On Tisha B'Av, it's time for Americans to step back from apocalyptic rhetoric 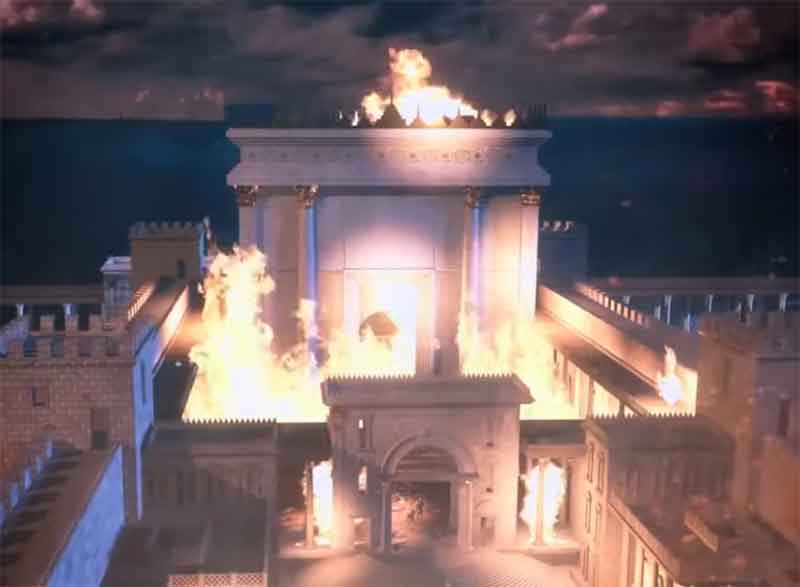 Americans are experiencing a summer of discontent in a way that exceeds any in living memory. The nation is divided not just along political lines but seems increasingly immersed in something much dangerous — a culture war in which both sides truly believe that not only will a triumph by their opponents bring ruin, but that the very existence of the republic and American democracy is at stake.

That's why both Jews and non-Jews need to pause this week and consider the lessons that the observance of Tisha B'Av: the day on the Hebrew calendar that marks the destruction of both ancient holy temples in Jerusalem, as well as many other catastrophes of Jewish history.

The day of fasting and reflection, which begins this year on the evening of July 29, is not observed by most non-Orthodox Jews and generally considered too depressing to have become part of secular American Jewish culture, which prefers holidays that follow a model that runs along the lines of "they tried to kill us, we won, let's eat."

But if there was ever a year when its lessons were needed by Americans of all faiths, it is 2020.

Tradition teaches us that the fall of the Second Temple in the year 70 occurred because of sinas chinam — senseless or baseless hatred — that undermined Jewish resistance during the siege of Jerusalem and great revolt against the forces of the Roman Empire.

A war that pitted the forces of a small nation against the world's only superpower wasn't going to have a happy ending, no matter how united the defenders of Jerusalem had been. But the rabbis who subsequently reconstituted Jewish faith emphasized the way that the Jewish rebels were divided into competing factions within Jerusalem's walls.

In the civil war that raged inside the doomed city, a Zealot faction destroyed food supplies that could have prolonged resistance. Their self-destructive behavior made the task of Roman conquest that much easier and provided Jewish history with a lesson of what not to do to survive in a hostile world.

It's an important lesson, but not one that most Jews — or non-Jews for that matter — find easy to follow.

The political lines dividing Americans are starker than at any moment in living memory. It's not just that Republicans and Democrats disagree about the issues. Most of the supporters of President Donald Trump and most of those who support his opponents seem unprepared to credit each other with good intentions, period.

For good or ill, Trump is a singular figure in American political history. His detractors don't just see an outlier who deeply distrusts the political establishment and thinks he has a mission to turn it upside down. They view him as uniquely evil, an authoritarian determined to destroy democracy. Epithets like "racist," "fascist" or "Nazis" hurled at him aren't just insults. A large number of Americans truly believe that these are accurate descriptions of him, and even worse, his supporters.

Trump supporters largely return the compliment and see Democratic spending programs about a "Green New Deal," open borders and revisionist views of American history as the thin edge of the wedge of a new kind of American socialism. Many disparage Trump's opponent — former Vice President Joe Biden — as a stooge of the far-left whose election will mean the triumph of radical forces that will destroy the rule of law and implement measures that will ensure that Democrats never lose another election.

Trump has helped coarsened discourse in a way that none of his predecessors have done. They are consequences that stem from how populist impulses turn up the political temperature in a way that makes the country angrier and less open to the "better angels" of our nature to which Abraham Lincoln once appealed.

Even if you think that his policies are misguided and his conduct is particularly unfit for the presidency, the rhetoric of his opponents is at least as irresponsible as anything Trump does.

The willingness of most Democrats to characterize the administration's recent attempt to defend federal facilities from violent mobs who operate under the banner of the Black Lives Matter movement as a "fascist" coup or the operation of "secret police" comparable to the Gestapo is as deplorable as it is absurd. The notion that the "mostly peaceful" BLM demonstrations, which again turned into violent riots this past weekend in some cities, are being wrongly suppressed by Trump is not a serious argument. One can agree or disagree with the tactic, though representing his actions as evidence of authoritarianism is pure partisanship intended to inflame public opinion.

In essence, both sides now see this November as a "Flight 93" election — a reference to the heroic effort of passengers on 9/11 to foil their terrorist hijackers' intentions to crash that plane into the U.S. Capitol — in which there is no choice but to do anything to save the nation.


That has set up a situation where Democrats are putting about incendiary claims that Trump won't go peacefully if he loses, and Republicans are afraid that if the president does beat Biden, his opponents won't accept the results either and will encourage rioters to set our cities aflame. The point is, as the lame-duck Obama administration's investigations of the Trump campaign's mythical collusion with Russia demonstrated, there may be a bit of truth to the assertion that no matter which side is defeated, the losers won't fully accept the outcome.

The stakes in this vote are high. But democracy doesn't work when those competing for votes won't accept the other side's legitimacy. Yet increasingly, that is how many Americans feel about their opponents in a political culture that has begun to resemble a tribal religious war.

Now is the time for both sides to step back from the abyss and speak to their opponents as fellow Americans as opposed to would-be totalitarians or barbarian hordes that must be destroyed. On Tisha B'Av, rather than only thinking of the suicidal fratricide that helped destroy the Second Temple, perhaps we should also ponder the way all too many of us are routinely seeking to demonize our opponents.

That may be too much to ask of some citizens so immersed in the hatred of Trump or his opponents that they believe the inflammatory rhetoric being fed to them by competing partisan media outlets. But that is what is necessary if, lip service about preserving democracy notwithstanding, we are to avoid scenarios where each side's worst fears become a reality.