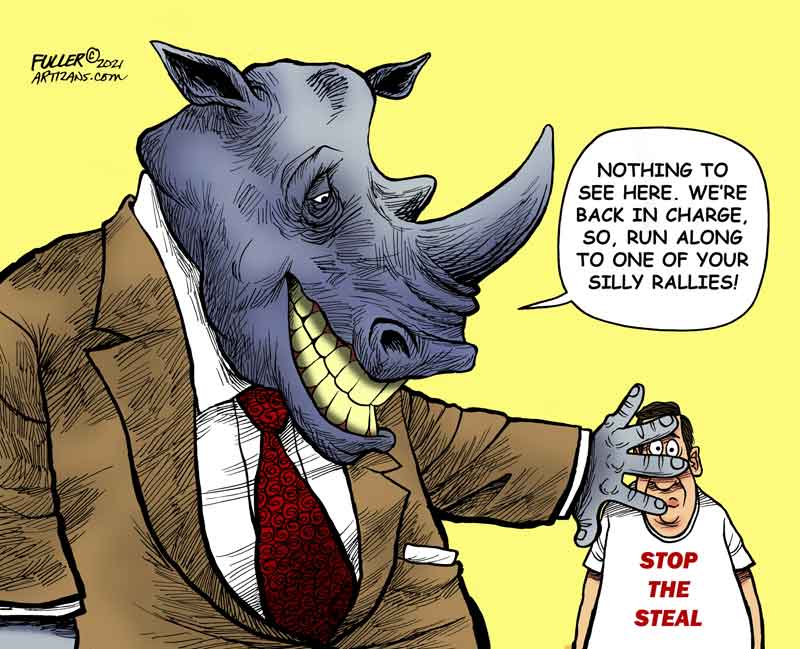 Before a roomful of Republican donors Monday, House Minority Leader Kevin McCarthy praised Donald Trump as the "secret weapon" in the GOP's quest to retake Congress, while Trump returned the favor by saying McCarthy had been with him from the beginning, according to two people in attendance at the event in Dallas.

But their united front disguised far more complicated relationships that have developed between the former president and elected Republican leaders like McCarthy - a fact that is now playing out in a series of primary proxy battles across the country. From Nebraska and Idaho to Pennsylvania and Georgia, Republicans have been actively campaigning - or quietly maneuvering - against Trump's picks in a way that could undermine his sway over the party.

One prominent example came Tuesday when Trump's endorsed candidate for Nebraska governor, Charles Herbster, lost in the GOP primary after significant opposition from Republican Gov. Pete Ricketts - the first of what could be several potential setbacks in coming weeks for the former president.

In several cases, some of Trump's own Cabinet members and advisers, along with other longtime allies in the Republican Party, are working or stumping for candidates running against Trump-endorsed candidates.

In his sharpest political challenge yet to Trump, for example, former vice president Mike Pence announced Friday that he would campaign for Georgia Gov. Brian Kemp, a Republican who is seeking re-election over Trump endorsee David Perdue. Trump has targeted Kemp - a key figure on his political enemies list - for refusing his efforts to overturn Joe Biden's 2020 win in Georgia, but has struggled to help Perdue gain traction ahead of Georgia's May 24 primary contest.

In Pennsylvania, former Trump secretary of state Mike Pompeo and Sen. Ted Cruz, R-Texas, a strong Trump ally, are stumping for Senate candidate David McCormick, who has also hired a coterie of Trump's former advisers - even though Trump is backing candidate and television personality Mehmet Oz in next Tuesday's Republican primary there.

And the Club for Growth, an influential Republican organization with deep pockets which had been aligned with Trump, is also buttressing Kathy Barnette, a third GOP Senate candidate in Pennsylvania. Before the May 3 primary in Ohio, the Club for Growth had enraged Trump by running ads against winning Senate candidate J.D. Vance that Trump viewed as negative about him - and then increasing their spending after Trump attacked them.

Publicly, McCarthy and the Republican Party have continued to show widespread obeisance to Trump, fearful of drawing his wrath or having his supporters turn on them. Trump's ability to anoint Republican candidates, and destroy opponents, has been one of his strongest weapons against losing control of the party.

"President Trump is already 58-1 this election season, and the power of his endorsement continues to propel candidates across the nation in a way no endorsement has before," said Trump spokesman Taylor Budowich, referring to a win-loss record pushed by Trump that contains numerous unopposed candidates. Budowich did not answer multiple questions about others working against Trump, including McCarthy.

And the efforts to undermine Trump's chosen candidates have been even more extensive behind the scenes.

One little-noticed House race in Washington state provides a case study of the covert machinations at play in a growing number of contests involving Trump-endorsed candidates and their rivals.

Sometime after a Trump-endorsed House candidate, Joe Kent, announced his candidacy for Washington state's 3rd district last year, McCarthy advised one Republican lawmaker in a private conversation not to endorse him, according to multiple people briefed on the conversation, who like some others spoke on the condition of anonymity to discuss a private exchange. A former Army Special Forces officer, Kent is running to replace Rep. Jaime Herrera Beutler, R-Wash., one of 10 Republicans who voted to impeach Trump in the House.

McCarthy told the Republican lawmaker that working against a GOP incumbent would be difficult to defend before the House Republican steering committee, the group responsible for dolling out committee assignments in the next Congress. The member then relayed the conversation to four people who spoke with The Washington Post. McCarthy's office declined a request for comment.

The quiet maneuvering - following McCarthy's efforts to fund Herrera Beutler's campaign through an agreement that was struck before her impeachment vote - has not soured the relationship between the two men. A Trump adviser said McCarthy and Trump remain on good terms.

"Kevin asked him not to endorse in that race, and he did it anyways," the person said about Herrera Beutler's reelection effort. "Kevin tells him a lot, 'Don't endorse this, or endorse this,' and he'll usually agree, but then later he might just change his mind and put it out."

America Rising, an opposition research firm that typically operates as an extension of the Republican Party, has also been sending someone to record Kent's campaign events in Washington in an effort to catch him in an embarrassing moment that could be used against him. America Rising did opposition research work in 2021 for Rep. Liz Cheney, R-Wyo., Trump's principal antagonist in the House, last year, according to Federal Election Commission records.

An America Rising spokesman declined to comment on who was paying for the tracking of Kent. The group's clients include the McCarthy-backed Congressional Leadership Fund, the Republican National Committee and the House and Senate campaign committees, among others, according to public filings. The National Republican Congressional Committee has said it is not involved in primaries this cycle. An adviser to Herrera Beutler said the congresswoman's campaign had not paid for the tracking.

The behind-the-scenes machinations have frustrated Kent, who has so far been able to secure only three endorsements from sitting members of Congress: Reps. Matt Gaetz, R-Fla.; Paul Gosar, R-Ariz., and Troy Nehls, R-Texas. Kent has said he would oppose McCarthy's bid for speakership if he wins Congress next year.

"I think he is horrible," Kent said of McCarthy in an interview. "McCarthy clearly despises the base of the Republican Party right now."

Kent recalled that the member of Congress who McCarthy had dissuaded from an endorsement told him over dinner this year "that McCarthy has threatened that he would withhold committee assignments and some funding."

Two other people, who asked for anonymity to describe private conversations, recalled the same comments at the dinner. Kent and the three other sources, who confirmed the events, requested that The Post withhold the name of the member of Congress as a condition of their interviews, so that the person would not face retribution from party leaders.

Trump has long been obsessed with his own endorsement win-loss record, often combining risk-taking endorsements with safer picks so that his percentage stays high. He endorsed Sean Parnell for the Pennsylvania Senate race before Parnell withdrew amid allegations of child and spousal abuse. Trump also backed a losing House special election candidate in Texas last summer. He has described himself as the "king" of endorsements, telling other Republicans it makes him more powerful.

Trump did not take those races into account when he announced that his primary win loss record was "58-1" Wednesday in a message on Truth Social, the social network he co-owns. The one loss he has recognized was Tuesday's defeat of Herbster, his pick in the Nebraska governor's race.

Many of Trump's advisers fear grim weeks to come, where his preferred candidates could lose in Georgia and Pennsylvania.

Ricketts, who had an oppositional relationship with Herbster long before the Trump endorsement, plans to campaign over the next week for Kemp in Georgia, along with Arizona Gov. Doug Ducey and former New Jersey governor Chris Christie - a fact that has also angered the former president.

In another message Wednesday, Trump denounced all three as "RINO's" - meaning "Republicans in Name Only" - and claimed falsely that they were already in Georgia campaigning for Kemp, who has declined to embrace Trump's false claims that he won Georgia in 2020.

"That tells you all you need to know about what you are getting Georgia - just a continuation of bad elections and a real RINO if you vote for Brian Kemp," Trump wrote on his social network.

Marc Short, a longtime aide to Pence and former director of legislative affairs in the Trump White House, is also working for Kemp in Georgia.

The Republican Governors Association, led by Ducey and Ricketts, has also been supporting Idaho Gov. Brad Little's re-election bid against Trump endorsee Lt. Gov. Janice McGeachin in the May 17 primary.

And in the Pennsylvania Senate race, Trump advisers say the former president was particularly annoyed by Pompeo's aggressive efforts against Oz - including calling a news conference last week to raise questions about Oz's dual U.S.-Turkey citizenship.

On Thursday, Trump aimed fire at Barnette, the third Pennsylvania Senate candidate, a relatively unknown insurgent who has been rising quickly in some polls with the support from the Club for Growth. Trump said in a statement that Barnette "will never be able to win the General Election against the Radical Left Democrats," arguing there are "many things in her past which have not been properly explained or vetted." He added that he could support her in the future if such questions were answered, though he did not identify what they were.

"It seems to be there is a streak of independence in the Republican Party," said Sen. Lindsey Graham, R-S.C., a strong Trump ally. "Trump has a very large impact on primary politics but it's not unlimited."

To be sure, Trump retains wide support across the party, and relatively few of the candidates in GOP primaries are distancing themselves from him. In a Washington Post-ABC News poll released earlier this month, 60% of Republicans and Republican-leaning independents said that GOP leaders should follow Trump's leadership, while 34% say they should lead the party in a different direction.

McCarthy, in the meantime, continues to work closely with Trump. The release of recordings last month that showed McCarthy criticizing Trump after the Jan. 6 attacks did not shake the bond. The two men continue to work closely with Brian Jack, a former Trump White House aide who now works for McCarthy and has been focused on shaping the midterms.

They had a long meeting recently that lasted several hours where Trump referred to McCarthy privately as "Mr. Speaker," according to two people familiar with the meeting.