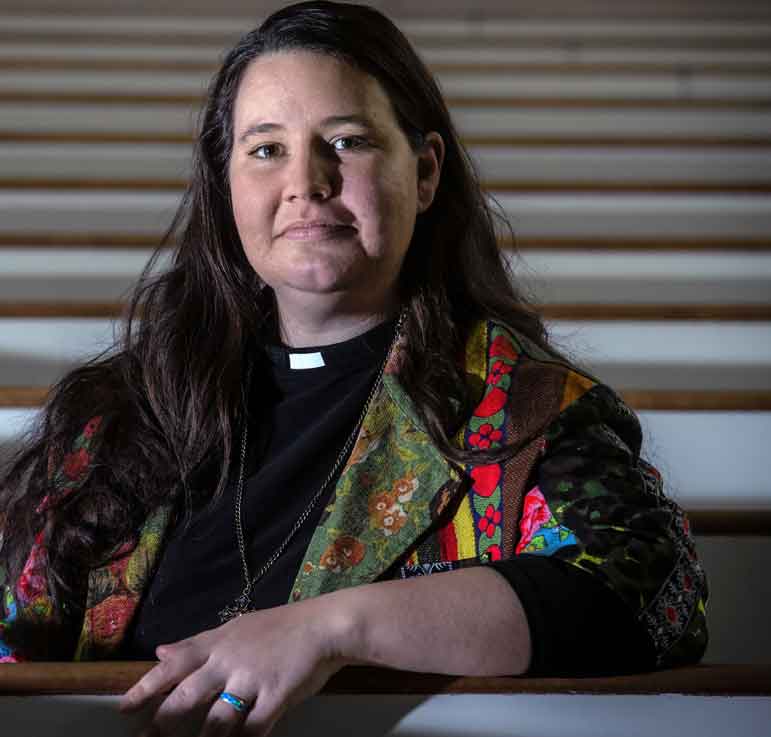 When the Rev. Kaeley McEvoy began at Westmoreland Congregational in 2018 she faced a question: Should she tell her new congregation she'd recently had an abortion?

McEvoy was already a reproductive rights advocate, and to her the experience wasn't in conflict with her faith. When the pastor and her then-boyfriend learned in 2016 that she was pregnant, the first place they went was to a cathedral, to pray - and to call doctors' offices in search of one to do the abortion.

Other visitors to the cathedral happened to try to enter the small chapel where McEvoy was on the phone, but her boyfriend turned them away, she remembers, saying "something holy is happening here."

But in front of her new congregation, she wondered and worried if they would lose respect for her. Westmoreland, like the suburb of Bethesda, Md., it sits in, is full of liberal people who politically support abortion access, McEvoy felt, but may not be ready to call it a social and theological good.

Then came laws in Texas and Mississippi to severely limit abortion, then the Supreme Court's decision to review the constitutionality of Roe v. Wade. And on top of that, pandemic isolation and virtual worship that, to McEvoy, made preaching about real, lived physical experiences feel urgent.

In November, McEvoy, a tall 29-year-old with a melodic preaching cadence, took the high, white pulpit at Westmoreland and said she had "never felt more known and heard and loved by G od than when I entered the doors of a Planned Parenthood." Then last month she addressed a group of Christian abortion access activists meeting in a Washington D.C. church: "Something holy is happening here, friends."

Last month, the most visible leader of Orthodox Christianity in the country, Archbishop Elpidophoros, said at the antiabortion March for Life that the biblical Mary "freely chose" to bring Jesus into the world, "and G od respected her freedom . . . we march not for coercion." The Rev. Pat Conroy, a Catholic priest and former longtime U.S. House chaplain, told The Post that while he views abortion as a "tragedy," conditions like poverty and oppression steal women's options. Ultimately, Conroy said, the choice belongs to the woman; "We should not make it for her." Both faiths teach that life begins at conception.

At the end of January, 450 clergy and other faith advocates met virtually for a new, two-day event called SACRED that presented reproductive rights as "one of the critical justice movements of our time," along with those for racial and sexual minorities, immigrants and others. More than 1,500 [secular] rabbis have signed on to a program called Repro Shabbat in which congregations study Jewish texts and teachings about reproduction and make public efforts at "celebrating the critical importance of reproductive health access, reproductive rights, and reproductive justice." This is the second year of the program.

And 54 faith groups signed onto an amicus brief last fall against the new Mississippi law that bans abortions after 15 weeks, saying there are diverse religious views about when a life begins and that banning abortion violates American women's constitutional right to religious freedom.

Mary Ziegler, a visiting professor at Harvard Law School who focuses on the legal history of reproduction said the possibility of Roe v. Wade being overturned and new state measures that include criminal penalties for doctors and civil fines for women "has made this more salient."

"Even for ministers who say: 'I don't support abortions, but I can't condemn people for having them.' Those people are feeling the need to speak up more because things are coming to a head," Ziegler said. "It's easy for a lot of people to talk about what you should do when it's not illegal. Now states can really punish people. I think for people of faith, ethical and religious arguments will be really central to that. Criminal law is intersecting with questions of morality and faith."

Comments like Elpidophoros' argue for the theological right of women to bodily autonomy and health and say it's theologically wrong to uniformly choose a fetus over a woman. Like SACRED's curriculum about the biblical story of creation in Genesis as a process with steps - not a light switch moment as to when "life" begins. Like those in the upcoming book by Baptist pastor Katey Zeh "A Complicated Choice," that looks at societal conditions that lead to unintended pregnancies and those that leave many women without parenting support.

In the years just before and after Roe v. Wade, the tables were somewhat flipped, Ziegler says. The antiabortion side characterized itself as a secular, civil rights cause, allowing it to draw a more diverse support base than only Catholics (who were the founders of that movement). Abortion rights advocates, on the other hand, often made a religious case, and one of the big organizing groups back then was the Clergy Counseling Service. Most mainline Protestant denominations and non-Orthodox Jews as well as the Southern Baptist Convention adopted positions in favor of abortion legalization.

Polling has always made clear there are many millions of religious people who favor some type of abortion access, and it was religious activists in the 1960s and 1970s who led the movement.

It's not American views on abortion access overall that have changed since then, said University of West Georgia historian Daniel Williams, who focuses on abortion, it's that the issue has become more politicized and polarized. Public opinion polls have consistently shown public support for Roe v. Wade for decades.

While the legal landscape is a big reason people are speaking out, there are other factors.

One, say people who follow the topic, is a society paying more attention to the full experiences of women. Michal Raucher, a Rutgers University anthropologist who studies Jews and reproductive issues, said the growth of women in positions of leadership in all denominations of Judaism has put more attention and public space for topics like infertility and miscarriages.

George Demacopoulous, a Fordham University theology professor and expert on Orthodox Christianity noted that abortion is legal in every major Orthodox country. While the faith views abortion as tragic and wrong, he said, it also respects the autonomy of women. Church and state are generally separate, he said, and abortion is more divorced from politics.

"In the United States, the debate is very much positioned as these two goods at war with one another; we're being asked to pick. And he's saying that's theologically wrong," he said of Elpidophoros. "It's a Christian truism that you can hold seemingly contradictory views. Christian moral teaching isn't black and white."

The Rev. Angela Williams, a Presbyterian USA pastor and lead organizer of SACRED, said a few years ago she considered herself "pro-choice" but was taken aback by people in her seminary who said they were "pro-abortion." A few years of working with women in a wide variety of situations, from homeless women who couldn't access menstrual products to sexual assault victims, Williams said she came to see unwanted pregnancies as complex situations without necessarily simple answers.

"Being in this work and spending time with people and hearing more of the stories and bringing their experiences out of the shadows helped me to undo the stigma around abortion. [Religious advocates for abortion rights] have given up the public square, letting the dominant narrative be based on some readings of Bible verses. And that doesn't represent real people, real lives, real faith."

Some advocates are weaving the subject of abortion into their spiritual practices. As part of Repro Shabbat, people baked challah breads in the shape of a uterus. Some made TikToks of Jewish teaching set to music samples. Others are looking to special after-abortion prayers written decades ago by more liberal clergies such as those on the site RitualWell.

One night last week a group of about 60 Jewish women listened to a rabbi, who declined to use her name to avoid judgment or shame, for the first time tell the story of two abortions she had about a decade ago.

She talked about Judaism, which does not legally see a fetus as a person, but as a potential life. While abortion is never considered murder and is [in rare instances] allowed, its use has limits related to the health of the mother. The question is: What kind of limits? Her voice slowed as she talked about two very sick fetuses, and how she was told the babies would die soon after birth. As someone with a disability herself, the rabbi said, she was especially conflicted. At the same time, she was told the births could damage her ability to have more children.

Talking with another rabbi, she recalled, eased her mind. She'd decided to speak out now because she feels more strongly about abortion rights and wants to encourage other Jews to go from being politically supportive of choice to being openly stigma-free. "Privacy" around sexual issues can transform into shame around them, she said.