From Convicted Murderer to Exoneree to Law Grad 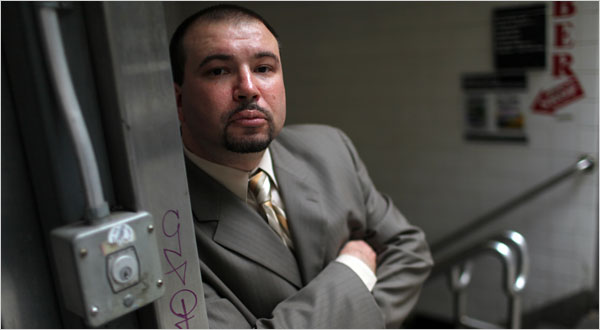 What would you do if you were falsely accused and convicted of a brutal rape and murder you didn't commit?

How would you handle a violent maximum-security prison, sentenced 16 years to life, at age 17?

And where would you go, what would you choose to do, if you won your freedom back after full exoneration?

Jeffrey Deskovic, 45, graduated from Pace University School of Law three weeks ago to rousing cheers from friends, family and faculty. On its own, the achievement warrants celebration. Any graduation does. But Deskovic's feat is just one of an extraordinary set of milestones in the extraordinary life of an extraordinary man I'm honored to know and support.

In November 1989, Deskovic's Peekskill, New York, high school classmate, 15-year-old Angela Correa, was raped, beaten and strangled to death. Detectives decided that Deskovic, who did not know Correa, had acted excessively upset at the murdered sophomore's memorials. Police succumbed to tunnel vision and confirmation bias, misinterpreting Deskovic's amateur passion to help solve the crime as a sign of guilt. After speaking with him multiple times, steadily feeding him information about the case, they brought the 17-year-old Deskovic in for a polygraph.

The young teen who had never been in trouble with the law was interrogated for more than seven hours without a lawyer, family member or food. Detectives bullied, cajoled and lied to him about failed the testing. It's a classic recipe for a false confession and undue process. The coercive interrogation ended with Deskovic in a fetal position under the polygraph table.

Despondent, Deskovic attempted suicide twice before trial. In January 1991, he was "convicted by jury of 1st degree rape and 2nd degree murder, despite DNA results showing that he was not the source of semen in the victim's rape kit." Deskovic told Westchester Magazine: "It just didn't seem real. It was like I was observing it from the outside. I felt I was in Fantasyland."

Maintaining his innocence from the start, the sensitive high schooler who grew up behind bars earned an associate's degree and appealed to anyone on the outside who would listen. After multiple rejections, the Innocence Project took up his case and won postconviction DNA testing that identified the real rapist and killer: a man named Stephen Cunningham.

Injustice compounded injustice: While Deskovic was paying the price for the guilty man's sins, Cunningham was on the loose in 1993, committing a second murder. The victim was Patricia Morrison, his girlfriend's sister. He was in prison for that tragically preventable crime when new forensic testing methods yielded a hit in a state DNA database of convicted felons and Cunningham confessed to killing Correa.

In 2006, Deskovic was freed and won a judicial determination of actual innocence. He received an apology from an assistant district attorney, along with multimillion-dollar civil suit awards from New York state, Westchester County, Peekskill and Putnam County. Transitioning to life as a free man was not easy, but Deskovic has not wasted a single moment of it as an exoneree. On a whirlwind quest to prevent and undo miscarriages of justice like the one he suffered, he has earned a bachelor's degree, a master's from John Jay College of Criminal Justice and now a law degree (making the dean's list the last four semesters of a hectic year).

While in law school, he traveled to Armenia and Argentina to give wrongful conviction presentations, played an instrumental role in prosecutorial misconduct reform in New York state, gave dozens of radio, TV and documentary interviews (including one for my 2017 program called "Railroaded: Surviving Wrongful Convictions"), started the Deskovic Foundation for Justice (which has helped exonerate seven people), and taught multiple classes on criminal justice to judges and police academies.

Phew! Is there a bucket list that can match this one?

It's Deskovic's unique willingness to reach out to law enforcement and enlighten them, instead of to demonize them, that makes him an invaluable leader in criminal justice reform. Lt. Michael Devine of the Bergen County Law and Public Safety Institute was so impressed with Deskovic's presentations to corrections recruits that he successfully requested that the exoneree become a certified instructor for the New Jersey Police Training Commission.

Dr. Kevin J. Barrett, a 32-year veteran of the Englewood, New Jersey, Police Department and chair of the criminal justice department at Rockland Community College, says his students were "mesmerized" by Deskovic's presentation and "will carry the lessons they learned from Mr. Deskovic for the next 25 years of their careers. He has a much needed story to tell."

And the rest of this story has only just begun.


Deskovic will take the bar exam in eight weeks. His foundation just helped win retrial scheduled in September for Andrew Krivak, a man wrongfully convicted of the rape and murder of a 12-year-old girl in Putnam County, N.Y. in 1997. No physical evidence connected Krivak or his co-defendant Anthony DiPippo to the victim or the crime scene. The prosecution relied on a fake polygraph exam administered by the same official involved in Deskovic's wrongful conviction. (I told you Hollywood couldn't make this up!)

DiPippo, exonerated in 2016 after three trials and 20 years in prison, attended Deskovic's graduation with hundreds of others. He hailed his friend as "the future of the grass-roots innocence movement."

I agree, which is why I have lent my time, heart, and financial support to the Deskovic Foundation and hope you will, too. You can find out more about this tireless human being at https://www.deskovicfoundation.org/