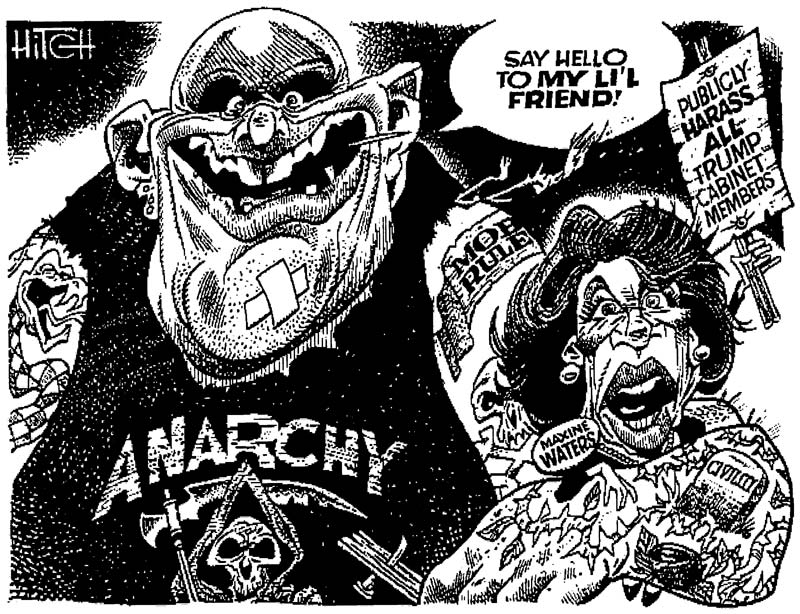 What a sick joke. Congresswoman Maxine Waters, one of the loudest mouths leading the impeachment circus against former President Donald Trump over the events at the Capitol on Jan. 6, is a brazen racial insurrectionist. The sixteen-term Democrat from South Central Los Angeles has been pouring verbal gasoline and tossing rhetorical Molotov cocktails into the public square since the 1992 L.A. riots.

Now she's the arbiter of civility and keeper of social order? LOL.

Waters blasted Trump for telling his supporters on Jan. 6 to "be tough" and "take back their government" — standard, peaceful stump speech fare. She blames our 45th president for the actions of a few who ignored his explicit call to remain "peaceful," while denying that her own fighting words and direct embrace of riots have contributed to decades of violent incitement. Trump's impeachment trial lawyers rightly allude to her instigation of mobs formed against administration officials at restaurants and public spaces. In their trial brief, Trump's team contrasted the president's anodyne encouragement for conservative activists to "fight like hell" for their country with Waters' endorsement of physical harassment against Trump's cabinet members:

"If you see anybody from that cabinet in a restaurant, in a department store, at a gasoline station, you get out and you create a crowd," Waters shrieked in 2018 at a rally in Los Angeles. "And you push back on them. And you tell them they're not welcome anymore, anywhere."

That's exactly what left-wing professional agitators, from Occupy ICE to antifa to Black Lives Matter to Smash Racism D.C. to the Sunrise Movement, have done over the past two years, targeting prominent Republicans and conservatives and their families on the streets and in their own homes.

But the fact is that Trump lawyers only scratched the surface of Waters' divisive and destabilizing diatribes.

Waters made common cause with her neighborhood gangsta rappers who stoked the violence, calling them "poets" and "children" expressing their "pain." I remind you that shortly before the 1992 L.A. riots, rapper Ice Cube (a denizen of Waters' district and a member of the cop-killing glorifiers at rap group N.W.A.) had penned the hate-filled song "Black Korea" for his best-selling platinum solo album, "Death Certificate." He seethed against law-abiding immigrant entrepreneurs in his 'hood and threatened to burn their stores "right down to a crisp":

They hope I don't pull out a Gat, try to rob

Their funky little store, but, b-tch, I got a job.

So don't follow me up and down your market

Or your little chop suey ass will be a target

Of a nationwide boycott.

Juice with the people, that's what the boy got...

...So pay respect to the black fist

Or we'll burn your store right down to a crisp.

Waters told the L.A. Times in May 1992 that "riot is the voice of the unheard." She openly embraced the term "insurrection" as a substitute for "riot" in a 1992 interview with Katie Couric. A quarter-century later, in an anniversary interview with the Huffington Post, she again used the term "insurrection" to celebrate the implosion of L.A. and stoking of anti-white, anti-Asian violence as a "defining moment in the way that black people resisted."


"Resistance"? Sixty people were killed, 2,000 injured, $1 billion in damages inflicted, and $700 million in federal aid injected to quell the arsonists, looters and shooters simply expressing their "pain." "Roiling Waters" excused the violence repeatedly by defending the "righteous anger" of the rioters against police, innocent white bystanders like trucker Reginald Denny (nearly beaten to death by Waters' gangsta buddy Damian Williams), and the Korean shop owners (forced to take up arms and take to their rooftops to defend their lives and livelihoods when the cops yielded to the mob).

Now, nearly 30 years later, the wealthy and powerful black congresswoman whose rise to power is defined by violence-inducing and violence-excusing racial demagoguery, demands "accountability" for words to remove a president no longer in office.