There's no escape from L.A. 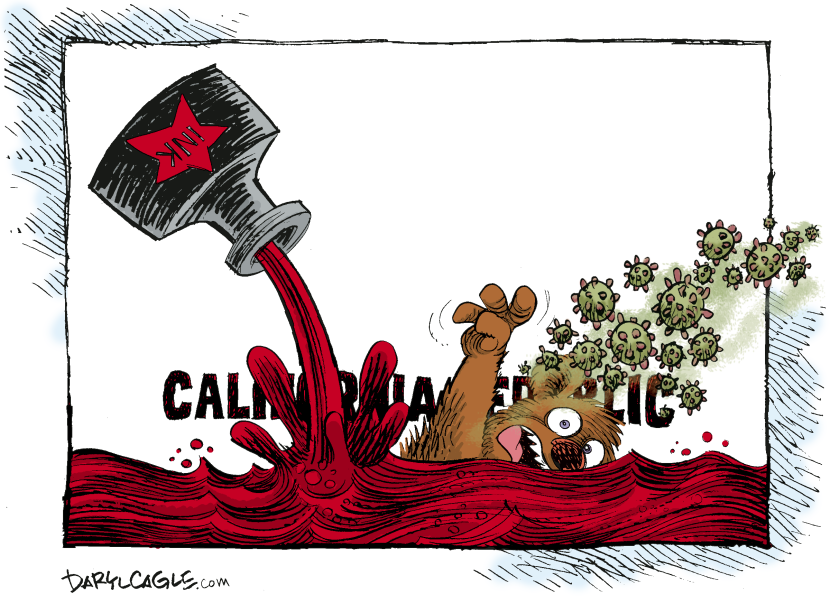 I thought I was going to escape the madness of the L.A. Lockdown.

I thought if I rented a small weekend getaway house in a rural part of the state two hours north, my family and I could eat outdoors at a restaurant again, or at least leave our basement without a note from our tyrannical governor.

But I thought wrong.

Two weeks ago life in empty and beautiful Santa Ynez Valley – where my father had his ranch and I've been visiting since 1974 – was about as normal and civilized as you could hope for these days.

Restaurants were open for outside dining. Wineries were open.

The local residents – about 20,000 all told – dutifully wore their masks, washed their hands and didn't have to work very hard to practice safe social distancing.

As an extra bonus, unlike LA, there weren't tens of thousands of homeless people and drug addicts living in tents on the sidewalks of Solvang, Los Olivos or Santa Ynez.

But then Newsom and his health experts suddenly decided to change the rules and make the Santa Ynez Valley a part of the Southern California lockdown region.

It didn't matter that the rural valley has hardly been touched by the coronavirus.

Since March there have been 276 cases of COVID-19 in the valley and only seven people have died. In crowded L.A. County, where 10 million live, the death toll is nearing 8,000.

But thanks to the "scientific reasoning" of Emperor Newsom, the Santa Ynez Valley was ordered to do what L.A. had to do.

Restaurants were told to close except for take-out business. Along with the valley's restaurant employees, hair-cutters and spa workers were thrown out of work.

Welcome to L.A., Santa Ynez Valley, whether you like it or not – and believe me, you won't.

In Los Angeles I live around the corner from the Pineapple Hill Grill & Saloon, the restaurant whose owner Angela Marsden posted a powerful video about the devastating impact the lockdown was having on her business and her entire industry.

Marsden's place was closed down with two days' notice right before Thanksgiving when outdoor dining was outlawed by the state.

As she showed in her emotional video, which went viral, Marsden – who had taken an $80,000 loan to meet the city's outdoor dining rules – got the shaft from the city.

At the same time she was forced to close, an NBC production company had been given a permit by the city to erect a huge outdoor catering facility for 200 people directly across the street.

A GoFundMe page has raised nearly $200,000 for Marsden, which I hope will help her survive.

But what about her employees? All of L.A. is under a stay-at-home order will be locked down until Dec. 28 – at least.

So where are the tens of thousands of out-of-work restaurant employees in L.A. going to get help?

We know Newsom and Los Angeles Mayor Eric Garcetti won't do anything. They've proved over and over they don't care about the little guys who are the chief victims of their severe, unpredictable and arbitrary public health decrees and lockdown policies.


My wife Colleen and I have decided to do our small part to help L.A.'s crushed restaurant industry by helping an unemployed server at our favorite family-style restaurant.

She's a part-time actress, too, so she's not working anywhere now, so we're going to "adopt" her for the Christmas holidays.

We're going to pay her rent, pay her bills, get her a Christmas tree – whatever helps.

We challenge everyone in L.A. who still has a job and a heart to adopt your favorite server and do what you can to help them.

Meanwhile, at this point, there's only one way to reopen L.A., the Santa Ynez Valley and the rest of the state.

It's for everyone who works in restaurants, bars, entertainment venues, gyms and personal care businesses to unite, safely open up their doors on the same day, flip the bird to the governor and see what happens.