All is Fair in the War on Trump 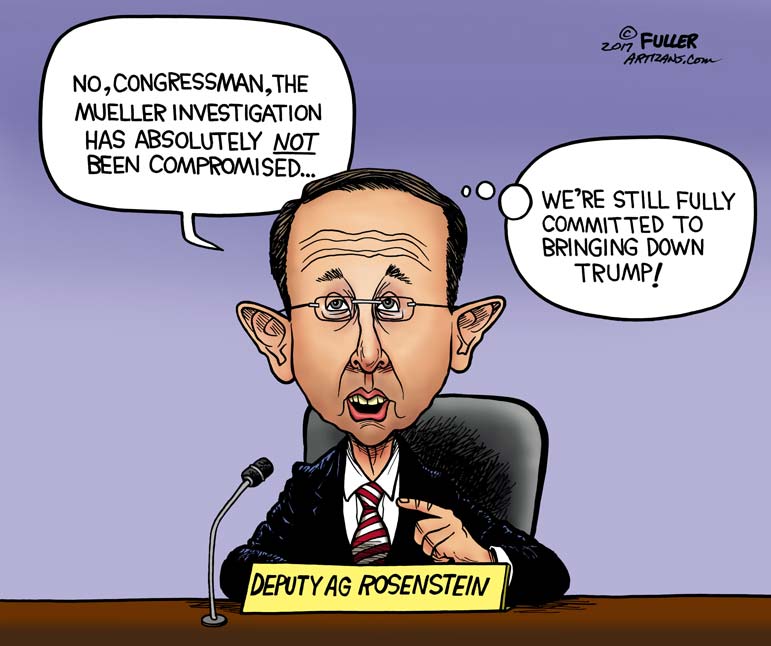 It's not like it was something we didn't already know.

But what the FBI and Special Counsel Robert Mueller's did to President Trump's former National Security Adviser Michael Flynn is fresh proof that there are two kinds of justice operating in the Washington swamp.

One kind - the mean, devious, throw-the-book-at-'em kind - is used for prosecuting Donald Trump and his people.

The other kind of justice - the nice, easy-going, so-what kind - is used for not looking into the law-breaking email fiascos of Hillary and the financial fishiness of the Clinton Crime Syndicate.

Hillary continues to skate free, unbothered by the FBI or any federal agency for the dirty things she and the Obama administration's injustice department did during the 2016 election to try to defeat Donald Trump.

But not General Flynn.

His life was ruined by the FBI bosses who set out to nail him - and did.

Comparing transcripts from phone wiretaps, the FBI caught Gen. Flynn lying about what he said in a phone call with former Russian ambassador Sergey Kislyak in December of 2016.

Flynn's terrible crime - a single count of lying to an FBI agent in 2017 - obviously had nothing to do with the Trump election team colluding with the Russians, mainly because there was no collusion.


But this week Flynn's lawyers alleged that the FBI had essentially tricked Flynn into not having a lawyer present when he was interviewed in his White House office by two agents.

U.S. District Judge Emmet G. Sullivan, who's overseeing Flynn's case, has turned the tables on the FBI. Smelling a rat, no doubt, Sullivan has ordered Mueller's office to turn over all the documents it has from Flynn's FBI interview.

We can hope that Sullivan shames Mueller for his prosecutorial abuse and decides that the FBI interfered with Flynn's constitutional right to counsel.

In the meantime, the harm done to Flynn can never be undone or repaid.

Though Mueller the Merciful has recommended that he get no prison time, the general was forced to sell his home and went bankrupt defending himself.

What happened to Gen. Flynn is a textbook example of our country's two-tiered system of justice - one for Trump and Republicans and one for the Clintons and Democrats.

The time, money and energy spent prosecuting - and persecuting -- Flynn also shows just how deranged the hatred of Donald Trump has become.

The liberals, the media, the Democrats and the Deep State partisans in the FBI and other government agencies are willing to drop napalm on anyone connected with President Trump.

Trump's enemies say that if we knew about Stormy Daniels and the other women in 2016 we wouldn't have voted for him.

Trump supporters knew the kind of man they were voting for. They accepted it. They knew anything was better than four years of President Hillary.

The bottom line, which liberals can never see, is that Trump's supporters don't care what he did with Stormy Daniels or what he paid her or anyone else he had sex with to keep quiet.

I don't care about Stormy Daniels or Trump's other sexual flings, either.I don't even care if he slept with my gardener. As long as he didn't sleep with Hillary, I'm good.