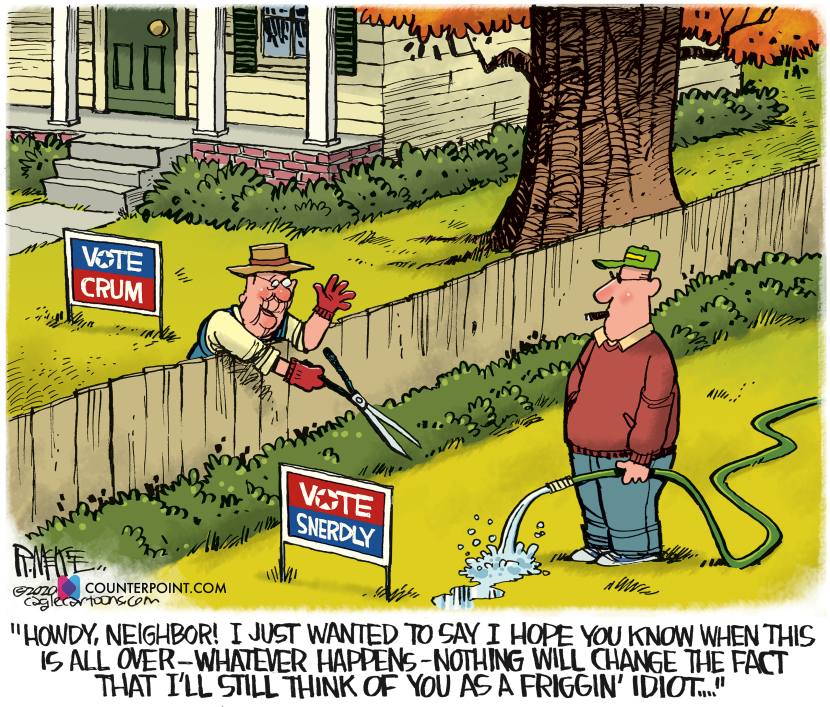 It's crazy political times like these that I long for how quickly, simply and peacefully the 1980 presidential election ended.

That was the year President Jimmy Carter called my father at 5 in the afternoon of Election Day – while he was in the shower – and congratulated him on winning the presidency.

Votes were still being counted and probably half the country hadn't voted yet, but by early evening Carter already knew he was being swept out of office by the Ronald Reagan landslide.

On Tuesday, Democrats were expecting to see a repeat of 1980.

They thought President Trump would be so far behind by dinner time that he'd have to call Joe Biden and concede.

For months they and the country's inept pollsters, blind pundits and dishonest journalists had convinced themselves that a mighty Blue Wave was coming.

A Biden Blowout was going to sweep away Donald Trump, half a dozen senators like Lindsay Graham and dozens of Republican House members and put Democrats in charge of both houses of Congress and the White House.

But their Great Blue Wave turned out to be a Blue Mirage.

It looks like after a few weeks of legal challenges and a recount or two, Joe Biden is going to win, which would be a huge and impressive victory for the Democrats.

But otherwise, Election 2020 has been a political disaster for their party.

Democrats lost at least six seats in the House and legislative majorities in several states. But most important, they didn't come close to taking over the Senate.

That wrecked the dangerous pipedreams of the party's old and young socialists to get rid of the filibuster and pack the Supreme Court.

Ditto for Joe Biden's promises to implement the Green New Deal, destroy our energy industry and punish the rich by jacking up taxes on incomes, capital gains and corporations.

Meanwhile, Donald Trump may be on his way out but his Republican Party will live on and haunt the Democrat Party.

In four years Trump has single-handedly enlarged, energized and diversified the old GOP, turning it into an energized America-first movement for millions of everyday citizens.

And though he was unfairly called a racist and a white supremacist by Democrats and the media every day for almost five years, he shocked the Democrats and impressed the liberal media this week by capturing a historic number of black, Latino and Jewish votes.

Based on early exit polls, Trump won 26 percent of non-white voters. For a Republican, that's huge.

President Trump was on his way to doing what many of us in the Republican Party knew we needed to do decades ago.

During the Bush II years, when I spoke to a few hundred fellow Republicans during a breakfast meeting in Florida, I told them the party had been more diverse when my father was president.

I said we needed to reach out to minorities. To prove my point, I said, "Will all the blacks and Hispanics eating breakfast with us this morning please stand up."

They all looked around at each other. No one stood. The only blacks and Hispanics in the room were serving breakfast, not eating it.

I told those Republicans that if the Party of Reagan was to survive it had to reach out to blacks and Hispanics every single year, not every two years or four years, but no one really listened until an outsider named Donald Trump came along.

President Trump's days may be numbered. But whether you are a Republican who loved him or hated him, you should give him the credit he is due.

He’s shown Republicans the roadmap to the black, Hispanic and Jewish voter. If we hope to take back the House, keep the Senate and win the White House in the future, we need to follow that map.