Raising Our Kids to Hate 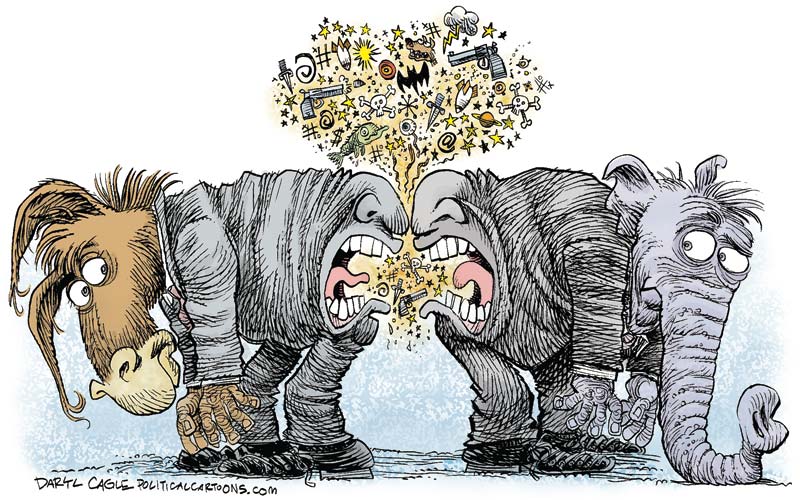 A Jeb Bush tweet this week got me thinking about some of the ways our nasty partisan politics has been hurting our kids.

Paraphrasing Jeb, he asked, "How can parents teach their children that using bad language is wrong when we have a president and members of Congress who constantly use profanity to talk about each other?"

Jeb's tweet also reminded me of something a wise Sunday school teacher of mine said once: "There are more things 'caught' than 'taught.' "

I often quote that line when I'm invited to speak to parents, and I thought about it again on Wednesday when I took some kids on a tour of my dad's library in Simi Valley.

It was nice to go to the Reagan Library and be reminded of the positive attitude my father had about politics, his political opponents and people in general.

On my father's tomb, for example, is the message, "I know in my heart that man is good, that what is right will always eventually triumph and there is purpose and worth to each and every life."

I don't know how many of the kids I was with the other day were equipped to catch that optimistic message.

It's really sad that they're growing up in such a hateful political and cultural environment that has so little room for tolerance or civil debate.

Even a beloved liberal comedian like Ellen DeGeneres can get blasted by the Hollywood left just for sitting with her friend George W. Bush at a football game.

What happened to DeGeneres is a sign of how stupid and low our nasty partisan politics are.

Liberal or conservative, Democrat or Republican, you can't be seen in public with someone from the other political tribe without catching hell or hate from your own tribe.

Those kids I was with at the library were too young to know it, but there was a time before Twitter, Facebook and 1,000 cable TV channels when the most powerful people in politics could disagree vehemently yet still be civil to each other.

One of the most famous examples of that political civility and mutual respect was the relationship my father had with the Democrat Speaker of the House, Tip O'Neill.

Not as well-known was the time my father was asked in 1985 to give a fundraising speech for the John F. Kennedy Library.


In 1960 my father had campaigned hard against JFK. But when he was President and he was asked by John and Caroline Kennedy to help them kick off an endowment drive for the JFK Library, he did it graciously and enthusiastically.

Praising JFK for being, among many other things, "a patriot" who had "a good hard, un-illusioned understanding of man and his political choices," my father admitted he had not supported Kennedy for president.

"But you know," he said, "it's true: when the battle's over and the ground is cooled, well, it's then that you see the opposing general's valor."

That kind of civility being shown to a political opponent could never happen today in Washington, where Democrats and Republicans hate each other, call each other bad names and refuse to cooperate or compromise.

As for our kids today, they're being taught by the bad example of adults to hate the political tribe they don't belong to. It's reinforced24/7 on TV, in social media and college campuses.

If we're not careful we're going to end up like Israel, where the Palestinian kids and the Israeli kids don't play with each other and are raised from infancy to hate each other.

Maybe there's still time for our children to turn to their parents and tell them it's time for them to grow up and stop hating.