No justification needed for 'peaceful rioting' 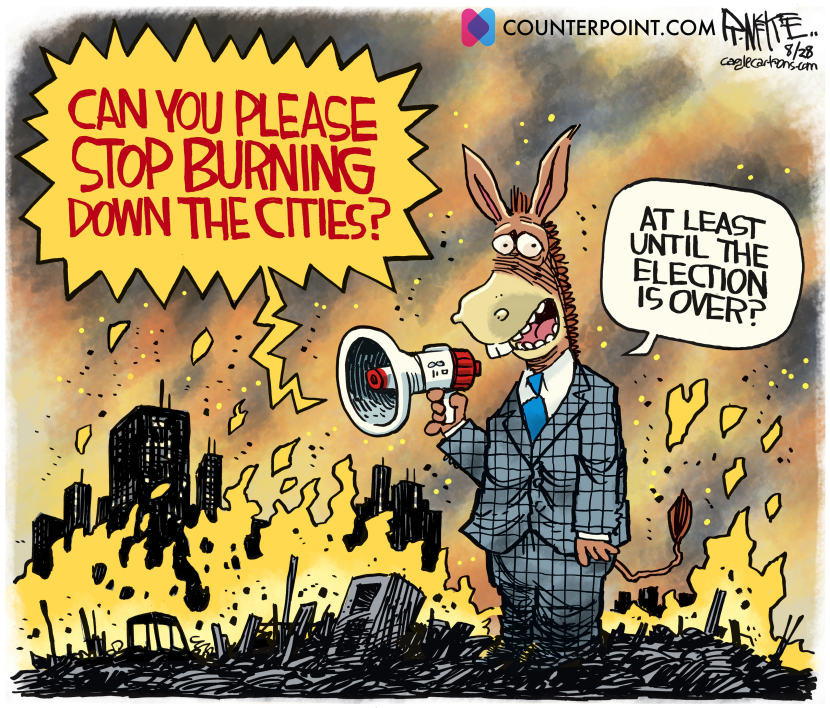 It didn't matter what the findings of the Breonna Taylor grand jury were going to be.

Black Lives Matters and their sympathizers were well prepared to riot on Wednesday night in Louisville and other cities, like New York and Washington.

The video of that rented U-Haul filled with big signs and who-knows-what-else is all the proof you need that their "peaceful protest" was a planned operation.

Taking over the streets, burning down buildings, destroying businesses, shooting things at police and roughing up ordinary citizens was like a summer job for protesters in dozens of our cities.

Now it looks like it's going to be their full-time fall job, too.

Whether it was a response to George Floyd's death at the hands of Minneapolis police, the shooting of Jacob Flake by police in Kenosha or Taylor's accidental shooting during a late-night drug raid gone bad, the rioting has been done under the pretext of seeking justice for black Americans who were victims of allegedly racist cops and a supposedly racist justice system.

But the young Black and white mobsters of 2020 America aren’t doing their cause much good with their nightly melees.

All they've done is make a lot of new enemies among white people, create new Trump voters and scare the crap out of ordinary citizens who get caught up in the violence or watch it nightly on TV.

I can't tell you how many people have told me how frightened they are for the safety of their children and the future of the country they'll grow up in.

Other good people I've talked to lately have completely changed the way they feel about Black people because of the riots and the rise of the radical BLM.

These people were never even close to being racists before, but now they are.

That's what BLM wants, of course.

Their goal is not to get justice for the few unarmed Black victims of police violence in the U.S. each year or to solve the social, economic and policing problems of Black people and their communities.

The BLM's radicals are open Marxists who want to create chaos, foment racial hatred and tear down America's founding values and democratic ideals.

So far, the BLM has been successful, thanks to the great job the mainstream media have done to ignore its true nature and goals, spread its propaganda and lies and treat it like it's the League of Women Voters.

For six months – until the grand jury's report Wednesday – the media gave us the BLM's version of how Breonna Taylor died in her apartment March 13.

We were told it was a no-knock narcotics warrant. We were told Taylor was shot in her bed. We were told that trigger-happy racist police officers were at fault and should be charged with murder.

But they were BLM lies.

According to the evidence gathered by the grand jury, it was not a no-knock warrant. The police knocked and announced themselves several times before they broke down the door.

Taylor's boyfriend, who said he thought the police were intruders, admitted he fired the first shot, hitting an officer in the leg.

The police had a legal right to return fire, which is why the grand jury decided no cop would be charged with homicide. Taylor, killed accidentally when police fired 32 shots, was not in her bed.

Breonna Taylor's death was a tragic mistake. But the sad truth is, if her boyfriend didn't shoot at the police first, she'd still be alive.

If her boyfriend had killed the cop he shot, by the way, the number of police officers killed in the line of duty so far this year would be 39 instead of 38.

No one has been marching or rioting in the streets of our cities to protest the deaths of those cops.

And the mainstream media, which hardly bothers to cover them, are too busy portraying cops as racist murderers to worry about who's going to be around to defend law-abiding citizens when the police are gone.