A tale of two conventions 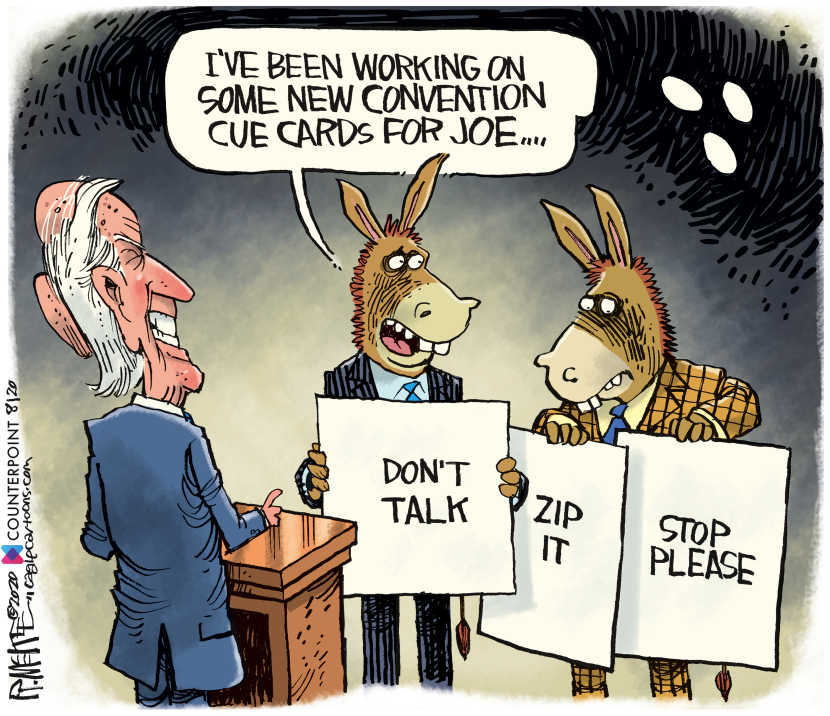 The latest Republican National Convention was the best I've ever watched.

The locations and settings were great.

Melania did a fine job in the White House Rose Garden.

Secretary of State Mike Pompeo spoke from somewhere in Israel.

In addition, the GOP's diversity quotient was off the charts.

The impressive speakers included Tim Scott (the U.S. Senator from South Carolina whose inspiring life story is summed up by "From Cotton to Congress"), Nikki Hailey (the Indian-American former governor of South Carolina) and young Daniel Jay Cameron, the first black attorney general of Kentucky.

Plus, there were so many women coming to the podium over the first three days you couldn't count them.

Along with Trump's daughters, Trump's counselor Kellyanne Conway and rising star Gov. Kristi Noem of South Dakota. There was also Kim Klacik, the dynamic young Republican running for Congress who filmed her remarks in the urban ruins of Democrat-run Baltimore.

Best of all were the speeches.

The speakers were not afraid to be political.

They slapped around Joe Biden and the radical Democrats who control him a few dozen times, and they stood up for unborn babies, school choice and strong borders.

But they didn't deliver a string of cliched political sermons like the ones we've had to endure at past national conventions.

The RNC speeches were what good political speeches should be – mercifully short, tight, well-written and delivered like mini-Ted Talks.

Many were emotional personal stories told by ordinary Americans who had been helped by the Trump administration or who had positive things to say about the troubled country they loved.

My favorites included a lumberjack from Wisconsin, a Cuban refugee who appreciates the priceless gift of freedom and a good-hearted cop from New Mexico who adopted the baby of a homeless drug addict.

I mean, who knew a lumberjack from Wisconsin could be such a good public speaker?

The way the Trump campaign put their convention together was not only politically effective and first class all the way, it was actually great prime-time television.

Overcoming the limitations imposed by the coronavirus pandemic, the RNC used technology, the trappings of the presidency and a diverse line-up of great young speakers in many smart and entertaining ways.

The Republican convention was a fast-moving, upbeat circus compared to the Democrats' draggy snooze-fest, which looked like it was shot in an airplane hangar and felt like a Zoom meeting of angry politicians and spoiled Hollywood celebrities.

I swear it was televised in black-and-white.

The contrasting conventions prove that what my father said decades ago about the difference between Republicans and Democrats is still true.

Paraphrasing him, he said with Republicans it's always morning in America and with Democrats it's always darkness – midnight in a rainstorm, I'd say.

The DNC was not just dull, boring and over-weighted with the dead ideas of socialism. It was a depressing and unrelentingly negative affair.

The ordinary Americans they found to speak came to tell sob stories about how evil Donald Trump was and how much his policies hurt them.

Based on how they portrayed themselves at their convention, Democrats must be the saddest human beings on the planet.


They enjoy all the great things that freedom and capitalism can bring, but they're never happy.

Unlike Republicans who look to the future, they're slaves to the past, guilty about America's greatness, clueless about its founding ideals and fixated on its imperfections.

The Democrats proved at their convention they don't have any fresh ideas or policies of their own to make America better. All they can do is repeat, "Get rid of Trump. Get rid of Trump."

It's the only strategy they have, but even with the corrupt liberal media's help it's not going to be enough to make Joe Biden president.