No news is relaxing news 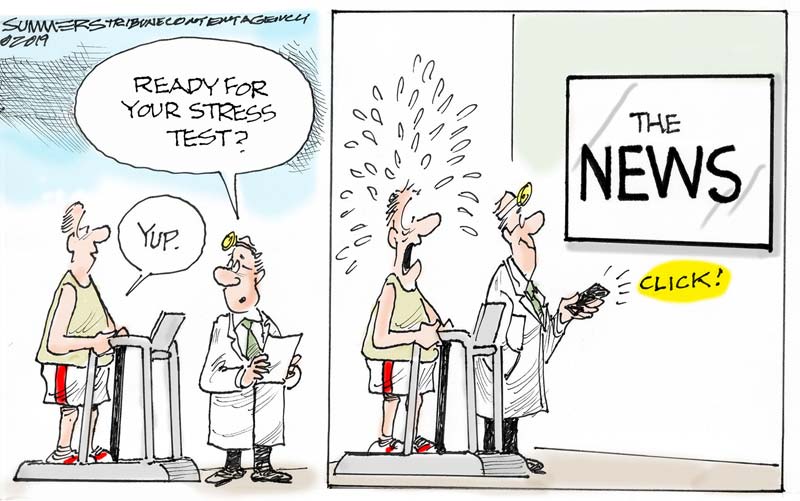 I haven't heard President Trump accused of being responsible for 159,000 COVID-19 deaths since last week.

And I don't even know if Portland was burned to the sidewalks last weekend by its permanent mob of "peaceful protestors."

I'm not in Heaven.

I'm in Newport Beach in a rented house by the sea.

My wife, kids and I are taking boat trips to watch the whales, cooking fancy meals for ourselves and watching the Pacific crash on the beach.

It's called a summer vacation. For me, that means taking a week's vacation from the news.

Since last weekend I haven't been watching Fox or CNN or reading the Washington Post – or even the Wall Street Journal editorial page.

I haven't been doing any TV interviews and haven't even talked on the phone. I'm with my family – relaxing my butt off.

Relaxing is nice. You should try it. You’ll live longer.

I did hear the news about the terrible explosion in Lebanon. But whenever my son Cameron asks me if I had heard about this or that political outrage, I tell him, "No – and don't tell me."

Take it from me, becoming oblivious to the nasty partisan bickering and hatred that fills the airwaves every day makes you a happier person.

At the end of the day, everybody in America goes to bed PO-ed. I haven't gone to bed PO-ed at Nancy Pelosi once all week.

Before I went into my self-imposed news bubble, all I heard on TV was Democrats and Republicans arguing about who was going to steal the presidential election on Nov. 3

Democrats were saying if Trump lost he would refuse to leave the White House and would have to be removed by force.

Trump was saying the Democrats were pushing mass mail-in voting so they could pad the results and make sure Joe Biden wins.

That kind of talk made me realize that on Election Day I'm going to have to get the hell out of Dodge.

No matter who wins, I truly believe there will be major riots in the streets of many major cities, including Los Angeles.

If Biden wins, conservatives and the right will riot.


If Donald Trump is re-elected, the left will go apoplectic. The violent and destructive mobs we've seen in Portland, Seattle, Chicago and other big cities will look like St. Patrick's Day parades.

The thought of what's going to happen in American on the night of Nov. 3 scares the hell out of me.

If the election is actually determined that night, which is a big if, I think there's going to be riots, gunfire and many people killed.

That's how volatile and dangerous I think it has become in the USA.

I live in L.A in the San Fernando Valley and I've decided I'm not going to be home on Nov. 3 and the next few days.

I'm going to vote absentee as I usually do. But in time for Election Day I plan to move to a safe haven for me and family where they don't have to worry.

It won't be here in Newport Beach or on Balboa Island, where I’ve noticed a lot of the largest yachts are proudly flying huge Trump flags.

Our Reagan family haven will be somewhere far out in the boondocks. Maybe Butte, Montana. Or maybe Napa Valley, where I hear they have a lot of good wine that will help us celebrate or dull the pain of Election Night.