The invasion of America is not fake 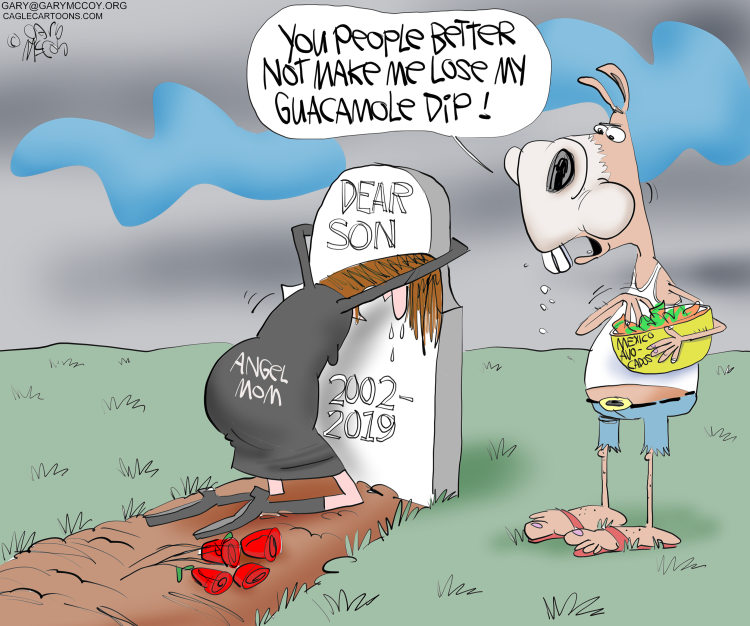 The Democrats running the House of Representatives have gone insane – and they prove it every day.

Despite the conclusions of the Mueller Report, Nancy Pelosi and her Deranged Democrat underlings in the House have not given up their fight to depose President Trump.

They have six kangaroo committees in the House subpoenaing anyone who ever played golf with the president and looking everywhere they can for whatever financial or personal dirt they can find to use against him and his administration.

The Mad House Democrats don’t care what irresponsible charges they make. When it comes to Trump, all’s fair in hate and war.

Meanwhile, while they make fools of themselves and waste time trying to over-ride the Mueller Report, the Deranged Democrats refuse to do a single thing about the invasion of migrants on our southern border.

No Democrat would be caught dead calling it “an invasion.”Neither would any journalist or pundit employed by CNN, MSNBC, the New York Times or the Washington Post.


But when you have thousands and thousands of Central American asylum seekers over-running our border every day and overwhelming our ability to process and properly care for their families, it’s an invasion.

Overcrowding is so bad now at the Texas border that the Border Patrol has had to fly or bus migrant families to processing centers in towns like Santa Fe, Denver, San Diego, San Bernardino and Murrieta, a city of about 100,000 between LA and San Diego.

No one is quite sure where they go after they are processed, but it could be anywhere. And they have little or no money, no food, no place to stay – just a slip of paper telling them to show up at their asylum hearing two years from now.

When will Democrats in Congress wake up and acknowledge this invasion is real? Never. They don’t give a you-know-what.

There’s nothing planned. No Democrat is talking seriously about how to fix our broken immigration system – which hasn’t been addressed for 33 years by either party in Congress.

Democrats pretend the invasion is not happening and the liberal media either pretend along with them or mock the president and Republicans who call it a national emergency.

The mainstream liberal media are especially at fault because they have done such a biased, half-butted job of covering the migrant invasion.

They’ve shown us every misery suffered by the poor migrants after they get to American soil.

And they’ve made sure the whole country knows the details about the separated families and the tragic deaths of six kids in U.S. custody – all of which, of course, are entirely the fault of a man named Trump.

But the mainstream media is shameful.

They have consistently underplayed the scope of the invasion problem, its economic and social costs, its causes (bad immigration laws and a chicken Congress) and ignored its many other victims – the American ones.


The migrant invasion has hurt the overworked border patrol officers, the people and property owners in the towns at the border, American taxpayers and the poorest citizens of the USA whose unskilled jobs are most likely to be taken by migrants.

Now we have cities and towns far from the border becoming the latest victims of Washington’s failure to fix immigration.

It’s their citizens who are going to have to pay for a lot of the food, housing, policing, education and healthcare of the migrants.

The saddest part is that this politically created mess on our border is not going to change.

Congress isn’t going to do anything and it won’t let Trump do anything.

It should be up to the public to clean out the bums in the House and Senate, but voters won’t do anything because though most of them think Congress is a cesspool of incompetent cowards they also think their home congressperson is just great.

Since the invasion of migrants from Central America is not going to stop anytime soon, you might as well go down to your town square or bus station and put up a “Welcome to America” sign.

Just make sure you write it in two languages.