So far, Biden is all gloom and no sunshine 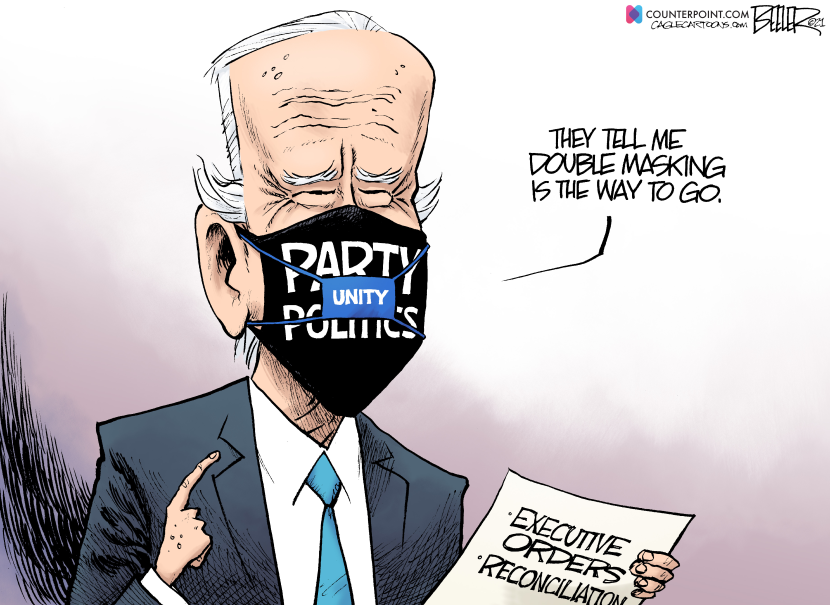 Say what you will about the personal and political failings of Donald Trump, at least he was an optimist.

Along with being a cheerleader for America, he talked positively, sometimes when he shouldn't have, and he could always see the sunshine.

President Biden is the exact opposite.

In a month he has not said anything that has uplifted the spirits of a single American who's not a member of the teachers union.

For Biden and the left-wingers he's been appointing to his Cabinet, there's no such thing as sunshine now or in our future, just pitch darkness and gloom.

They want to kill America's energy independence and keep our school rooms empty of children until the teachers say it's OK.

They want to prolong the strict COVID-19 lockdowns that have already wrecked huge swaths of our economy, wiped out most of the joy in our social lives and ruined the future for our kids and grandkids.

It's really appalling how much damage we've already allowed our federal and state governments to inflict on us in the name of protecting public health.

It's not just closing schools, restaurants, gyms and sports venues or restricting attendance at churches and synagogues.

We've got kids in kindergartens playing in their own 4-by-4-foot plastic cubes, and musicians in student orchestras practicing their instruments inside their own little green tents.

How can anyone with a gram of common sense see idiotic things like this and not conclude that the country has gone insane? No wonder suicides and drug ODs have spiked.

I'm especially surprised people in their 60s and 70s aren't killing themselves by the thousands each day.

Until the pandemic arrived, for many aging Boomers traveling was their only fun.

After decades of hard work and saving, they looked forward each year to flying to Europe or going on cruise ships for two weeks, two months, even an entire year.

As my wife the travel agent can tell you, the cruise industry has been sunk by the war on Covid.

The CDC has made it virtually impossible for cruise companies to adapt their ships to its strict and constantly changing rules.

Meanwhile, in Washington, President Biden and Dr. Fauci continue to give us no good news and nothing to look forward to.

The rapid development and production of a vaccine for CVOID-19 – an absolute miracle – and the recent sharp drop in cases and deaths should be daily cause for joy and optimism.

Yet Biden and Fauci keep moving the goal posts back.


Now they tell us the vaccine won't be enough to allow us to return to what life was like BC – Before COVID.

Fauci has basically said you can get 40 vaccine shots and wear 13 masks and you still should not visit your grandkids or you might die.

The president – our pessimist in chief – went on a CNN town hall and said we might be back to normal by Christmas.

Normal? Come on, man! America's never going back to what it was before it became the Land of Lockdowns.

Too many businesses have died. Too many workers have lost their jobs. Too many public health rules and mandates have been issued.

Plus, the Democrats in charge of blue states and cities are never going to let "normal" return. They love the new powers that the war against COVID-19 has given them too much.

So, is there any good news from the Biden administration? A little ray of sunshine in the gloom?

I think I might have seen some this morning. A bunch of Democrats in Congress reportedly sent a letter to the president wanting him to give up sole authority over the nuclear codes.

That scared the heck out of me. I don't know if it was the letter that scared me or the fact that some Democrats don't think the president has the cognitive ability to be trusted with the codes.

Either way, the big question is, what do those Democrats know – and is it good news or bad news?