Impeaching Trump again was almost as dumb as closing schools 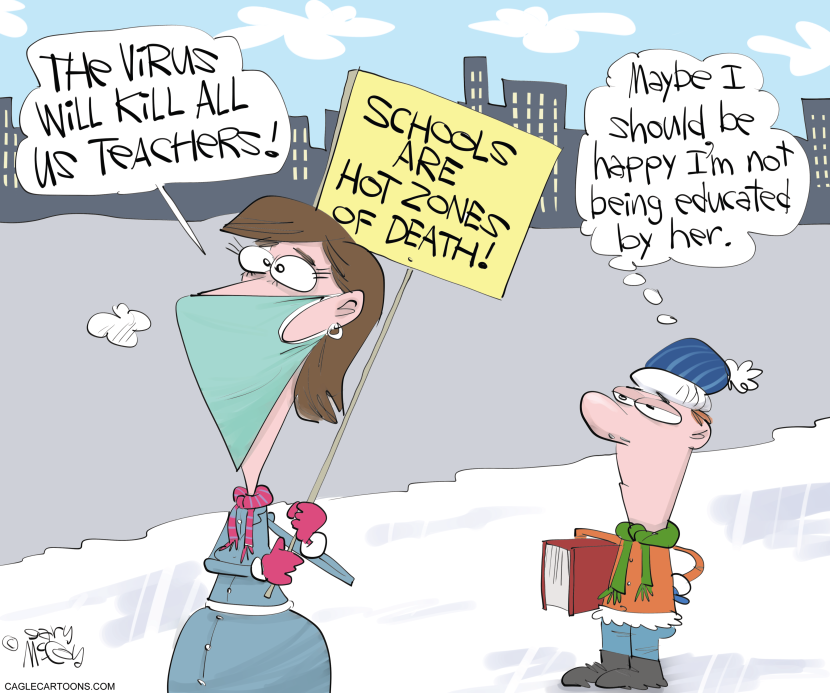 It's not often that you can watch a major event playing out on the national stage and predict with certainty how it will end, but this week I have two.

The first is "The Impeachment of Donald Trump, Part 2."

Like all sequels, it's much worse than the original melodrama – which is really saying something.

But the ending of the Democrats’ second impeachment show trial – if it's not over already – is as predictable as a Disney movie.

Everyone knows – even the most dishonest journalists in the liberal media – there's no chance that our ex-president is going to be convicted by the Senate.

Everyone knows – even the always Constitutionally challenged Democrats – that it's an unconstitutional waste of time to impeach a president who is, um, no longer president.

Everyone also knows it's cheap political theater to charge Trump with inciting an insurrection at the Capitol on Jan. 6. Only CNN thinks "Trump Impeachment Trial, the Sequel" is prime-time news.

Did Donald Trump say and do a lot of dumb and wrong things? Absolutely.

But you can say that about a lot of politicians in both parties in Congress.

In fact, if you used Trump's alleged "high crimes and misdemeanors" as the standard for impeaching a politician, there'd be no one left in Washington. They'd all be in jail.

So it's safe to say in advance that Trump’s second impeachment will close with a whimper and the ex-president will go on his merry way.

The other outcome that's entirely predictable this week is the bad things that will happen to our children if we don't immediately open all of our public schools to in-class learning.

Unfortunately for the country, however, when it comes to reopening schools Democrats have played partisan politics for a year.

It was part of their strategy in 2020 to do everything they could to hurt President Trump politically, which is why Blue State governors and mayors foolishly kept schools closed even after most other countries re-opened them.

Now we have a new president who says he wants to open half of all schools by March 1- but for one day a week, not five, which is totally stupid.

In case you haven’t noticed, Democrats have been total hypocrites on the issue of school reopening.

When it comes to wearing masks, limiting the size of weddings and deciding who gets first dibs on the COVID-19 vaccine, they always like to say they're just "following the science."

That's total BS, as any locked-down citizen of Gavin Newsom's California can tell you.

But the only science Democrats have been consistently following on schools is science fiction.

They've actually been following the demands of the teacher unions, not the science that says opening schools would pose virtually no danger to the health of kids or teachers.

It's the teachers that have fought the hardest to keep the schools closed. And Democrats will do whatever the teacher unions want, because that's where so much of their political contributions and power comes from.

My two grandkids go to Catholic preschool and my daughter teaches at a Catholic grade school, where they've had a mix of Zoom classes and in-school learning for months.

But I feel really sorry for the Black and brown kids trapped in America’s failing inner-city public schools.

Their schools may be terrible, but they're the kids being hurt the most by keeping schools closed.


They're the ones whose poor and working-class parents can't provide them with laptops, tutors or private schooling.

Three fourths of Black and Latino students in this country were unable to read or do math at their grade level – and that was before schools were closed last year.

Now our poorest kids – and middle-class kids too – have lost an entire year of learning and still the Democrats are kowtowing to the teacher unions by dragging out the process of reopening schools.

It's not hard for me to predict what will happen if our schools are not opened immediately for five days a week: even more of our most-at-risk kids will be leaving school not with a diploma, but with a Glock.