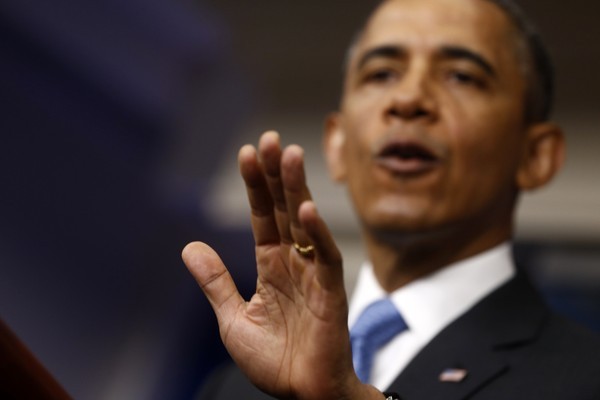 Do President Obama's adamant denials that he misled the American public on various important aspects of Obamacare stand up to scrutiny? No, and it's not even a close call.

In the past several weeks, there's been a major uproar in the alternative media — the liberal media doing their usual best to cover up stories damaging to this administration and the cause of progressivism — over recordings that have surfaced of MIT economist Jonathan Gruber. Gruber essentially admitted that the administration duped the American people, whom he called "stupid," on certain issues and the Congressional Budget Office as to the cost of the legislation.

For a while, the administration and its media lapdogs just ignored the recordings and their damning implications, but that changed Sunday, when "Meet the Press" host Chuck Todd challenged Health and Human Services Secretary Sylvia Burwell on the matter and Obama broke his silence to issue an insulting denial of Gruber's claims.

Todd told Burwell: "He's playing into every fear that many conservatives had about this bill — that it's not transparent, that there are things in it that people don't know. This certainly can't help a credibility gap."

Burwell adamantly insisted that she "fundamentally" disagrees with Gruber's "comments about the bill and about the American people." She couldn't deny that Gruber made his comments, of course, because they were recorded for all to see.

But Obama, during a news conference at the G-20 summit in Australia, did the next best thing, from the administration's standpoint. He told Fox News' Ed Henry, "I just heard about this."

Apparently, Obama doesn't even keep up with the news well enough to realize that his similar past statements that he just learned of this or that important news item when he read it in the paper that morning have been ruthlessly parodied. No one believes he is that ignorant on matters on which he would have firsthand knowledge well before any news outlet. The only plausible alternative scenario is that he is so disengaged that he doesn't keep up with critical information on vital issues — and that's even worse.

As usual, Obama exhibited no contrition and copped his signature attitude of indignation at the suggestion that the administration has anything to apologize over concerning Gruber's revelations.

Obama said, "The fact that some adviser who never worked on our staff expressed an opinion that I completely disagree with in terms of the voters is no reflection on the actual process that was run."

"Some adviser"? That's reminiscent of Obama's flippant description of his friend William Ayers, a domestic terrorist, as "just some guy in the neighborhood." But what do the facts show?

Well, Gruber didn't just boast that "this bill was written in a tortured way to make sure (the Congressional Budget Office) did not score the mandate as taxes." In a separate video, he admitted that the "Cadillac tax" — a tax that applies to expensive health care plans, is "a very clever, you know, basic exploitation of the lack of economic understanding of the American voter." There is also a third video in which Gruber denigrates the American voter.

Though he wasn't technically on Obama's staff, did his statements nevertheless represent the administration's attitude and approach? This, too, cannot be in serious question. In my books and columns, I've detailed the double counting and other gimmicks — from the "doc fix" to the "Cadillac tax" to tricks with Medicare — that Obama employed to get the bill passed.

But Obama's casual dismissal of Gruber and his effort to dissociate his administration from Gruber's admissions don't wash. The Daily Caller reports that in an interview with PBS in 2012, Gruber said he had discussed the Cadillac tax with Obama at the White House.

In that interview, Gruber said: "(Obama is) really a realistic guy. He's like, 'Look, I can't just do this.' He said, 'It's just not going to happen politically. The bill will not pass. How do we manage to get there through phases and other things?' And we talked about it. And he was just very interested in that topic."

Gruber's characterization of Obama is entirely believable, considering not only Obama's deceptive schemes to get the bill passed but his own remarks on a 2007 video. On that recording, he admitted that he favored a single-payer system but acknowledged that patience would be required because it could take as long as 15 years.

There are also the minor inconvenient facts that Gruber was paid $392,600 to consult on Obamacare and that, as Slate's John Dickerson has reported, Obama prominently acknowledged Gruber's role in helping craft the law. Further evidence includes this statement by Neera Tanden, who is now the president of the Center for American Progress: "I remember many a call to Jonathan Gruber" concerning the formulation of Obamacare.

The bottom line is that Gruber was a trusted adviser who shared and served the administration's goal of passing Obamacare at any cost, including with smoke and mirrors and outright lies to the American people.

President Obama's denials are not only contrary to the undisputed facts but also part of an undeniable pattern he has established of deceiving the people to serve his policy ends.

As I believe the midterm elections showed, the majority of Americans no longer trust this man. Finally.