Could the Sleeping Giant Be Awakening? 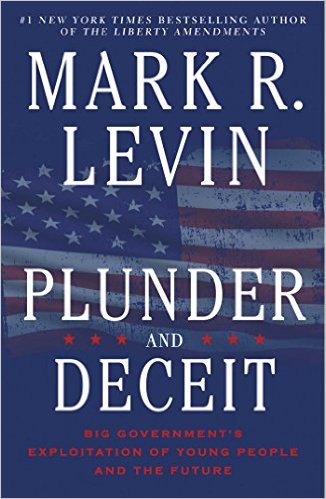 Can we simultaneously love our children and betray their generation and generations unborn?

Do I have your attention? I hope so, but I can't take credit for that lead. I stole it from Page 1 of Mark Levin's new book, "Plunder and Deceit: Big Government's Exploitation of Young People and the Future."

Conservatives have long decried the left's feigned concern "for the children" while it pursues an agenda that is wrecking their future, from Social Security and other budget-busting entitlements to the undermining of our national security. But no one has devoted a book to turning this meme on its head and cogently proving the statists guilty of that which they falsely accuse others.

There's a big difference between the left's invoking "the children" and Levin's doing so, for leftists only do it to obscure policy issues they can't argue on the merits. Levin mentions the children not to divert you from logical thinking but to coax you into it.

Universally, parents strive to give their children better opportunities than they had. Today, however, the situation is — shockingly — reversed. The current generation, at the behest of the statist political class and its enablers, is living on the backs of its children in the cynical name of safeguarding their interests. Those in this generation are mortgaging their children's future to make their own lives more comfortable.

Statist defenders of the status quo will protest that these are outrageous charges and that they are trying to improve everyone's life, including those in the rising generation. But the stubborn facts belie their claims. When anyone brings up these subjects, they either change the channel or start their familiar fearmongering and scapegoating — anything to avoid a fair examination of the issues.

Levin's book is precisely what the nation needs to force a public discussion of these issues and to keep statists' hands off the remote. Levin is uniquely suited to call our attention to the horrifying facts because 1) he makes the complex understandable; 2) people read his books; 3) he meticulously documents every position he takes; 4) he understands statists' motivations; 5) he has the credibility to sound another national warning; 6) no matter how dire our circumstances appear, he refuses to accept defeat; and 7) unlike so many other critics, he offers concrete, practical and realistic solutions.

Anyone remotely attuned to current events knows that the United States is racing toward Greek-level insolvency. He knows our national debt exceeds $18 trillion. But does he know this figure is vastly understated, as Levin demonstrates? Does he realize that our government's unfunded liabilities are about $100 trillion and that if we don't make structural adjustments to our smorgasbord of "entitlement" programs, they will consume 100 percent of tax revenues by 2039 — conservatively estimated?

Everyone should know these things, yet people seem to assume there's no need for panic because our ruling class isn't concerned. Every time any conservative warns of this inevitable fiscal Armageddon, the statists and their media henchmen set out to destroy him as an evil Scrooge hellbent on hoarding all the wealth for "the rich."

Imagine if the political left in this country expended one-fourth the energy calling the public's attention to the looming fiscal crisis, which actually threatens our kids' future, as it does in hyping "global warming," which doesn't. We could turn things around within a generation — provided we were willing to make modest sacrifices, which truly would be for the children.

Dream on. Leftists are not about to join us and will continue to slander everyone who sounds the alarm. That's why Levin's book is so necessary and so timely.

I have long understood that Social Security and Medicare are upside-down, but after reading Levin's book, I know exactly why. I now have all the facts and figures at my fingertips, unpleasant as they are. Levin deals with one devastating issue per chapter: the debt, Social Security, education, immigration, the environment, the minimum wage, national security and the Constitution. He documents how the statists are destroying this nation — and our children's future — in all these categories.

I admit that Mark Levin is my good friend, but it honestly amazes me how, in a relatively short book, he can present power-packed information on all these critical issues as thoroughly as the densest textbook yet in a style as readable and riveting as any best-selling novel.

This book is a one-stop shop on the vital issues that our generation must address. As Levin points out, ultimately these are more than economic and national security issues. They are moral issues. We have a moral obligation to place these matters on the front burner, no matter how deceptively distant they may seem to us now and regardless of what kind of heat we take.

Don't give the statists the benefit of the doubt, for they have to know what they are doing. The numbers do not lie, and Levin provides all the numbers in this book. This is purely a matter of plunder by deceit.

Despite how ominous all this sounds, we can make the necessary changes to turn this ship around. G0D bless Mark Levin for once again warning the nation and providing us a way out of this nightmare.