Dems Just Won't Give up Their Impeachment Bone 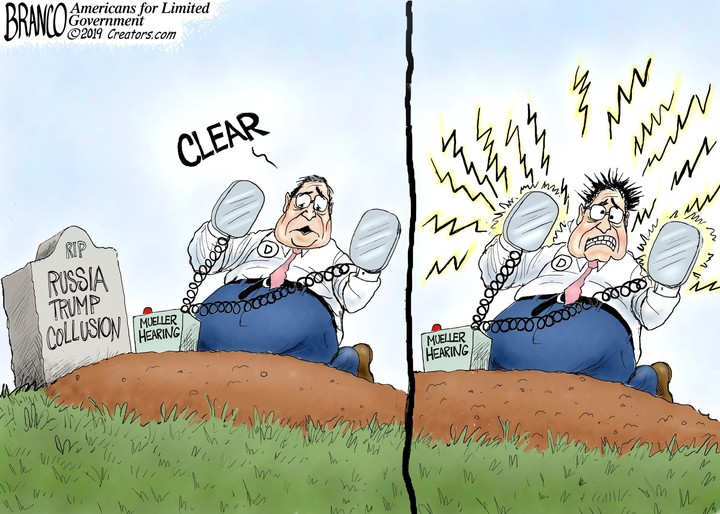 Many war-torn Democrats and their media cohorts are in mourning over special counsel Robert Mueller's stunningly bad performance before Congress, and it is a wonderful thing to behold.

Take, for example, MSNBC host Joe Scarborough, who, upon watching Republicans take Mueller apart in cross-examination, asked God for forgiveness for ever having been a Republican.

So Joe, do you mean to say you are ashamed for having associated with Republicans because they asked tough questions of the man who diverted the nation's attention for two years with a partisan hoax of gargantuan proportions? You are more comfortable lying in bed with mean-spirited Democrats, progressives, liberals and leftists who delight every day in savaging President Trump and his supporters. We understand that you are sorry you were ever a Republican, and we're sorry, too, but could you please come up with a better reason — one that might convince more than a sliver of credulous people?

MSNBC proudly tweeted a video clip of Mourning Joe ranting against Democrats for failing to fight back against President Trump. The written portion of the tweet reads, "If you want to stop Donald Trump, it is time to ... roll up your sleeves and go after him and do whatever it takes to win. If you don't do that, you'll have (him) for four more years."

Well, Joe, you outdid yourself on this. With such trenchant analysis, one wonders whether MSNBC is lamenting that it ever hired you. Well, not really. You fit in perfectly there, as evidenced by the nodding heads of your co-host and guests as you were spewing forth your inanity.

In the video clip, GI Joe boasts that if he had been one of the other 16 GOP presidential candidates who Trump insulted during the primary campaign, Trump would never have been elected because he would have made it his singular mission to destroy Trump. Quite the tough guy.

Sorry, Joe, but you think you can sit there perched in your host seat and convince us that you could have done what no other Trump opponent could do? Granted, some of them lacked energy, but others brought their A-game and fought Trump toe-to-toe and still came up short. This is not to discredit Trump's opponents, but it is to say that Smoking Joe is inhaling if he thinks he — an obviously inauthentic Republican from the jump — could have been more successful.

But the larger point is not about Scarborough's faux machismo. It is about his obvious blindness to reality. Not only did his Republican competitors give it their best shot but Democrats have also been attacking Trump relentlessly for years now. That's all they've done, to the point of abandoning any semblance of a policy agenda. To call them one-trick ponies is an insult to small horses.

Scarborough is simply throwing a tantrum — in total frustration that his now beloved Democrats are powerless to change the results of the 2016 presidential election after three years of trying. Like his fellow Democrats, Scarborough doesn't understand that you can't beat Trump on his own turf — the octagon. He is a UFC warrior, and they are barking Chihuahuas, as I've said before. It's not just that Trump fights back; he does so more effectively than any other Republican leader since Ronald Reagan.

More and more Americans are coming to understand that Democrats have no constructive policy ideas, or if they do, they don't respect voters enough to share them. Especially considering the president's remarkably successful record to date, it is amazing that Democrats think riding the Trump-hatred train is all they need to regain power.

But that is indeed what we're learning. Despite Republicans' interception of Democrats' Hail Mary pass to Robert Mueller, Democrats, like scentless hound dogs, are even more determined to pursue impeachment against Trump based on their false allegations that he stole an election they've been trying to steal for three years. They are possessed and seem to have no prospects of liberating themselves from the bonds of their self-inflicted poison.

In the meantime, President Trump will continue to pursue pro-growth, pro-life and pro-liberty policies, and those that will protect our borders and promote America's interests on the national stage. People are starting to pay attention, as the polls show. 2020 is looking better all the time.