Pelosi vs. AOC: It's a Beautiful Thing 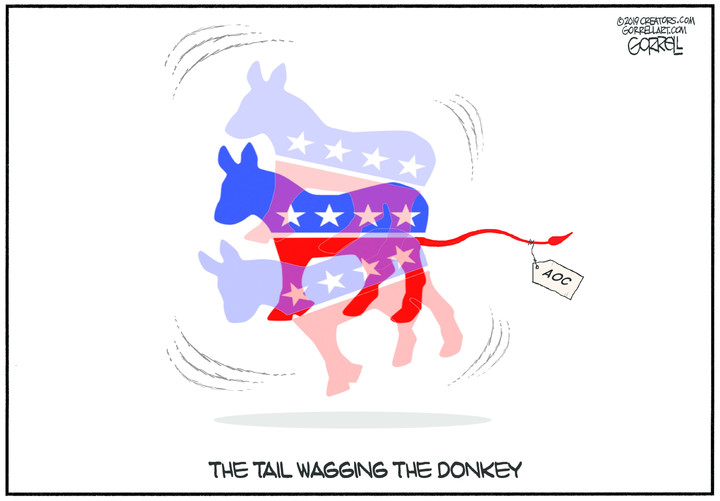 I've often wondered whether the internal contradictions of leftist ideology would eventually cause leftists to turn on one another. Perhaps we're catching a glimpse of that in the feud between Nancy Pelosi and the Alexandria Ocasio-Cortez quartet.


Everything about modern leftist ideology is extreme. It is extreme in substance, and its practitioners are self-absorbed, sanctimonious, uncompromising and often irrational. Intersectionality zealots are disciplining white feminists for their selfish advocacy. Biological males are dominating female athletic events courtesy of the transgender movement. Leftists of color and female gender are dissing old white men despite the men's long records of dedication to the sacred cause of progressivism. Some women of color are being told they are not black enough to lead the cause. And what about poor PETA? Where does that hapless group fit into this kaleidoscope of insanity these days?

After Speaker Pelosi led Congress in passing a border-funding bill over the opposition of Reps. Alexandria Ocasio-Cortez, Ilhan Omar, Rashida Tlaib and Ayanna Pressley, Pelosi discussed the bill with The New York Times. "All these people have their public whatever and their Twitter world," she said, referring to the leftist upstarts. "But they didn't have any following. They're four people and that's how many votes they got."

Uh-oh! That wasn't very nice — especially not for a nice liberal.

AOC is not known for her humility or obedience, and she did not take that slight sitting down. "When these comments first started, I kind of thought that she was keeping the progressive flank at more of an arm's distance in order to protect more moderate members, which I understood," AOC said. "But the persistent singling out ... it got to a point where it was just outright disrespectful ... the explicit singling out of newly elected women of color."

There you go. To invoke a very cliched cliché, "Live by the sword. Die by the sword." Not to defend the indefensible AOC, but I wonder how Pelosi feels getting some of that race baiting thrown back in her face? You will recall that not long ago, she despicably said that President Trump wanted to "make America white again." To paraphrase Doc Holliday in "Tombstone," "Why, Nancy, what an ugly thing to say. I abhor ugliness."

But seriously, AOC? Or, to put it more in your vernacular: Are you being serious right now? How dare you accuse the Snow White-ish progressive icon Nancy Pelosi of racism?

Nancy is getting a taste of her own medicine here. If she were capable of learning a lesson, this is what it would be: The leftist ideologies of intersectionality, critical race theory, whiteness studies and miscellaneous other faculty-lounge thought experiments will tell you that you — a white lady — no matter how dedicated you've been to the cause, are not capable of adequately representing it because your whiteness, and even female gender, don't afford you the requisite life experience to fully get it.

Nancy, and so many progressives, use racial smears against conservatives to neuter them — not because they believe they're racists. They know better. It's simply a cynical power play, and it always has been.

While it is delicious to see this tactic thrown back in Pelosi's laughing face by one with stronger intersectionality credentials, let us not allow ourselves the luxury of sanguinity over this blissful moment. In the long run, it won't matter much in the scheme of things.


Don't be fooled. This is not really a battle over ideology. Nancy Pelosi and the establishment wing of the Democratic Party are not — let me repeat, they are not — moderates. These people all embrace varying degrees of an extreme progressive agenda including radical environmentalism; socialized medicine; socialism writ large, evisceration of gun rights; abortion on demand; health care and welfare for illegal immigrants; open borders; confiscatory personal- and corporate-income tax hikes; softness on Iran and terrorism; leftist judicial activism; wholesale end runs around the Constitution to secure their power, such as abolishing the Electoral College and allowing 16-year-olds and felons to vote; and so much more.

Yes, AOC's Four Horsemen of the Apocaleft are more radical, but if left to their own menacing devices, Pelosi and Co. are plenty radical enough to complete Obama's scheme to fundamentally transform the nation. The significant difference between the two groups is that Pelosi's has enough sense and savvy to pretend to be more moderate to make itself more electable. AOC et al. are just too idealistic (though it pains me to associate their toxic views with any sort of idealism) to rein themselves in, even for pragmatic purposes.

What we're seeing is simply a turf battle for control of the party. It's about power. Yes, Pelosi is the alpha, but AOC, despite her reliable buffoonery, is a force to be reckoned with, if for no other reason than she represents the future of her insane party. She is the product of decades of cultural indoctrination, and she is but one of millions of young radical leftists eager to accelerate the end of America as founded. Pelosi is fighting back because she has to, but in the end, they will have to make peace, or at least pretend to, going into the election season.