Thumbs Down for Justice Roberts 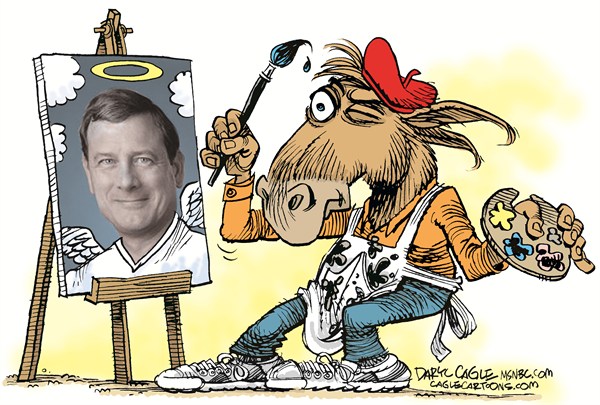 I couldn't be more opposed to socialized medicine, which I believe is the endgame of Obamacare, and I am opposed to the societal sanctioning of same-sex marriage, but those are not my greatest concerns with these two rulings.

In both cases, the court flouted the Constitution, the rule of law, the English language and the truth itself. People who appreciate the unique American system of government and those who value truth itself should be very concerned.

First, let's briefly consider the Obamacare ruling. Though I was beginning to believe it was possible that the court would do the right thing in this case, I didn't allow myself to count on it mainly because of the endless insanity we've witnessed over the past six years.

Mindful of the absurd lengths Justice Roberts went to in upholding Obamacare initially — the verbal contortions he disgracefully engaged in to save this wretched law — why would I assume he would do otherwise with his second bite of the apple? There was a small part of me that was hoping he realized just how severely he had sold his soul on the first decision and would be looking for redemption. But that was always a long shot.

In the first case, he redefined taxes and penalties to justify a result he'd already reached in his mind irrespective of the law, flagrantly breaching his fiduciary duty to the Constitution. We hear that he descended into this sophistry because he believed he had some higher calling to preserve the image of the court.

Of all people, he should know that in deciding cases his duty is not to preserve the image of the court, except perhaps indirectly, but to objectively evaluate the law and facts and honor the integrity of our Constitution. It was wholly improper for him to disregard the plain meaning of the statute in order to save Obamacare because he might have believed that invalidating the law would be disruptive to society and damaging to the image of the court.

For Roberts to have done so was a high-handed act of self-serving cowardice, and he needs to be called out on it. It was immoral for him to presume to attempt to save the court by fundamentally violating its operating principles. It is ironic that in the process of trying to save the court's image he deeply wounded it.

The same exact criticisms apply to last week's decision in equal measure. No intellectually honest person believes the law was remotely ambiguous concerning Obamacare subsidies, and he literally rewrote the law to justify saving it again. Then he had the unmitigated audacity to write a dissenting opinion in the same-sex marriage case decrying, in eloquent and explicit terms, the very sin of judicial legislation he committed twice in the Obamacare cases.

Yes, I am strongly opposed to Obamacare as a policy matter, but I am far more upset about the court majority's undermining of the Constitution, the English language, the laws of logic and truth itself than that socialized medicine is one step closer to achieving permanency in the United States.

One of the main things that makes America unique is its Constitution, which was purposefully crafted to establish a system of government most likely to safeguard our liberties. When the court arrogates to itself the power to rewrite the Constitution, and statutes enacted by a popularly elected Congress, it dismantles the very foundation of the system that protects our liberty.

While Roberts is patting himself on the back for supposedly protecting the image of the court, he is obliterating the integrity of the Constitution, our system of checks and balances, our sacred liberties and the stability of society, because when you rule that words mean the exact opposite of what they actually mean, you are injecting intellectual and moral chaos.

If we can't rely on the Supreme Court to honor the plain meaning of the Constitution and of popularly enacted legislation, then our liberties are on shifting sands. No matter how unique our Constitution is, it is worth no more than toilet paper if its words can be twisted to achieve any result the justices prefer.

I make no apologies for being outraged at these decisions, and I pull no punches in directing my ire at so-called conservative justices who are a part of such disgracefulness. I won't waste my breath criticizing liberal justices in such cases, because everyone knows they believe they have a right to rewrite the Constitution at will, as long as it is in furtherance of the liberal agenda. But conservatives — constitutionalists — hold themselves out as honoring the original meaning of the Constitution. For them, there is no excuse.

Roberts obviously regards himself as one who takes seriously the integrity of the Constitution and the plain meaning of statutes, as his opinion in the same-sex marriage case makes clear. This renders him all the more culpable for his Burwell decision. No matter how much he may rationalize and engage in self-deception, he has constitutional blood on his hands.