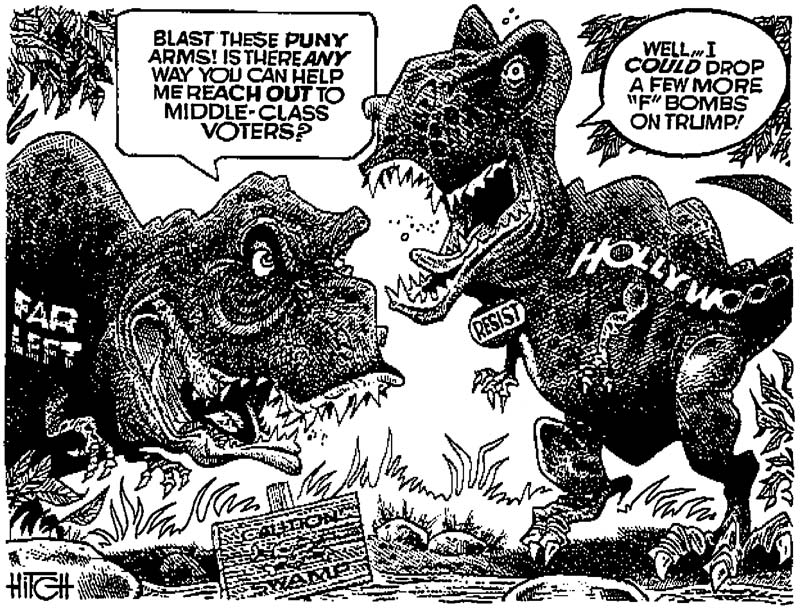 Witnessing the political left's increasing irrationality and aggressiveness is, in the obvious sense, discouraging, but on the bright side, it's immensely clarifying.

People with selective memories may be unaware, but the left's extremism and fascism are nothing new. Donald Trump is not the root cause of its angst, nor is he the first Republican president on the receiving end of such unhinged hatred.

Never forget the Democrats' character assassination of such honorable judicial appointees as Robert Bork and Clarence Thomas. Go back and watch some of Ted Kennedy's (and Joe Biden's) outrageous speeches condemning such nominees.

Concerning the left's attitude toward GOP presidents, let's not begin with Richard Nixon, because given his Watergate-related behavior, few will remember or acknowledge the left's preceding viciousness toward him. But how can anyone forget the epithets and derision routinely hurled at President Reagan — that "amiable dunce" and warmongering cowboy who was determined to provoke nuclear war with the Soviet Union? Instead of giving Reagan a deserved Nobel Peace Prize for his dominant role in bringing down that evil empire, liberals chose instead to idolize and credit Soviet leader Mikhail Gorbachev, endlessly slobbering over his unfolding of glasnost and perestroika. To hear liberals tell the tale, if it weren't for Reagan, the benevolent Gorby would have torn down that wall years before.

But that was then, and this is now, you might say. Fine. Then how about we fast-forward to the presidency of George W. Bush? Lest we forget, it was Democrats who corrupted the 2000 election process with hanging chads and bespectacled election thieves, attempting election larceny right before our eyes. When the Supreme Court shut down their chicanery, projecting Democrats lost their collective mind, screaming that the Republicans had stolen the election from popular vote winner and certifiable environmental lunatic Al Gore. Please don't forget just how bad things were for Democrats — many of whom sought grief counseling and threatened to leave the country. Suffice it to say, they were fire-breathing mad. The liberal media's orchestrated propaganda campaign worked to convince rank-and-file Democrats and assorted leftists that George and Jeb Bush conspired to purloin the Florida election — almost with the same sophistication that Trump employed in "colluding" with Russians.

Fast-forward again to the Democrats' support of the Iraq War resolution when it was politically necessary and their about-face when it became expedient to oppose it. But their reversal wasn't just prospective; they straight-facedly proclaimed that the man they'd dubbed a simpleton — George W. Bush — had duped them into voting for the resolution. Duped by a dope? You'd think that would have been laughable on its face. Bush must have been pretty good, because he also had to have persuaded all of our major intelligence agencies and those of our allies to believe that Saddam Hussein had weapons of mass destruction. Never would these sagacious Democratic leaders have voted to attack Iraq had they not been deceived. And so they began their chant, "Bush lied; people died." Pretty soon, they not only had every Democrat in America buying into their fraud but also began to believe it themselves. Liberals are nothing if not consummate history revisionists. From this time forward, the Democrats grew wilder with outrage and indignation. Republicans were simply evil personified, and they had to be stopped — at all costs.

Even Obama's two presidential terms didn't quell the left's ever-growing instability — though liberals were able to channel some of it into abuses of executive power during that time. But the election of Trump sparked a new level of leftist antipathy and psychosis. The liberal media even quit pretending to be unbiased and just became overt propaganda factories for the Democratic Party and against Trump. And it has gotten worse with each passing day. The leftist, liberal media and Democratic Party establishment are utterly beside themselves today with Trump derangement syndrome, and it grows exponentially with each Trump policy success and each Democratic setback in liberals' Sisyphean effort to impeach Trump.

Now we are seeing almost daily violence or threats of violence from these characters, who are openly, even proudly, displaying their fascism for the world to see. Recent examples, from Trump officials being driven from public restaurants to a Democratic congresswoman calling for violence against Trump officials, are too numerous to deny that there is a pattern. The left's inability to conceal its hatred and fascism is a glorious collateral benefit of Trump's electoral and policy victories. Thank the Lord that a majority of the American people still remain uncomfortable with such behavior, which means that Democrats are seriously damaging themselves.


The recent Supreme Court decisions on Trump's travel ban, public unions and a California law requiring pro-lifers to push abortion have sent the left into hysteria. Justice Anthony Kennedy's announced retirement will force many more into therapy. The Democratic Party has been leftist for some time, but leftist extremists are now the mainstream of the party — and the victory of young socialist Alexandria Ocasio-Cortez in New York against incumbent Democratic Rep. Joe Crowley is but one illustration.

For years, Democrats really haven't had an answer to successful conservative policies, so they've been increasingly reduced to identity politics. Their essential message is that many of Trump's policies may be working, but he and his supporters are racists, sexists and homophobes. Their shtick is growing tired, and people, including some minorities, are getting wise to it.

It would be nice if the left would quit acting out in some kind of uncontrolled rage, but don't hold your breath. If it must be, it must be, but let's just be grateful liberals are showing us who they are and exhibiting their version of "tolerance" and "compassion." The more they keep it up the less likely we'll see a blue wave — and the likelier we'll see a red one — in November.