'Fake News' Is Not a Fake Term 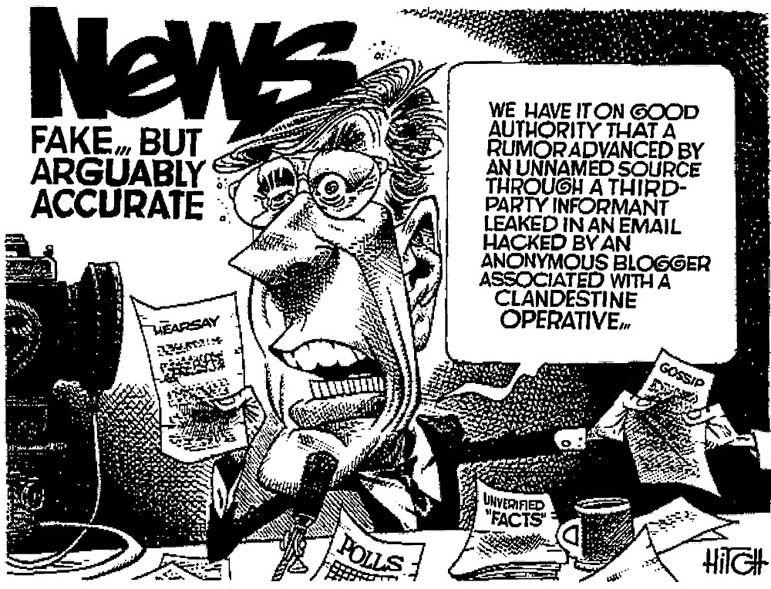 The left and Trump-opposing right are predictably annoyed at President Trump's persistent description of the liberal media as "fake news." Like it or not, the term as he uses it has merit.

Trump's opponents hysterically claim he threatens the free press when he uses that term to describe them, just as they accuse him of other alleged abuses of constitutional power. In fact, unlike President Obama, Trump has governed within his constitutional authority. If his rhetoric scares them, then maybe they should find a safe space.

Before you accuse me of your favorite discussion stopper, "whataboutism" — supposed efforts to excuse Trump's alleged misbehavior by citing equal or worse behavior from Obama, Hillary Clinton or other Democrats — let me repeat: I am arguing that Trump has not abused his executive powers, so I'm not seeking to excuse him at all.

As I've said before in response to Trump critics, not every criticism of Clinton and Obama is designed to take the heat off Trump. It is important to hold Democrats accountable, even for their past actions, and to showcase their hypocrisy.

I have often detailed President Obama's misdeeds and the liberal media's deliberate refusal to report on these and therefore won't provide another comprehensive list here. But it is important for us all to understand that Democrats, as a rule, don't much care about abuses of constitutional power — by the executive branch or by the legislative and judicial branches, not to mention the unaccountable administrative state — when they advance their leftist agenda.

Before you scoff at this, there's a logical reason for this beyond their hyper-partisanship. They don't care as much as we do about the Constitution — at least not as originally written. It's undeniable from their history of supporting liberal judicial activism alone, wherein liberal judges bend, amend and upend constitutional provisions and principles when it suits their policy preferences. Liberals speciously accuse conservatives of activism when our constitutionalist judges merely reverse their lawless rulings, just as they accuse President Trump of abusing his executive authority when he dips his executive pen into White House ink to lawfully repeal Obama's unlawful orders.

As just one example, President Obama repeatedly and publicly lamented his lack of executive authority to change immigration laws when he was trying to pressure Congress to pass the DREAM Act. But when his efforts failed, he dipped his executive pen into his executive ink and grossly abused his authority to advance his cause. And he did these types of things routinely — thwarting the will of the people by usurping the authority of Congress.

The liberal media, who hold themselves out as objective journalists, rarely, if ever, criticized Obama for such lawlessness. They are advocacy commentators disguised as journalists, and reporting on these abuses didn't serve their agenda. Seems pretty fake to many of us. Yes, many commentators on the right are biased, as well, but they usually admit their biases rather than masquerade as objective observers.

Those who insist Trump is abusing his executive authority are the same ones who are hot and bothered about his "fake news" moniker for the liberal press, arguing that it somehow threatens the First Amendment. This is nonsense.

Trump doesn't jeopardize anyone's free speech rights by calling them fake. At the risk — again — of whataboutism charges, Presidents Obama and Bill Clinton were often in public fights with Fox News and conservative talk radio. Did they threaten free speech in such instances? Moreover, are critics suggesting that Trump has a constitutional or moral duty to remain silent in the face of endless criticism from the media — the media that are so preoccupied with discrediting him and undermining his agenda that they spend almost all their time on scandal-mongering and almost none on reporting substantive news?


The critics' incessant and unsubstantiated claim that Trump is a threat to the Constitution is itself irresponsible. Most of the examples they cite have to do with his tough rhetoric rather than his actions. They just can't stand him and have an irrational fear that he's going to end the world, maybe even the universe.

So please, the next time someone casually asserts that Trump is a danger to the Constitution, have the person specify and connect the dots between Trump's action or statement and an actual threat to our democracy.

And when you are considering Trump's claim that he's being attacked by fake news, keep in mind that the leftist media 1) aren't honest about their biases and mask their editorial opinions as news; 2) grossly underreport substantive newsworthy events; 3) make things up about Trump — such as that first lady Melania Trump may have been in hiding to conceal evidence of physical abuse administered by this most evil of chief executives; and 4) deliberately conceal or deny indisputable evidence of Democratic abuses and corruption, the latest being the Obama administration's clandestine assistance to Iran to facilitate its circumvention of financial sanctions — and its overt lies to the American people about it.

When it comes to political reporting, the liberal media are often fake news, so don't just assume that Trump's repeated claim to that effect is nothing but counterpunching noise. It's about time someone called them on it. It's wholly proper for the press to hold public officials accountable when necessary, but there's nothing whatsoever wrong about a president's holding the media accountable, as well. After all, collectively, their bully pulpit is arguably bigger than his.