If You Believe Pelosi and Schumer, I Want to Sell You a Bridge 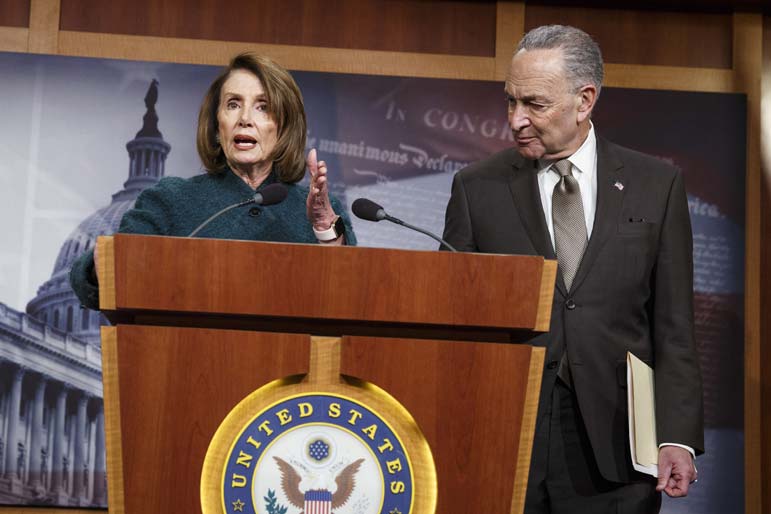 House Speaker Nancy Pelosi says she's praying for the president. Well, so am I, the difference being that I really am, whereas she's cynically pretending to, to show her mock concern over his mental state.

Pelosi, Senate Minority Leader Chuck Schumer and the rest of the congressional Democratic cabal have treated President Trump abominably, and it's getting old. Do they assume Americans have endless patience for their ongoing investigation charade?

Consider the latest brouhaha between Trump and the Democratic leaders. They were scheduled to meet at the White House on a $2 trillion infrastructure plan when Pelosi decided to poison the punch bowl.

Ahead of the meeting, Pelosi and five investigative committee leaders spoke with other Democrats who had called for an impeachment inquiry. Afterward, she made an unsolicited public statement.

And she feigns outrage that Trump cut the meeting short?

What an unprovoked slap in the face — and right before she was to meet with Trump! If I were getting ready to negotiate a contract for a client, would it be wise for me to publicly trash the opposing attorney in advance of the meeting? How would that work out for my client?

Democrats and the liberal media ceaselessly complain about Trump's demeanor and manners, yet they treat him like a twice-removed criminal stepchild. Why don't more people talk about their ill-mannered behavior and incivility? Or are they entitled to a pass for any level of abuse toward Trump because they have so consummately dehumanized him among their base? It's to the point where Trump haters consider rudeness toward him a badge of honor.

The Democrats are a one-note samba. They have no positive agenda — nothing constructive in their arsenal. They have staked their entire political fortune on destroying, discrediting and removing Trump, and, having failed at every turn, they are in denial. They will not give up the ghost.

They had an entire cadre of deep-state Obama administration FBI and DOJ officials on a mission to frame Trump as a treasonous rogue who conspired with Russia to steal the election from the unelectable Hillary Clinton. Their abject failure to bring home the bacon didn't deter them one bit, for they kept the conspiracy alive into the Trump presidency, even manufacturing a factual scenario that gave them colorable grounds to call for the appointment of a special counsel to investigate.

This anointed special counsel enlisted some 20 left-leaning investigators, cloaked with carte blanche authority and a virtually unlimited budget, to bring down — er, fairly and objectively investigate — the president. They pulled no punches. They engaged in no half measures.


Everyone knows they are keeping these investigations alive to kill Trump's presidency by a thousand cuts. If they truly have abandoned the impeachment fantasy, it is only because they have nothing, and they know it would backfire in 2020. Sadly for them, most Americans are surely not muddled enough to believe that President Trump or his confidantes obstructed an investigation into something of which he knew he was innocent.

Pelosi said she was ready to give Trump a once-a-century win on his infrastructure plan. But Schumer said that Trump came prepared to quickly end the meeting, implying he wasn't sincere about working on the plan. "He is looking for every excuse. ... Now that he was forced to actually say how he would pay for it, he had to run away."

This doesn't pass the laugh test. Pelosi and Schumer know better. Trump campaigned on a grandiose infrastructure plan. Please Google it. It is Schumer, Pelosi and their fellow Democrats who will never give Trump a victory on anything, let alone a once-a-century win. Even if Trump were to give them everything they wanted, they would not sign off on it, because their sole agenda — still, after they've struck out every step of the way — is to destroy Trump. It's a fool's errand.