No, Obamagate Is Not a Trump Diversion 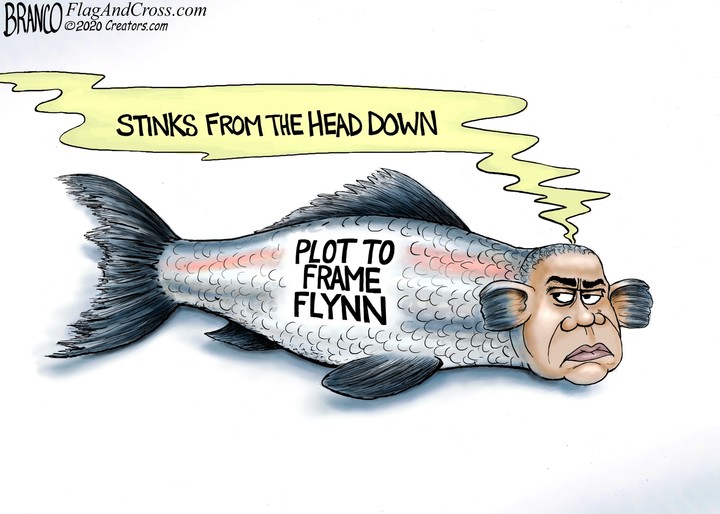 No, President Donald Trump is not ranting and raving about Obamagate to keep himself center stage or to distract attention from COVID-19, as liberal media are suggesting. They still don't get Trump.

Two recent columns contend that Trump has ulterior motives in harping on Obamagate — the notion that the Obama administration tried to destroy Trump with the myth that he colluded with Russia to steal the 2016 election.

Wrong. How about we draw the most obvious inferences from Trump's statements instead of the liberal establishment's theories, which are far more outlandish than the Obamagate conspiracy they're ridiculing.

Everyone knows that Trump has long been outraged by the Russia hoax, and with good reason. Even after he has been thoroughly vindicated of this frame job, the perpetrators have escaped accountability, and the left still pretends Trump is the guilty party.

Trump was effectively exonerated when the vaunted, high-powered and obscenely funded Mueller team couldn't find a shred of evidence to tie Trump to Russian election meddling. Now, with the revelation that Obama administration officials and the FBI collaborated to incriminate General Michael Flynn, we have a smoking .357 Magnum in the hands of scores of those officials.

It is the liberal media — not Trump — who are trying to divert the public's attention from a story — the one showcasing the Democrats' complicity.

If we had never heard of COVID-19, Trump would be railing against this corruption even more vigorously than he is now, because most of his day is consumed by virus-related health and economic issues. But don't bother telling that to Trump-obsessed journos.

CNN's Oliver Darcy writes that although the virus has killed 82,000 and left millions unemployed, Trump and his conservative media allies are "constructing a separate alternate reality to keep their fans distracted from the news and outraged at the long-standing villains in the right-wing media universe."

Though this might stun Darcy, we hayseed Trump deplorables are capable of walking and chewing tobacco simultaneously. Notwithstanding our diminished capacity, we stay abreast of virus and economic updates, which constitute 99.9% of the news, even with coverage of the Obamagate story the liberal media are trying to suppress.

Actually, Trump wants us to focus on the virus and on out of work Americans because he is determined to prudently reopen the economy precisely to help the same people these journos claim he is ignoring. If Trump were trying to shift our attention from the economy or the virus, why would he publicly disagree with Dr. Anthony Fauci on the reopening of schools in the fall? Moreover, it is inconceivable that he could avoid virus-related issues during the campaign even if he tried. The media's diversion claim is patently absurd.

Politico's Jack Shafer is promoting the bizarre theory that Trump is pushing Obamagate and other "outrageous claims" because he wants the spotlight on himself, even if only for critical coverage: "Making him the subject of our conversations is almost as good to Trump as making him the video camera's focal point. ... Obviously, he'd like it better if the commentariat praised him, but if they're going to criticize him, he's content to annotate the insults and censures and repurpose them as offensive weapons. ... Baseless charges like these (Obamagate, China, Joe Scarborough, QAnon) are the perfect refuge of a rhetorical arsonist like Trump, who scorches the earth with controversy and confusion so nobody knows where to find the truth."

Sorry, Mr. Schafer, but Trump truly believes he was set up with the Russia hoax, and the evidence supports him. That's why he's ranting about it even while COVID-19 is still with us. No matter how much you mock it, no matter how much you want the country to focus solely on the virus, life has to go on, and other issues, especially Obamagate, still matter.

There must be a reckoning for the political party that abused governmental power to engineer a coup against the other party. In a saner world, Democrats would agree with this, as it was the premise upon which the bogus Russia-Trump investigation was based. Progressives pounded the table for three years over Trump's alleged theft of the election, and they now expect us to shuffle docilely into the night when we have his opponents dead to rights doing the very thing they accused him of doing?

So, no, gentlemen, you are hopelessly off base. Trump intends to keep the coronavirus-related issues on the front burner. They must be if he is to lead America back to health and wealth. Unlike the left, he is not ignoring the economic devastation caused by this virus. Unlike the left, he is taking action instead of engaging in "rhetorical arson," if I may humbly borrow Schafer's incendiary term.

The left can smear Trump from their basements for not waving his wand and immediately accelerating our COVID-19 testing capacity to a billion per month and for the economic devastation caused by shutting down the economy. But they show unprecedented audacity blaming him for a death count that would have been worse and for an economic shutdown that would go on indefinitely if they were in charge.

Unhappily for the media, President Trump is alert, engaged and proactively addressing a comprehensive range of issues affecting Americans. He is fully capable of calling attention to this Democratic corruption of shocking magnitude without impeding his efforts to make America well and prosperous again.