Many University Campuses Are Playgrounds for Insanity 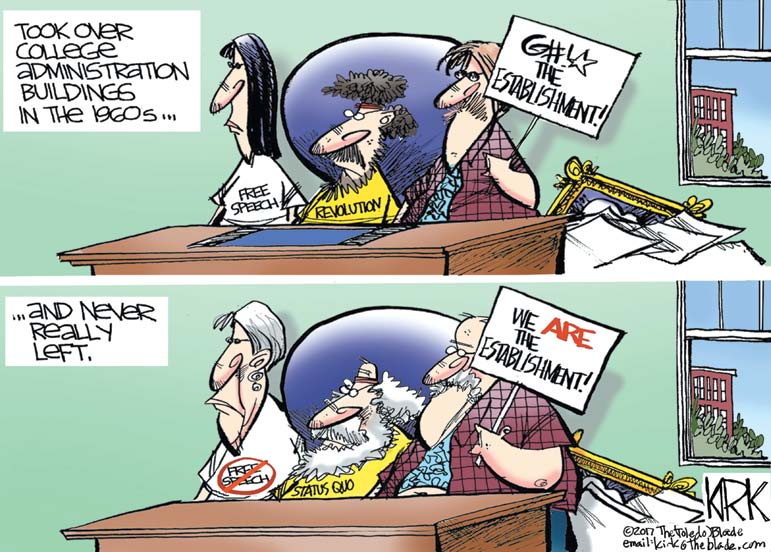 If you think the left hasn't taken over university life in America, you are probably not paying close enough attention or in denial.

I'm not just talking about the liberalism of the professors and the core curriculum but about all of college life. There are glaring examples of leftist extremism everywhere you turn, and they're so loony that even sane liberal parents should be concerned.

In September, a Michigan State University student awoke from his nap to an apparently unbearable sight, according to The College Fix. His roommate was watching a video of conservative commentator Ben Shapiro. I can guess what some of you must be thinking as you read this: "I sure am glad my kids were never exposed to such provocations, such obnoxious, inconsiderate and uncaring roommates."

You are probably also thinking, "But if my kid had been the subject of such a triggering event, I hope he would have had the presence of mind to exercise self-help and extricate himself from the hostile environment."

In this instance, the innocent victim didn't react violently. He calmly booted up his own computer and filed a complaint against his roommate with the administration's bias reporting system. Kind of makes you well up with vicarious pride, no?

"Ben Shapiro is known for his inflammatory speech that criticizes and attacks the African American community," wrote the student in his complaint. "I thought hate had no place on MSU's campus yet MSU has roomed me with someone who supports hate speach" (misspelling in the original quote).

As a parent you will also be gratified to learn that the university dutifully dispatched an investigator to dig into this urgent matter and to work for a "room change if the claimant would like one."

A few observations. Ben Shapiro communicates directly and refuses to bow to the gods of political correctness, but his speech is not inflammatory unless you define that as any utterance that leftist students disagree with and therefore unreasonably consider to be incendiary. Nor does Shapiro attack the African American community, and the false allegation that he does is far more inflammatory than anything he says in his podcasts or speeches.

That a major university would even dignify a complaint so frivolous on its face is deeply disturbing. In a sane campus situated in a sane world, a sane administration would have informed the offended student that universities are institutions of higher learning that promote freedom of academic inquiry. It would have told the student that he, not his innocent roommate, is the one who has the problem. He would have to learn that differing political viewpoints are not grounds for psychiatric alarm or switching roommates.

If, on the other hand, the Shapiro-friendly roommate had persistently accosted the offended snowflake in a ceaseless effort to proselytize him, that might be a different story. But in this case we are talking about a roommate minding his own business and watching a video on his own computer. As long as leftists all around us continue to portray mainstream conservative speech as hate speech and inherently racist, sexist, homophobic and all of the rest — and that's exactly what they do — then we'll see such faux controversies continue to proliferate. Our leftist culture is indoctrinating kids from the crib to the academy that conservative ideas are so heinous that merely harboring them in the presence of a liberal is a microaggression that demands redress. If I'm exaggerating, then please explain the aforementioned incident — and hundreds of others like it.

I'm sure you realize that if my word limit for this column were 70,000 words, I could fill it with similar examples. Let me leave you with a few more from The College Fix, lest you think I'm blowing conservative smoke. For more, check out the website.


Wake Forest University is hosting a series of "listening sessions" for faculty and staff of color (no white people allowed) to promote "inclusivity" in response to a student protest over "white supremacy." Don't bother to look up the definition of "inclusivity." Leftists have seized control of our dictionaries, too. LOL.

During a guest lecture at Boston University, a University of Washington professor who specializes in "whiteness studies" reportedly railed against colorblindness, saying that white people who see people as individuals rather than as members of their race are "dangerous." I hope I don't need to remind you that this is wholly out of phase with the teachings of the universally revered Dr. Martin Luther King Jr. — not to mention just outright bizarre.

I shouldn't have to issue a disclaimer, but as a matter of self-protection I will: Nothing I'm saying here is to diminish actual displays of racism when they occur. They can and should be addressed. But it should be obvious that the political left has bastardized our language by redefining terms to demonize political opponents and suppress their speech.

Incalculable damage is being done by characterizing differing opinions as "hate" and "racist" when they are nothing of the sort. Leftists are causing immeasurable suspicion, distrust and divisiveness in teaching that conservatives and/or Trump supporters are bigoted. Such slanders are exacerbating the very conditions they purport to address, and people need to speak out against this destructive trend in our culture and on our campuses.