Trump Is a Threat to the Constitution? Nice Try, Nancy 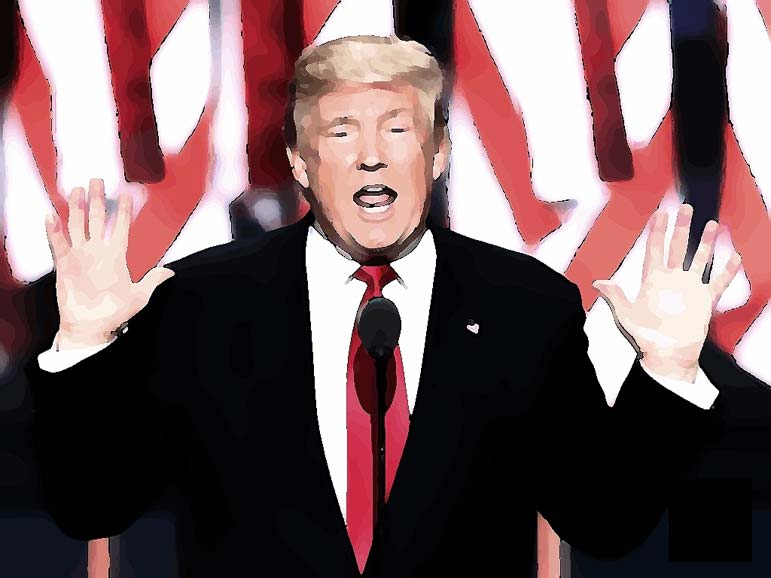 This week, two high-profile Democrats mouthed their party's delusional mantra that President Trump is a threat to the Constitution — a rich allegation from those would dismantle major pillars of our republican system of government.

While the Cathedral of Notre Dame in Paris was still burning, quixotic impeachment crusader Rep. Steve Cohen said on MSNBC's "Hardball," "What he has done to the Constitution and the rule of law is as bad as that fire did to Notre Dame. He's torching the entire structure of government and the people's respect for it. And the Congress needs to act." Poor form, poor judgment and just plain over-the-top insanity.

The next day on CNN, House Speaker Nancy Pelosi said, "Everything is at stake in this election: the Constitution of the United States, with the president who's trying to usurp the power of the legislative branch of government; the environment in which we live; a Republican Party that is in denial about the assault on climate and the climate crisis, which is a health issue, a national security issue, an economic and jobs issue, and a moral issue." Misguided, incoherent hyperbole.

I doubt that these dueling attacks were coordinated. When the party sings from the same hymnal — at least on Trump — conspiratorial coordination is unnecessary. But it's noteworthy that they're still beating this drum, even though their collusion gambit has backfired and considering that they are the ones engaging in a full-scale assault on the Constitution. Let us count the ways.

The framers believed our rights are God-given and thus inalienable, and they sought to ensure them by designing a system of limited government. Just providing for the people's democratic participation would be insufficient to secure their liberty, because people can vote themselves into tyranny. They knew men aren't angels and that, left to their own devices, they would eventually subjugate others.

So, in addition to establishing the Bill of Rights, they divided power among different levels of government — national, state and local — and within the federal branch — legislative, executive and judicial. They crafted a partially but not purely democratic system. Indeed, they imposed safeguards against pure democracy (including the Electoral College), which they knew could lead to mob rule.

Democrats complain about Trump's supposedly authoritarian disposition — pointing to his bullying nature and combative tweets, as if Stalin, Mao or Hitler would have relied on such anemic methods to amass their power and terrorize their people.

Please don't respond that Trump is engaged in Nazi-like propaganda, and that he threatens the freedom of the press by calling the "fake news media" the "enemy of the people." Trump is mostly defending himself against the daily barrage of propaganda leveled against him by a dishonest, monolithic leftist media that is the arm of the Democratic Party. His rhetorical rejoinders seek to showcase the unfairness and dishonesty of his detractors.

And unaccompanied by any effort to muzzle them, they are, in the scheme of things, harmless. They are certainly no threat to the Constitution.


Long before their recent barrage of proposals to alter and circumvent the Constitution to make it easier for them to win elections, the Democrats worked to undermine our system of limited government. Their judicial activism resulted in the judiciary usurping powers from the other two political branches, thereby upsetting the constitutional scheme. Their penchant for their presidents to issue unlawful executive orders has also undermined the balance of powers. Their passage of the Administrative Procedure Act in 1946 resulted in an enormous power shift from Congress to unelected, unaccountable executive branch bureaucrats whose administrative agencies are models of the type of tyranny the framers warned about because they combine legislative, executive and judicial powers under one tent.

By the way, the allegedly anti-Constitution ogre, President Trump, has done more to disempower this "fourth branch of government" than any other president, and the constitutional system is stronger, not weaker, as a result.

More recently, Democrats have proposed a rash of disturbing ideas designed to alter our system of government through fundamental changes in our elections. The same Steve Cohen who's now yelling about President Trump's threat to the constitutional order introduced a bill to effectively eliminate the Electoral College and provide for the direct election of the president and vice president. Democrats have advanced proposals to pack the Supreme Court, and a majority of them have voted to reduce the voting age to 16, which is egregious on multiple levels and unwise.

In addition, Pelosi introduced the euphemistically dubbed For the People Act, which would overhaul federal election laws to micromanage and centralize the election process now administered by the states, and which would favor the election of Democrats. Other examples of Democrats' mischief that impairs free and fair elections include their opposition to voter ID laws and their objection to a citizenship question on the census form.

And please don't get me started on the Democrats' failed coup to delegitimize and oust President Trump, or their ongoing efforts to baselessly impeach him. Suffice it to say that he represents no threat to the Constitution, but Democrats do. But why shouldn't they? Many of them have openly said that America is not that great, so why trifle over preserving the integrity of the document whose ideas make it unique?