Rush Limbaugh: A Loving Brother and 'a Friend to Countless Americans' 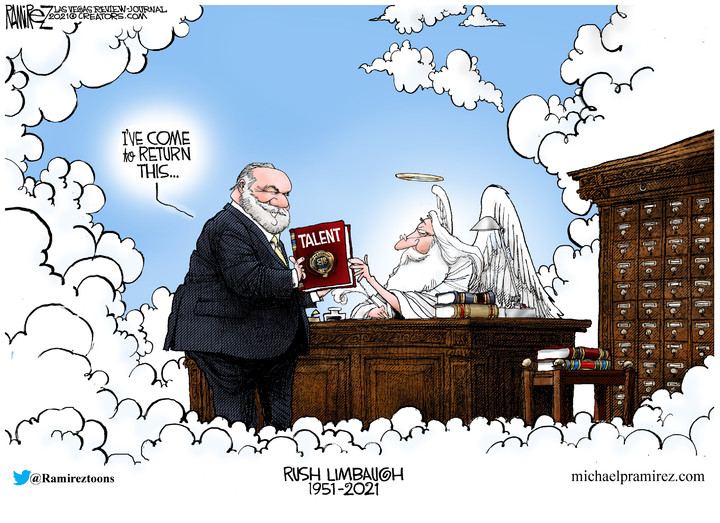 Editor's note: David Limbaugh wrote the following column in February 2020, just after his brother's diagnosis. He will have more to say about his brother's passing next week.

I am uniquely blessed to be Rush Limbaugh's brother in ways too numerous to count, and I am blessed to be in the special position of witnessing firsthand the outpouring of love and prayers from his, family, friends and fans. His wife, Kathryn, has been amazing and a rock throughout.

I could fill a book with the well-wishes I've received. I sent Rush a link to my "mentions" column on Twitter so he could scroll through it and see for himself what he means to so many people.

These tender expressions of goodwill are uplifting and spiritually affirming. G od is at work, and however this plays out, G od is good, something Rush has been saying repeatedly in the last few weeks, despite his difficult circumstances.

Many of the messages he has received have brought him to tears, which is not typical for him. These are sobering times.

When Rush began his nationally syndicated radio show, the liberal media monopolized television news, and his show became an oasis and a lifeline for millions who felt their voices had been ignored. He gave them a sense of community, as they came to realize that the principles they believed in, their love for America and its founding ideas, were still commonly held.

He has been depicted as a bombastic shock jock who barely believes his own words and simply exploits his talents to enrich himself. In fact, he has been a calming voice of good cheer, humor and optimism — a respite from the message of negativity and moral chaos emanating from liberal America every day.

Many have praised Rush for saving AM talk radio and creating a professional genre in which he would have no peers — and that's true. But what moves me more, as his brother, is something I fear people don't sufficiently appreciate.

He has been the tip of the spear for political conservatism. No one has done more to bring conservatism into the mainstream of American life, and he's paid a heavy price for it — but he never complains. He has been the left's favorite target for hate and abuse for decades, opening myriad pathways for thousands of other conservatives to bring their talents and share their message with like-minded Americans. Had Rush not absorbed that mistreatment and kept charging forward with contagious optimism, there is no telling where we would be right now. No matter how fiercely the haters try, they can't bring him down — they can't even slow his charge — and more importantly, they cannot wipe the cheer from his face.

They have particularly seized on President Donald Trump's awarding of the Presidential Medal of Freedom to Rush. Yes, Rush has been a stalwart Trump supporter, but this is not just political. I have given this a lot of thought, and as preposterous as this sounds to his detractors, Rush richly deserves this award — if it is truly intended to honor those who have served the cause of American freedom. For the cause of American freedom, after all, is what Rush is about. It is the essence of what he articulates and promotes. People, especially our soldiers, serve the cause in various ways. But Rush advances it in a different way, and one that should not be undervalued. He helps keep the spirit of liberty alive. He helps sustain the ideas that have made America the freest, strongest and most prosperous nation in history, and a glorious blessing to the world. And sustaining these ideas is indispensable to sustaining our liberties.

Rush's detractors don't hate Rush because of the type of person he is. They have no idea. They hate him for what he stands for, and because he has been so effective at promoting ideas they find repugnant. I see it every day. Their hatred is actually transferred hostility for all those who reject their rejection of the American dream. They would not comprehend the showering of love that I've personally witnessed since Rush announced his diagnosis. Here's a heartwarming sampling.

A text from a Democratic friend: "So my buddy called me. He and 50 others are going on a fast to pray for your brother and another person in their group. They did it before for a person in their group and he is cancer free. You guys sure have a lot of people that love you and your family. Awesome."

Someone tweeted me: "Prayers for you and your family. We are surrounding Rush with prayers of healing and comfort. Everyone was crying when he received his medal. He has done so much to open Americans' eyes to the truth. G od bless."

Another tweet: "First time I heard Rush in the '80s I thought: I am not alone in my thinking."

Another: "I was so thrilled to see him receive the Presidential Medal of Freedom. He has worked so hard to educate millions of us that it was well earned. Rush is so important to me. I was crushed to hear the news. I love him very much, as do so many."

Radio host Chris Stigall wrote: "The thing he does better than any other broadcaster I know is connect. That has always been the thing his haters understood, even if they couldn't articulate it. He formed a bond and a trust that cannot be broken. ... Rush Limbaugh connects with good cheer, warmth, sincerity, a sense of humor and a sense of the everyman no one else fully possesses or can stylistically equal. Despite his fame and wealth over a thirty-plus year career, Rush Limbaugh never became cynical, or hateful, or condescending, or mean-spirited. He loves his country and the people who make it work so very much. It leaps from the speakers every day."

Bob Lonsberry, another radio broadcaster, wrote: "I love Rush Limbaugh. That's what I realized yesterday when I heard. ... In that moment I was sickened and saddened and blindsided. It wasn't news, it was personal, and it wasn't about the legend who created and sustains the industry in which I work, it was about the joyous voice that's been part of my life for more than 30 years. ... It is impossible to calculate the good he has done for America as the leading voice in defense of our nation's principles of liberty and in opposition to the doctrines of chaos and oppression. ... And he is always optimistic. ... With Rush, there is always a path forward, and a sense that it's going to work out. ... no matter how the media characterizes him, he is a happy man. He doesn't bring people down, he lifts them up. ... But is he first and foremost a friend to countless Americans? That's how it looks to me. And that's how it feels to me. The news yesterday wasn't about a prominent person, it was about a personal friend. And I'm not the only one. There are tens of millions just like me. Who have found comfort, friendship and validation in a man on the radio. And yesterday hit us hard."

Exactly. When I read or hear the haters talking about Rush, his show, his message, his soul, I realize I inhabit a different universe than them. They distort who he is, what he says, what he stands for, the kind of person he is. Their antipathy is disturbing. They actually wish him physical, emotional and spiritual harm. "I'm rooting for the cancer." "I wont be happy until he's until he's screaming in agony 24/7." Lovely. As passionate as I am about my own political beliefs, I never wish harm on those who disagree. If anyone needs prayers, it is them — and I mean that sincerely.

Rush has inspired so many people like this one: "But the main thing I wanted to tell you is that you really did make me who I am now. ... You MADE me. Because of you, I was able to completely change careers. ... I love what I'm doing now — and, I hope I'm making a difference. I owe all of this — every bit of it — to you. So thank you — for that, and for all you taught me over 36 years and counting."

I have to say that while I've always known Rush is strong, I've never seen anything like how he has handled his diagnosis. He has honestly shown no concern for himself. His overriding concern is for his audience, his family and his friends. He is determined not to let any of us down. He seems more concerned about how this news will impact me than how it is affecting him. I am not exaggerating. He has shown more grace and class in this time than I would have thought possible. I couldn't be prouder of him — and I'm even prouder that he is my brother.

No one knows what the outcome of this will be, but through it all, we must remain positive and optimistic. That matters. And we must draw closer to G od.

You Rush fans and well-wishers can't begin to understand how much you mean to Rush and to us. Your prayers are more comforting and more important than we can describe. G od bless Rush, and G od bless every one of you.