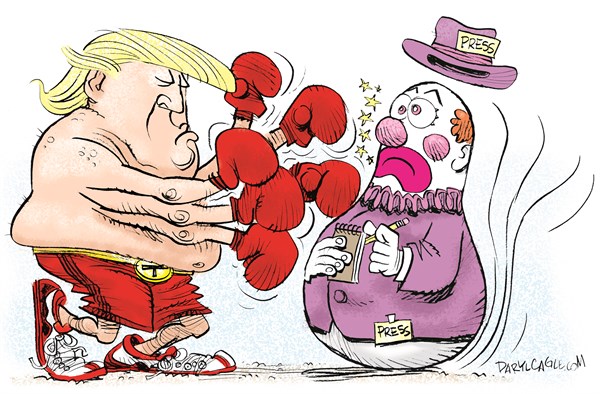 At the risk of sending the left into a state of apoplexy, a monolithic, biased, renegade, politicized press is a far greater threat to liberty than a president criticizing the media.

Like their First Amendment counterparts — the freedom of religion, the freedom of assembly and the right to petition the government — the freedoms of speech and the press are an important part of what has made the United States the freest and greatest nation in world history. It is fitting, then, that we elevate them to such venerated status in this country.

But it's important that we distinguish these constitutionally guaranteed liberties from the press itself, which theoretically serves as a watchdog against governmental excesses and abuses. There's no question that a free press acting in that capacity can function as a vital check on government.

We must remember, however, that the institution of the press is not itself sacrosanct like the liberties that undergird it. It is made up of individuals and entities subject to the flaws that inhere in all human beings.

Just being a news network and journalists doesn't make them sacred or above criticism and accountability. Just as the Framers separated governmental powers among the legislative, executive and judicial branches of government and pitted them against one another to deter encroachments and usurpations by one branch against the others or against individuals, the Framers also conferred the freedom of expression on individuals and non-journalistic entities, as well. One does not have to be a journalist or a member of the media to possess the freedom of expression. Individuals, other entities and even officeholders have just as much a right to hold the press accountable as the press has to hold the government and government officials accountable. Let's not lose sight of that as we examine this ongoing clash between the media and President Trump.

The insular echo chamber that is the mainstream liberal press has a very high opinion of itself. Many journalists seem to believe that merely being a member of that group invests them with unique moral authority and entitles them to condescend and treat rudely people and especially politicians and government officials with whom they disagree ideologically.

Have you watched, for example, how insolently CNN's smug Jim Acosta treats White House press secretary Sarah Huckabee Sanders and, when he gets a chance, President Trump himself? I suppose he has a right to be as insulting and annoying as he wants, but Trump, Sanders and the rest of us have an equal right to call him out for behaving this way.

The constitutional guarantees under which Acosta and media institutions operate do not contain a corollary that prohibits others from critiquing and criticizing them and holding them accountable. And they often need to be held accountable, especially considering how much power and influence they have and how egregiously biased they are.

If you have any doubt as to the collective misbehavior and excesses of the liberal media, just review their hysterical witch hunt against President Trump's medical condition. In questioning Trump's physician, these people acted like 5-year-olds. I don't know about you, but I'm going to exercise my right to lampoon them for their ludicrousness.

President Trump not only has every bit as much a right to criticize the media as they do to criticize him but also does not represent a threat to their liberty or to anyone's individual liberty by issuing such criticism. Those, like Sen. Jeff Flake, who compare Trump to Josef Stalin for criticizing the press or for calling for tougher libel laws are in danger of oxygen deprivation and mental confusion from such hyperventilation.

I don't happen to agree with President Trump that we need stricter libel laws, but that doesn't mean I believe he's flirting with tyranny for advocating them. That he is recommending a legislative solution to the problem demonstrates, by definition, that he is operating constitutionally, not autocratically. He is suggesting that the law be changed through proper democratic processes.

If the whining Sen. Snow-Flake is so distressed over Trump that he would grossly compare him to the mass-murdering Stalin, then maybe he should either have the courage to run for re-election so he could continue to try to be a thorn in the president's side or start a blog when he retires, where he could continue to exercise his First Amendment right to bellyache about President Trump and nauseate his former constituencies.

For decades, conservatives have had it with the incorrigibly biased liberal media's cherry-picking and distorting the news to serve their political aims, and you can be sure that many of us are happy that we now have an alternative media to counter their excesses. Nor are most of us troubled by President Trump's exercising his freedom to take them to task.

If you don't like that Trump criticizes the media, whose main reason for existence seems to have been reduced to destroying him and his presidency, then criticize Trump — which you will anyway. But please, let's not hear any more nonsense about how he's abusing or exceeding his constitutional authority by challenging them. When you continue down that road, you just make my case stronger. No one in this nation, no matter how big his megaphone or how prestigious her journalistic credentials, is above criticism. So, liberal media, please get over yourselves — and in the meantime, why don't you try to be a bit fairer, more objective, less biased, truly journalistic and, not least, less rude?