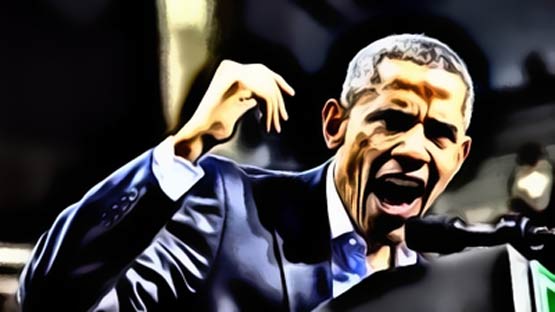 In their State of the Union speeches, all previous presidents presented their policies in the most favorable light, but did they go so far as to distort reality? Did they use them to trash their opponents?

I don't think so. But in his last one, Obama did, and adding insult to injury, as always, he pointedly decried partisan sniping right before launching into another episode of partisan sniping. It's as though he doesn't even realize he's being hypocritical on steroids.

Obama is also the first president to have framed his SOTU speeches, in part, as high-school debate rebuttals. He must tell his speechwriters to bullet criticisms of his record and then craft a point-by-point rebuttal. If you haven't noticed, it's a formula for negativity and partisan rancor — the very things he denounces.

In addition, no other president has presented his record so inaccurately that informed and unbrainwashed viewers must conclude that the primary target of Obama's deception is Obama himself. If he were capable of digesting how bad his record is, he surely wouldn't embarrass himself by portraying it so falsely.

Obama claimed that there are no existential threats facing this nation, that his economy is robust, that his educational record is stellar, that people who are skeptical that global warming is man-made are fools, that the United States is more respected internationally now than it was before he took office, that Obamacare has lived up to its promises, that the military is overfunded, that ISIS members are just fanatics and killers riding around in pickup trucks, that his "clean energy" programs are superior, that people who support entitlement reform are the irresponsible ones — saying we should actually double down on these bankrupting boondoggles — that proponents of an orderly immigration system are bigots, that Ted Cruz's pledge to aggressively pursue the Islamic State is code for deliberately bombing innocent civilians, that he himself deserves praise for reducing the deficit, that he values bipartisanship and compromise and ideas other than his own, that it's morning in America and that he's just getting warmed up and planning on engineering further transformational change at the expiration of his term.

Can you imagine having this record of failure, bragging about it and promising to deliver more misery into the indefinite future? It would be like the owner of the Chicago Cubs pledging to keep winning the World Series.

As for existential threats, try ISIS, a government-sponsored invasion of our borders by immigrants whom the left encourages not to assimilate or embrace the American idea, out-of-control entitlements, the exploding national debt and the systematic assault on the Constitution and rule of law by a renegade executive branch and cynical, activist judiciary branch.

Obama's recovery is the worst in 50 years. He insists we accept anemic 2 percent growth as the new, wonderful normal. The labor participation rate is at its lowest since the 1970s. The median household income has fallen to a 20-year low, as has homeownership. Dependency programs, including food stamps, have skyrocketed. The poverty level is soaring. And Obama is hellbent on doubling the national debt. If it weren't for some mild Republican resistance, there is no telling how much higher spending would be. He mocks responsible people who would structurally reform entitlements, which are guaranteed to become insolvent and also bankrupt the nation.

Obama touts his clean energy program but omits that government is subsidizing it and sabotaging the natural gas and coal industries. It's pretty easy to take credit for the winners when you abuse power to pick winners and losers.

Though Obama boasts that Obamacare has caused 18 million more to be insured, it has been a complete disaster. The overwhelming number of additional insured people are from Medicaid expansion. People have lost their doctors and plans in droves. Premiums and deductibles have not decreased as promised but increased enormously.

Though Obama ridicules non-joiners of the apocalyptic global warming cult, he has never explained how the draconian measures he favors, even if fully implemented, would make a dent in reducing mean global temperature over the next century.

He has made a consummate mess of foreign policy, engineering the decline of the United States as the world's sole superpower, alienating our allies and coddling our enemies. He continues to defund the military; the Army will decline by some 40,000 more soldiers in the next two years alone, and we're below strength necessary to fight in two different theaters — always viewed as the acid test for readiness. He has grossly mistreated Israel, to which Saudi Arabia and Egypt have now had to turn because of his untrustworthiness. He claims to have ISIS contained — though it is in 20 nations, continues to wreak havoc in the Middle East and is a significant threat in the United States and Europe in the eyes of former intelligence, military and security advisers.

Then there are things Obama didn't mention, such as his record-breaking performance in dividing the nation along racial, gender and economic lines. His commandeering of the IRS to target his political enemies. His multi-pronged assault on the Constitution. His assaults on religious liberty. His nightmarish concessions to Iran, which have emboldened its tyrannical regime to be even more defiant — already violating the nuke deal with its ballistic missile program and lawlessly kidnapping our sailors.

Yes, folks, things are going swimmingly, and there's nothing to see here, so let's turn the volume down, OK?