The Delusional Self-Importance of the Liberal Media 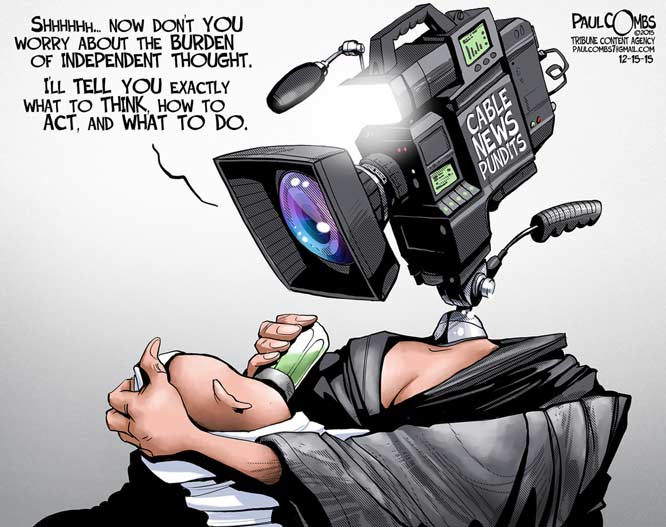 I have long marveled at liberals' air of superiority and lack of self-reflection, which have always been particularly evident among liberal media elites and journalists. They tend to view themselves as sacrosanct and above scrutiny.

Perhaps this attitude sprang from the British and, later, American tradition that the press is the Fourth Estate. It doesn't just serve to inform the people and make them better contributors to the democratic process. It is the virtual fourth branch of government, operating as a watchdog on the formal branches to further check their potential abuses of power.

It is a heady concept to believe you function to keep the powerful in check. It is even more so when no one has ever told you that you, too, need to be kept in check. As a result, some journalists seem to believe that what they do is so important that nothing will deter them from ambitiously exposing to the public every titillating morsel of information, even if that information might unnecessarily harm people or the national interest. To some of the most self-righteous among them, catering to the public's "right to know" is like an unbending religious ritual that transcends every other value in the universe and justifies the vomiting of all information, no matter its actual value to the public or its likelihood of gratuitously harming others.

If you've ever watched a panel interview of major-network talking heads, you have heard their professions that they have a crucial role in keeping our government honest. That's fine as far as it goes, but it is rarely tempered by humility and an awareness that they, too, are capable of corruption and vulnerable to the trappings of power. They are astonished that anyone would ever question their noble character and honorable intentions. It is as if they are saying, "As to the dissemination of news, we are gods, and gods do not need oversight."

You could especially see their indignation at the rise of the alternative media — e.g., conservative talk radio, Fox News Channel, blogs, other Internet news sources and conservative speech on a variety of social media platforms. Surely, you've seen some of the major news media figures of yesteryear shaking their heads in consternation over the lack of proper journalistic processes in the alternative media, which, they contend, has resulted in sloppy and biased reporting.

It has amazed me to witness their delusional self-assessment. For all of their puffery, it was their own arrogance, bias, corruption, sloppiness and unfairness that led to the rise of the alternative media. Despite their nearly monolithic liberal views, the mainstream media figures truly believed their own work was above reproach.

They've neither been chastened nor learned from the rise of their competition, which could be clearly seen in a recent exchange between CNN's Brian Stelter and Donald Trump's national spokeswoman, Katrina Pierson. Stelter tried to shame Pierson into admitting that Trump's attack on the media's honesty was misguided and destructive.

Kudos to Pierson for adeptly dismantling her smug CNN interrogator. No matter what you think about Trump, she put on a clinic on how to turn the tables on liberal media bullies. One of the many reasons Trump is resonating is that he refuses to be bullied by political correctness, the political establishment and the media. He has provided a template for fighting back, and his spokeswoman put it into practice in that exchange. She refused to accept Stelter's false premises about Trump's alleged misbehavior and "factual inaccuracy" and instead redirected the discussion to media bias and dishonesty, putting Stelter on the defensive and often leaving him sputtering.

The clincher, however, was Stelter's last line of questions. He said it really worries him that by claiming the media are dishonest, Trump and others are "helping to erode trust in the press. The Fourth Estate, of course, is the press. So don't you think that might contribute to America being less great?"

I'm tempted to say that I couldn't believe my ears. But truthfully, this is exactly the point I've been trying to make here. Stelter might as well have just said outright that he believes the liberal media are special, indispensable and above scrutiny.

What he obviously doesn't grasp is that the media's role as government watchdog doesn't exempt it from accountability for its own excesses and abuses. After all, the three branches of government aren't beyond scrutiny just because they keep one another in check. And the media are no less vulnerable than the government to the trappings of power and to corruption and abuse. That's why freedom of speech and freedom of the press are so vital to our system.

The First Amendment doesn't just apply to an elite group of print and broadcast media outlets, as much as those elitists seem to wish it did. It applies to every American citizen and every media institution, including conservative talk radio, Fox News and other alternative media sources.

The takeaway here is that in their heart of hearts, many in the liberal media champion free speech not across the board but selectively, to ensure the unbalanced dissemination of their own biased viewpoint. This is why they are so threatened by the advent of the alternative media, why they and their liberal colleagues in government are forever trying to invoke the Fairness Doctrine to suppress alternative viewpoints, and why almost all efforts to suppress speech in this country come from the political left.

Don't be fooled by the liberal media's phony protests about their essential role in preserving good and honest government, because it is not honest government they seek but one that advances their shared liberal agenda.

Whatever we do, let's make sure we fight vigorously and incessantly to guarantee the robust dissemination of freedom of speech and freedom of the press for every person and institution that chooses to exercise these rights. This is the best check against abuses by government officials and also those by the media.