By endorsing Moore, Trump sunk the US presidency to unplumbed depths 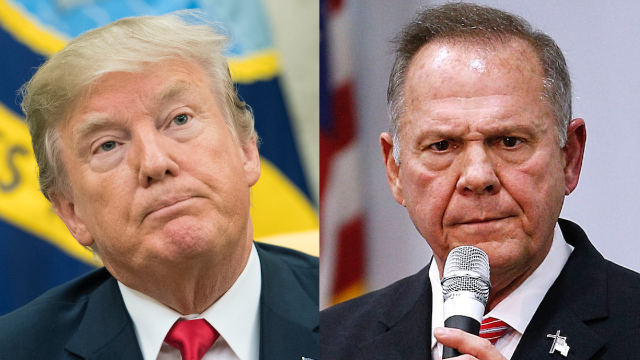 The first time ended badly, so when, 156 years later, Alabamians were incited to again try secession, this time from the national consensus that America is a pretty nice place, they said: No. No, that is, to rubbish like this:

Interviewer: "[Ronald Reagan] said that Russia was the focus of evil in the modern world."

Roy Moore: "You could say that very well about America, couldn't you?"

Moore: "Well, we promote a lot of bad things, you know."

Moore: "Well, then, maybe Putin is right, maybe he's more akin to me than I know."

In April, Alabama's Republican governor, Robert Bentley, resigned one step ahead of impeachment proceedings arising from his consensual affair with an adult woman. Eight months later, Alabamians spurned presidential pleas that they send to the U.S Senate a man credibly accused of child molestation. But the dispiriting truth is this: Behavior that reportedly got Moore banned from the Gadsden, Alabama, mall was, for most Alabama Republicans, not a sufficient reason to deny him a desk in the U.S Capitol.

Although the president is not invariably a stickler for precision when bandying factoids, he said the Everest of evidence against Moore did not rise to his standards of persuasiveness. This fleeting swerve into fastidiousness about facts came hard on the heels of his retweeting of a video of a Muslim immigrant in the Netherlands beating a young man holding crutches. Except the villain was born and raised in the Netherlands. Undaunted, Trump's remarkably pliant spokesperson, Sarah Huckabee Sanders, defended her employer from the nitpickers: What matters, she said, is not that the video is unreal but that "the threat" (of turbulent Dutchmen?) is real.

Moore was such a comprehensive caricature -- Sinclair Lewis could not have imagined (BEG ITAL)this(END ITAL) Elmer Gantry -- that the acid rain of reports about his sexual predations, and his dissembling about them, almost benefited him by distracting attention from: the remunerative use he made of a "charitable" foundation. And his actions as a public official that by themselves sufficed to disqualify him from any public office. He is an anti-constitutional recidivist, twice removed from Alabama's highest court for his theocratic insistence that his religious convictions take precedence over U.S. Supreme Court decisions, so he could not have sincerely sworn to "support and defend the Constitution" and to "bear true faith and allegiance to the same."

When reports of Al Franken's misbehaviors against adult women surfaced, the National Republican Congressional Committee pounced: "Democrats who took Senator Franken's campaign money need to ... return his donations." (Combined, they totaled $15,500.) When, 18 days later, Trump endorsed Moore, the Republican National Committee immediately sent $170,000 to Alabama. If the RNC, which accurately represents the president's portion of the party, did not have situational ethics it would have none.

Moore has been useful as a scythe slicing through some tall stalks of pretentiousness: The self-described "values voters" and "Evangelicals" of pious vanity who have embraced Trump and his Alabama echo have some repenting to do before trying to reclaim their role as arbiters of Republican, and American, righteousness. We have, alas, not heard the last from them, but henceforth the first reaction to their "witness" should be resounding guffaws.

Elation is in order because a gross national embarrassment has been narrowly avoided. But curb your enthusiasm because nationally, as in Alabama, most Republicans still support the president who supported the credibly accused child molester. Alabama, however, has perhaps initiated the inevitable sorting of Republicans who retain a capacity for disgust from the Vichy Republicans who have none. After the president's full-throated support of the grotesque, he should be icily shunned by all but his diehard collaborators. For example: When the president stages a signing ceremony for the tax legislation, no etiquette requires any Republican to be photographed grinning over his shoulder. Stay away.

By basking in the president's approval, Moore became a clarifier. Henry Adams, great-grandson of the second president and grandson of the sixth, was unfair to the 18th when he wrote, "The progress of evolution from President Washington to President Grant, was alone evidence enough to upset Darwin." By joining Steve Bannon's buffoonery on Moore's behalf, the 45th president planted an exclamation point punctuating a year of hitherto unplumbed presidential depths. He completed his remarkably swift -- it has taken less than 11 months -- rescue of the 17th, Andrew Johnson, from the ignominy of ranking as the nation's worst president.