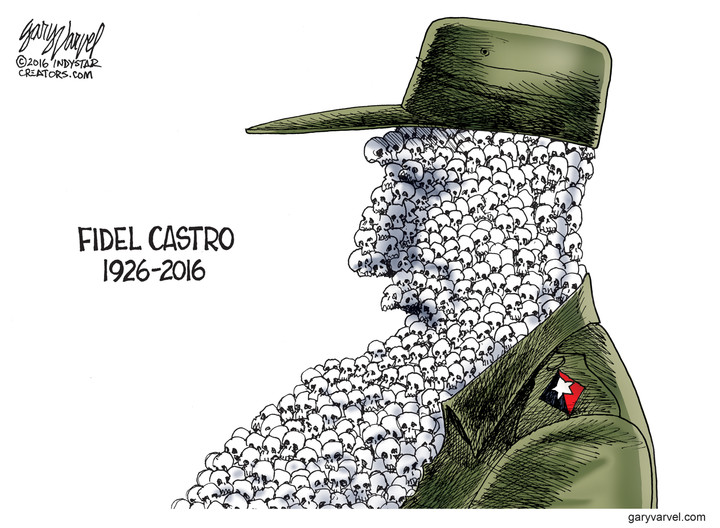 With the end of Fidel Castro's nasty life Friday, we can hope, if not reasonably expect, to have seen the last of charismatic totalitarians worshiped by political pilgrims from open societies. Experience suggests there will always be tyranny tourists in flight from what they consider the boring banality of bourgeois society and eager for the excitement of sojourns in "progressive" despotisms that they are free to admire and then leave.

During the 1930s, there were many apologists for Joseph Stalin's brutalities, which he committed in the name of building a workers' paradise fit for an improved humanity. The apologists complacently said, "You can't make an omelet without breaking eggs." To which George Orwell acidly replied: "Where's the omelet?" With Castro, the problem was lemonade.

Soon after Castro seized power in 1959, Jean-Paul Sartre, the French intellectual whose Stalinist politics were as grotesque as his philosophy was opaque, left Les Deux Magots cafe in Paris to visit Cuba. During a drive, he and Castro stopped at a roadside stand. They were served warm lemonade, which Castro heatedly said "reveals a lack of revolutionary consciousness." The waitress shrugged, saying the refrigerator was broken. Castro "growled" (Sartre's approving description): "Tell your people in charge that if they don't take care of their problems, they will have problems with me." Sartre swooned:

"This was the first time I understood - still quite vaguely - what I called 'direct democracy.' Between the waitress and Castro, an immediate secret understanding was established. She let it be seen by her tone, her smiles, by a shrug of the shoulders, that she was without illusion. And the prime minister .â€‰.â€‰. in expressing himself before her without circumlocution, calmly invited her to join the rebellion."

Another political innovator, Benito Mussolini, called his regime "ennobled democracy," and as the American columnist Murray Kempton mordantly noted in 1982, photographs of Castro "cutting sugar cane evoke the bare-chested Mussolini plunged into the battle for wheat." Castro's direct democracy was parsimonious regarding elections but permissive of shrugs. It did, however, forbid "acts of public destruction," meaning criticism of communism.

This charge condemned Armando Valladares, then 23, to 22 years in Castro's prisons. Stalin's terror was too high a price to pay for a great novel, but at least the world got from it Arthur Koestler's "Darkness at Noon." And although Castro's regime, saturated with sadism, should never have existed, because of it the world got Valladares's testament to human endurance, his prison memoir "Against All Hope." Prison food was watery soup laced with glass, or dead rats, or cows' intestines filled with feces, and Castro's agents had special uses for the ditch filled with the sewage from 8,000 people.

On April 15, 1959, 15 weeks after capturing Havana, Castro, then 32, landed in Washington at what is now Reagan National Airport. He had been in the United States in 1948, when he studied English and bought a Lincoln. This time, on April 16, in a concession to bourgeois expectations, he dispatched an aide to buy a comb and toothbrush. His connections to communism? "None," he said. He endorsed a free press as "the first enemy of dictatorship," and said free elections were coming soon. Then he was off to a Princeton seminar and a lecture in the chapel at Lawrenceville prep school, well received at both places.

By July red stars were being painted on Cuban military vehicles. Three years later, Soviet ballistic missiles were arriving. A year after that, a Castro admirer murdered the U.S. president whose administration had been interested in, indeed almost obsessed with, removing Castro.


U.S. flings at "regime change" in distant lands have had, to say no more, uneven results, but the most spectacular futility has been 90 miles from Florida. Castro was the object of various and sometimes unhinged U.S. attempts to remove him.

After the Bay of Pigs debacle, the Kennedy administration doubled down with Operation Mongoose, which included harebrained assassination plots and a plan skeptics called "elimination by illumination" - having a U.S. submarine surface in Havana harbor and fire star shells into the night sky to convince Catholic Cubans that the Second Coming had come, causing them to rebel against Castro the anti-Christ.

Socialism is bountiful only of slogans, and a Castro favorite was "socialism or death." The latter came to him decades after the former had made Cuba into a gray museum for a dead utopianism.