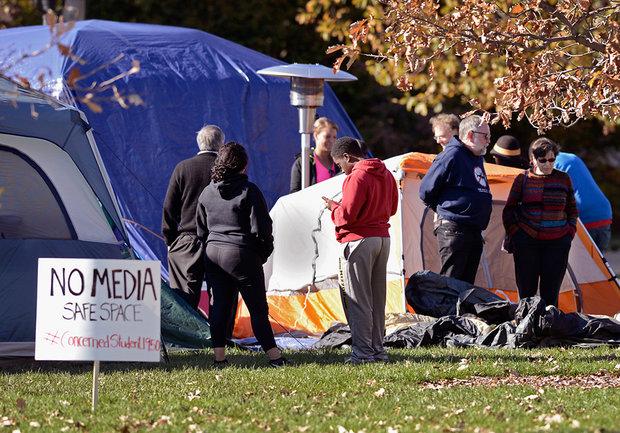 Give thanks this day for some indirect blessings of liberty, including the behavior-beyond-satire of what are generously called institutions of higher education. People who are imprecisely called educators have taught, by their negative examples, what intelligence is not.

Melissa Click is the University of Missouri academic who shouted "I need some muscle over here" to prevent a photojournalist from informing the public about a public demonstration intended to influence the public. Click's academic credentials include a University of Massachusetts doctoral dissertation titled "It's 'a good thing': The Commodification of Femininity, Affluence, and Whiteness in the Martha Stewart Phenomenon." Her curriculum vitae says she has a graduate certificate in "advanced feminist studies." Advanced. The best kind.

University of Missouri law students, who evidently cut class the day the First Amendment was taught, wrote a social media policy that included this: "Do not comment despairingly [disparagingly?] on others." A grammatically challenged Ithaca College professor produced this cri de coeur regarding the school's president: "There have been a litany of episodes and incidents during [his] tenure here which have led to frustration because, when brought to his attention, the view of the protesters is that he has been unresponsive." Symptomatic of Ithaca's intellectual flavor is another professor, who says agriculture is "capitalist, racialized patriarchy."

A Washington State University professor said she would lower the grade of any student who used the term "illegal immigrants" when referring to immigrants here illegally. Another Washington State professor warned in his syllabus that white students who want "to do well" in his "Introduction to Multicultural Literature" should show their "grasp of history and social relations" by "deferring to the experiences of people of color." Another Washington State teacher, in her syllabus for "Women & Popular Culture," warned that students risk "failure for the semester" if they use "derogatory/oppressive language" such as "referring to women/men as females or males."

The University of Tennessee's Office for Diversity and Inclusion, worried that students might be uncomfortable with gender-specific pronouns ("he," "she," "him," "her"), suggests gender-neutral noises ("ze," "hir," "xe," "xem," "xyr"). The University of California system's sensitivity auditors stipulated that "hostile" and "derogatory" thoughts include "I believe the most qualified person should get the job" and "America is the land of opportunity." The University of Wisconsin at Stevens Point's list of racial microaggressions includes "America is a melting pot" and "There is only one race, the human race."

Some Johns Hopkins University students proclaimed themselves microaggressed by the possibility of a Chick-fil-A restaurant on campus. (Chick-fil-A's chief executive defines marriage as Barack Obama did until 2012.) Mount Holyoke College canceled its annual production of "The Vagina Monologues" because it is insufficiently inclusive regarding women without vaginas and men who, as the saying goes, "self-identify" as women. "Gender," said a student, "is a wide and varied experience, one that cannot simply be reduced to biological or anatomical distinctions," and the show "is inherently reductionist and exclusive."

Writing in the University of California at Berkeley paper, two geographically challenged students objected to a class featuring Plato and Aristotle and other "economically privileged white males from five imperial countries (England, France, Germany, Italy and the United States)." A branch of the University of California at Irvine's student government passed a resolution against the display of flags. Written by a student in the School of Social Ecology ( "transformative research to alleviate social inequality and human suffering"), the resolution said flags are "weapons for nationalism" and "construct" dangerous "cultural mythologies and narratives" and "paradigms of conformity" and "homogenized standards" and interfere with "designing a culturally inclusive space."

Students on Columbia University's Multicultural Affairs Advisory Board suggested trigger warnings for persons who might be traumatized by reading, say, Ovid's "Metamorphoses," wherein some myths portray bad sexual behavior. But a feminist blog warned that the phrase "trigger warning" itself needs a warning attached to it because it might remind people of guns. But, then, the word "warning" might [substitute word for "trigger"] fright.

So, today give thanks that 2015 has raised an important question about American higher education: What, exactly, is it higher than?