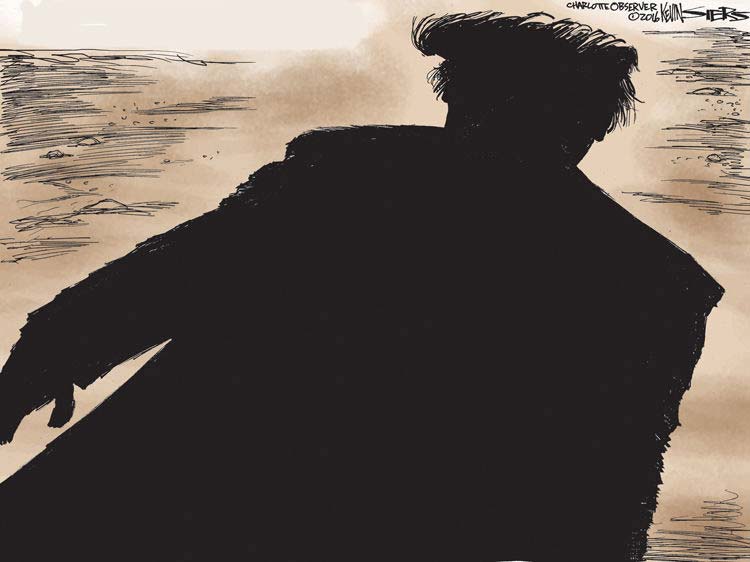 ARLINGTON, Va. -- The breakfasters at Bob and Edith's Diner are too preoccupied with their tasty bacon and eggs to notice the Democratic gubernatorial candidate.

Or perhaps, like all Americans who are more sensitive than oysters, they are in the throes of political exhaustion and are trying to ignore this year's only competitive gubernatorial race.

In any case, they seem unaware that the mild-mannered pediatric neurologist in one of the booths -- he is wearing a bourgeois disguise: gray suit, maroon tie -- supposedly is "fighting for the violent MS-13 killer gangs" involving many Central American immigrants.

The U.S. president says so, as does the gubernatorial candidate of his party. In two weeks, Virginia will have America's most consequential election since 50 weeks ago. Then, this became the only Southern state Hillary Clinton carried (by 5 points). Today's campaign dramatizes the difficult calculation confronting people who want the Republican Party restored as a vehicle for conservatism but who know that this requires expunging the political style -- exuberantly fact-free accusations and screeds -- exemplified by the "MS-13" tweet.

Lt. Gov. Ralph Northam won the Democratic nomination by handily defeating (by 10 points) a darling of the Bernie Sanders/Elizabeth Warren (both endorsed the darling) tendency in the Democratic primary, which attracted 177,000 more voters than the Republican primary did.

Now, however, Northam is benefiting from his opponent's intractable dilemma, that of all Republicans who remember life before 2016 and want to do what they are told cannot be done: Turn the clock back. Virginia's incumbent Democratic governor, Terry McAuliffe, is popular. Virginia is purple trending blue: Democrats have carried it in three consecutive presidential races, they have won three of the last four gubernatorial contests and both U.S. senators are Democrats. Barack Obama has campaigned to energize African-American voters. And the Republican candidate, Ed Gillespie, has a problem residing across the Potomac.

These attributes are, in the incandescent eyes of his party's now-Trumpian base, defects of swamp creatures. So, he is gingerly tiptoeing across the treacherous terrain of Trumpian Republican politics. This involves stoking the anger of those people who seem happiest when furious, but without infuriating everyone else.

He did the former with dishonest MS-13 ads featuring tattooed dark-skinned men ("Kill, rape, control.") and accusing Northam of refusing to crack down on "sanctuary cities," of which Virginia has none. Gillespie's admirers say he is better than he sounds. Others, remembering Mark Twain (who popularized the quip "Wagner's music is better than it sounds"), say that in democratic politics -- the politics of persuasive rhetoric -- a candidate is the way he chooses to sound.

Recently, however, Gillespie has been stressing economic issues while Northam has been saturating liberal Northern Virginia with ads featuring women who are cross because Gillespie is pro-life. Never mind that governors have been almost irrelevant to abortion policy since courts took control of it two generations ago.

Perhaps Northam's ads are intended to enkindle progressives, but that should be done by the president's daily reminders of his existence. If Gillespie enlists Trump to campaign for him, he will thereby embrace a political style that entails a political substance (e.g., harping on MS-13) suited to it. If he does not, Trump's supporters will notice and accuse him of having standards, yet another swampish vice -- the stigmata of elitism.

A Gillespie win on Nov. 7 would be a double victory for Republicans. They would control another swing-state's governor's mansion in 2020. And it might send the Sanders/Warren true believers careening off on a "We told you so!" rampage, arguing -- convincingly only to other believers -- that Virginians chose a conservative Republican because Northam, although progressive, was insufficiently so. Then they could continue making "single-payer" (government-dispensed) health care progressivism's central promise to a nation in which 157 million people happily get their health care plans from their employers.

So, if Gillespie wins, Republicans elsewhere will conclude that the derangement of their party does not hinder its prospering. If the Democrat wins, many progressives will be secretly as unhappy as the Trumpians who, like those progressives, will argue that their man lost because he was inconsistently and insincerely enthusiastic about his party's most off-putting faction.