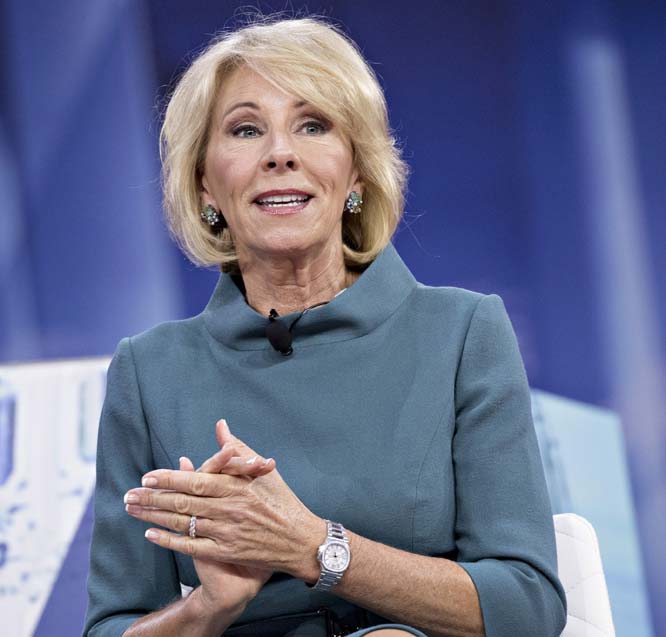 The assault on civil rights that was mandated by the civil rights division of Barack Obama's Education Department might soon abate. Current Education Secretary Betsy DeVos is moving to halt the life-shattering procedures that began in 2011, when the department sent to colleges and universities a "dear colleague" letter: To avoid costly and reputation-damaging investigations, and perhaps the loss of federal funds, institutions must embrace the department's new interpretation of a then-39-year-old provision of federal law that said merely that no person at an institution receiving federal funds shall be subjected to discrimination on the basis of sex.

From this, the department began micromanaging institutions' disciplinary practices in ways that traduce constitutional guarantees.

For seven years, men accused of sexual assault, a category elastic enough to encompass "broad ranges of behavior" (read on), have been convicted, sometimes expelled, their futures blighted. Sometimes justice has been done, but injustices have been perpetrated by improvised campus tribunals orchestrated by administrators with vocational incentives to discover offenses that justify their offices.

The "guidance" has mandated convictions on the basis of a mere "preponderance of the evidence" -- 51 percent suffices -- not "clear and convincing" proof, let alone proof beyond a reasonable doubt. The guidance strongly discouraged allowing the accused (almost always males) to cross-examine their accusers, who frequently are identified in proceedings as survivors -- note the prejudgment. Accusers could appeal acquittals, exposing the accused to double jeopardy.

DeVos' improvements, still being formulated, should reflect this fact: Heather Mac Donald, in "The Diversity Delusion: How Race and Gender Pandering Corrupt the University and Undermine our Culture," notes that "as of early 2018, 79 judges had issued rulings against schools' rape trial procedures" adopted in conformity with the Obama administration's dictates. Tellingly, they did not pressure institutions to immediately involve professionals from the criminal justice system in investigating sexual assaults. Mac Donald suggests why:

She says that a 2006 University of Virginia survey found "that only 23 percent of the subjects whom the survey characterized as rape victims felt that they had been raped," a figure that the university's director of Sexual and Domestic Violence Services called "discouraging." Stanford reported 33 rapes in 2016, a horrifying number -- except, Mac Donald notes, that "in none of those cases was there an arrest, even though the alleged rapist was almost certainly known to the accuser."

"Believing in the campus rape epidemic," writes Mac Donald, "depends on ignoring women's own interpretations of their experiences -- supposedly the most grievous sin in the feminist political code." The "epidemic" paradigm derived from a study purporting to document that 20 percent of women will suffer sexual assault during four years on a campus.

If so, the 300,000 to 400,000 assaults would make campuses astonishingly dangerous places. Nevertheless, some insist that because the campus "rape culture" condones violence against women, underreporting of campus rapes is actually proof of the epidemic -- hundreds of thousands of victims suffer in silence.

The two most publicized campus rapes that supposedly proved the existence of a campus rape culture were of a stripper by Duke lacrosse players and of a University of Virginia woman in a fraternity. Neither happened.

Mac Donald notes that campus sexual-assault policies often assign "wildly asymmetrical responsibilities and liabilities." In campuses' alcohol-saturated hookup culture, men are assigned the Victorian role as guardians of frail females' virtue: If he and she are drunk, she typically is absolved of agency and he is accountable for both of their behaviors. Yet, contradictorily, a core tenet of academic progressivism is that the differences between men and women are not innate, they are "socially constructed," having nothing to do with biology. Never mind various cultures' centuries of experience with laws and courtship rituals developed to tame the male libido.

As DeVos revises her department's guidance, she should consult Brooklyn College law professor KC Johnson's analysis of Yale's just-released report on the sexual dangers on its campus: The 1.75 percent of undergraduate females assaulted in the first half of 2018 is, if accurate, appalling. It also is a violent crime rate nearly as high as in Detroit, which the FBI rates America's most dangerous city.

The report provides no details of 18 of the 50 victims because the allegations came from a third party and the accuser did not pursue the matter. Only five of the other 32 cases went before Yale's adjudication panel.

The report says Yale "uses a more expansive definition of sexual assault" than does Connecticut or federal law -- Yale's definition encompasses "broad ranges of behavior" -- but does not say why.