Into a new void? 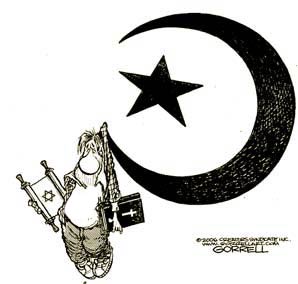 This far into the human story, only the historically uninstructed are startled by what they think are new permutations of evil. So, when Russia sliced Crimea off Ukraine, Secretary of State John F. Kerry was nonplussed: "You just don't in the 21st century behave in 19th-century fashion by invading another country on completely trumped up pretext." If, however, Vladimir Putin is out of step with the march of progress, where exactly on history's inevitably ascending path (as progressives like Kerry evidently think) does Kerry, our innocent abroad, locate the Islamic State?

The Islamic State uses crucifixions to express piety and decapitations to encourage cooperation. These are some of the "folks" — to adopt the locution Barack Obama frequently uses to express his all-encompassing diffidence — Obama was referring to when talking to the New York Times' Thomas Friedman. "That's exactly right," Obama said when Friedman suggested that Obama believes all Middle East factions must agree to a politics of "no victor, no vanquished." It will be interesting watching Obama try to convince the crucifiers and the crucified to split their differences.

Exactly 70 years ago, the United States grappled with a humanitarian dilemma. On Aug. 9, 1944, A. Leon Kubowitzki of the World Jewish Congress wrote to Assistant Secretary of War John J. McCloy, quoting a Czech official's opinion that the "destruction of gas chambers and crematoria in Oswiecim [Auschwitz] by bombing would have a certain effect now." On Aug. 14, McCloy rejected the request, noting that it would require "the diversion of considerable air support essential to the success of our forces now engaged in decisive operations elsewhere," a defensible argument. But then McCloy added that such bombing "might provoke even more vindictive action by the Germans." That is, bombing an extermination camp might make the operators of the crematoria really cross.

In 1988, President Ronald Reagan signed implementation legislation for the Genocide Convention, the parties to which agreed to "undertake to prevent and to punish" the kind of crimes the Islamic State vows to commit. Sen. Dianne Feinstein (D-Calif.) today says, "It takes an army to defeat an army." Is she, too, so very 19th century? Obama seems to agree with her, telling Friedman, "We can run [the Islamic State] off for a certain period of time, but as soon as our planes are gone, they're coming right back in." So air power is insufficient. He also said, "We're not going to let them create some caliphate through Syria and Iraq, but we can only do that if we know that we've got partners on the ground who are capable of filling the void." We will not "let" something happen — unless air power alone cannot prevent it and no "partners" fill the void beneath our bombers. About that void:

The United States has fought its longest war — more than three times longer than U.S. involvement in World War II — lest Afghanistan become a state unable or unwilling to prevent terrorists operating with impunity in a substantial area. Since this war began, U.S. policies have created two such voids by shattering two states, those of Iraq and Libya.

Friedman reports that Obama says his regret about Libya is not that he waged an utterly optional war of regime change. Rather, Obama regrets not getting busy "on the ground" to "manage" Libya's transition to democracy. So, even after 13 years in Afghanistan and nearly a decade in Iraq, Obama wishes the United States had gone into Libya for more of the excitements and satisfactions of nation-building.

Two questions must be distinguished. First, is it an important U.S. interest or duty to protect, as much as air power can, Kurds and Yazidis from the Islamic State, and to (in Obama's words) "push back" (back to where?) this group? Even if the answer is yes, there is another question: Is it wise to support the use of force by this president? He is properly cautious about today's awful dilemma, which is not primarily of his making. But caution can be reckless.

One of Napoleon's aphorisms — "If you start to take Vienna, take Vienna" — means: In military matters, tentativeness is ruinous. Are F-18s going to be used for a foreign policy of rightminded gestures — remember#BringBackOurGirls? — the success of which is in making the gesturers feel virtuous? "Success," said T.S. Eliot, "is relative: It is what we can make of the mess we have made of things." There is much material — rubble, actually — to work with as we seek success.