The sequence to success 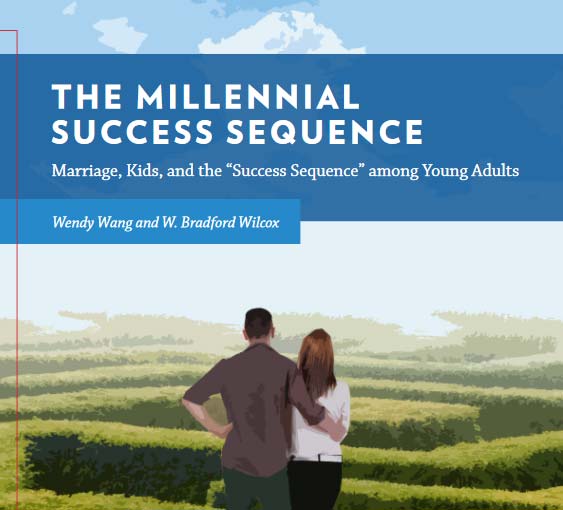 The Bronx, the only one of New York City's five boroughs that is on the American mainland, once had a sociological as well as geographical distinction.

In the 1930s it was called, as Daniel Patrick Moynihan noted, "the city without a slum." It was "the one place in the whole of the nation where commercial housing was built during the Great Depression."

In the third quarter of the 20th century, however, there came, particularly in the South Bronx, social regression that Moynihan described as "an Armageddonic collapse that I do not believe has its equal in the history of urbanization."

Of the several causes of descent, there and elsewhere, into the intergenerational transmission of poverty, one was paramount: family disintegration. Some causes of this remain unclear, but something now seems indisputable: Among today's young adults, the "success sequence" is insurance against poverty.

The evidence is in "The Millennial Success Sequence" published by the American Enterprise Institute and the Institute for Family Studies and written by Wendy Wang of the IFS and W. Bradford Wilcox of the University of Virginia and AEI.

The success sequence, previously suggested in research by, among others, Ron Haskins and Isabel Sawhill of the Brookings Institution, is this: First get at least a high school diploma, then get a job, then get married, and only then have children. Wang and Wilcox, focusing on millennials ages 28 to 34, the oldest members of the nation's largest generation, have found that only 3 percent who follow this sequence are poor.

A comparably stunning 55 percent of this age cohort have had children before marriage. Only 25 percent of the youngest baby boomers (those born between 1957 and 1964) did that. Eighty-six percent of the Wang-Wilcox millennials who put "marriage before the baby carriage" have family incomes in the middle or top third of incomes. Forty-seven percent who did not follow the sequence are in the bottom third.

One problem today, Wilcox says, is the "soul-mate model of marriage," a self-centered approach that regards marriage primarily as an opportunity for personal growth and fulfillment rather than as a way to form a family.

And as AEI social scientist Charles Murray says, too many of the successful classes, who followed the success sequence, do not preach what they practice, preferring "ecumenical niceness" to being judgmental.

In healthy societies, basic values and social arrangements are not much thought about. They are "of course" matters expressing what sociologists call a society's "world-taken-for-granted." They have, however, changed since President Lyndon Johnson proclaimed "unconditional" war on poverty.

This word suggested a fallacious assumption: Poverty persisted only because of hitherto weak government resolve regarding the essence of war -- marshalling material resources.

But what if large causes of poverty are not matters of material distribution but are behavioral -- bad choices and the cultures that produce them? If so, policymakers must rethink their confidence in social salvation through economic abundance.

Success is, of course, more complex than adherence to the sequence. Much cultural capital often is unavailable to poor people. In J.D. Vance's "Hillbilly Elegy," his memoir of his rise from Appalachian poverty to Yale Law School, he recounts his experience in the recruiting process with prestigious law firms, during which he learned, among many other things he did not learn at home, "use the fat spoon for soup" and "your shoes and belt should match."

These may seem trivial matters; to upward mobility, they are not.

Much more important, however, is the success sequence. In Nathaniel Hawthorne's day, as in ours, it was said that problems were so daunting that old principles must yield to new realities. Perhaps, however, unfortunate new realities are the result of the disregard of old principles. Hawthorne recommended consulting "respectable old blockheads" who had "a death-grip on one or two ideas which had not come into vogue since yesterday morning."

Ideas like getting an education, a job and a spouse before begetting children.