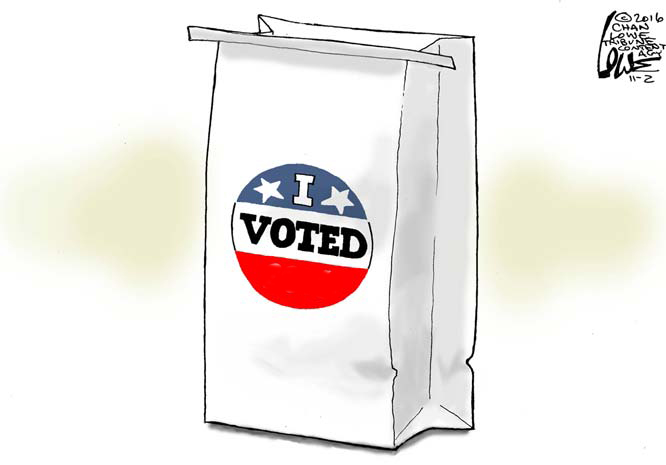 The progressive catechism teaches that there is "too much money" in politics. A codicil to this tenet, written in fine print, is that the term "money" does not apply to money from George Soros, government employees unions, private-sector unions, trial lawyers, Democratic-oriented private-equity firms and white-shoe law firms, Silicon Valley executives or entertainment celebrities.

The catechism does not include the truism that the way to reduce the amount of money in politics is to reduce the amount of politics in the allocation of money and of opportunities for making it. This would eviscerate the progressive agenda, which involves government, aka politics, redistributing wealth, regulating the creation of it, and rescuing "fairness" from "market failure," aka markets producing results that progressives dislike.

Now comes a strange proposal from one of the stranger Democratic presidential campaigns, that of New York Sen. Kirsten Gillibrand.

As a congresswoman representing a moderate upstate district, she earned a 100% score from the NRA. She supported repeal of the District of Columbia's gun restrictions and said she kept two rifles under her bed. She also opposed driver's licenses for illegal immigrants, and was a member of the Blue Dog Coalition of occasionally conservative Democrats.

When, however, in 2009 she was appointed to the Senate to replace Secretary of State Hillary Clinton, Gillibrand discovered her inner progressive, even opposing repeal of D.C.'s gun-control regime.

Arriving in the Senate, Gillibrand decided (as the most recent Democratic president did, and as six other Democratic senators have done this year) that she should take her talents 16 blocks west on Pennsylvania Avenue. Seeking a lane of her own in the Democrats' congested nomination scramble, her signature (because her only major) proposal is to purify politics using "democracy dollars."

Every eligible voter could get these just by asking the government for up to 600 of them. For each federal race, the Federal Election Commission would provide $200 worth of vouchers that voters could contribute to House, Senate and presidential candidates, $100 in primaries and $100 in general elections. Voters could donate only to House and Senate races in their states.

All campaign-finance laws are written by incumbent legislators, so they usually serve incumbent-protection. Gillibrand's proposal would require candidates accepting "democracy dollars" to accept no contributions larger than $200, a boon to incumbents who usually are better known than their challengers and have more ways of generating free media coverage.

"Democracy dollar" vouchers will be paid for by -- wait for it -- taxing the rich. Gillibrand wants to take more than $60 billion over 10 years from CEOs who make "excessive" salaries, defined as more than 25 times the median salary of their employees, or more than $1 million, whichever is less.

Writing in the Washington Examiner, Luke Wachob of the Institute for Free Speech calculates that if even 20 percent of the 137.5 million who voted in 2016 had used Gillibrand's vouchers, taxpayers would have given federal candidates more than $16 billion. Such candidates spent a total of $2.7 billion in the 2015-2016 cycle, amid lamentations about "too much money" in politics.

It is difficult to electrify the electorate by talking about the political process: How often do people at your coffee shop discuss "soft" and "hard" campaign money? Perhaps Gillibrand is talking about the process because her Democratic rivals have beaten her to the punch in promising voters oodles of free stuff.

Voters, however, have repeatedly demonstrated opposition to politicians' proposals for funneling money to politicians. Indeed, this might be America's most frequently and reliably "polled" policy:

Since 1976 there has been the Presidential Election Campaign Fund. Every year, taxpayers can, by checking a box on their tax return, contribute ($1 until 1993, $3 since then) to the fund -- without increasing their tax liability. Participation peaked in 1980, when 28.7% of taxpayers checked the box.

By 2018, participation had withered to 3.9% (i.e., 96.1% "voting" against it with their pencils). John McCain in 2008 was the last major party candidate to accept taxpayer funding (and consequent spending limits).

The richest Americans can contribute only $5,600 to a candidate's campaigns ($2,800 in a primary, $2,800 in the general election). Large contributions to issue-advocacy PACs would be unaffected by Gillibrand's proposal.

Still, she says "democracy dollars" will combat "corruption," meaning the corruption of others less admirable than she: Gillibrand does not say that she has been corrupted by any of the $58,508,025.68 she has received in contributions during her career.