'Heartbeat bills' are wholesome provocations in the abortion debate 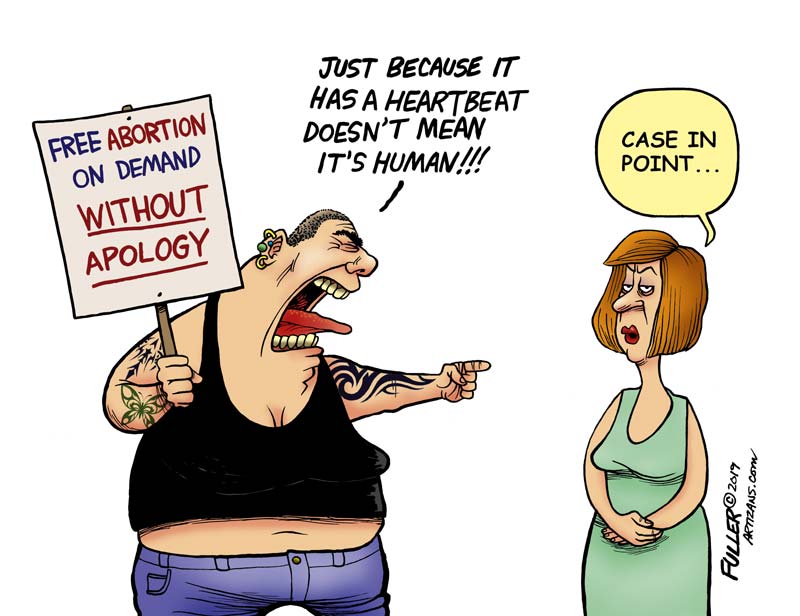 While constitutional lawyers, ethicists and theologians -- in descending order of importance in the abortion debate -- have been arguing in the 46 years since the Supreme Court attempted to settle the debate, some technologists have been making a consequential contribution to it.

They have developed machines that produce increasingly vivid sonograms of fetal development. This concreteness partially explains the intensification of the debate.

Six states have passed "heartbeat bills" to ban abortions after a fetal heartbeat is detectable, approximately six weeks after conception. Such bills are, indeed, unconstitutional given the court's Roe ukase that abortion cannot be restricted before a fetus is viable outside the womb -- which means, presumably, before the fetus is a child.

But why should "viability" be the dispositive criterion? Viable means capable of surviving outside the womb, which no infant can do without constant help that others must give. Must. No infants are "viable" in that all are helpless, and the law requires that help be given by those responsible for the infant.

A New York Times editorial (Dec. 28, 2018) opposing the idea that "a fetus in the womb has the same rights as a fully formed person" spoke of these living fetuses -- that they are living is an elementary biological fact, not an abstruse theological deduction -- as "clusters of cells that have not yet developed into viable human beings." Now, delete the obfuscating and constitutionally irrelevant adjective "viable," and look at a sonogram of a ten-week fetus.

Note the eyes and lips, the moving fingers and, yes, the beating heart. Is this most suitably described as a "cluster of cells" or as a baby? The cluster-of-cells contingent resembles Chico Marx in the movie "Duck Soup": "Who ya gonna believe, me or your own eyes?"

The "heartbeat bills" are wholesome provocations: One of their aims is to provoke thinking about the moral dimension of extinguishing a being with a visibly beating heart. Furthermore, pro-life people are being provoked in different ways.

Last month, Kansas' Supreme Court found in this from the state constitution -- "All men are possessed of equal and inalienable natural rights, among which are life, liberty, and the pursuit of happiness" -- a reason to overturn the state's ban on D&E (dilation-and-evacuation) abortions that involve dismemberment of the living fetus. In February, after Illinois Gov. J.B. Pritzker signed an executive order to enforce taxpayer-funded abortions, Democratic legislators decided that not even that was enough. They introduced a bill to create a right to abortion for any reason at any point in a pregnancy, a bill similar to legislation enacted or advancing in other Democratic-controlled states.

In February, all but three Democratic U.S. senators opposed, thereby killing, Nebraska Sen. Ben Sasse's Born-Alive Abortion Survivors Protection Act that would have required, in the rare cases in which a child survives a botched abortion procedure, that the survivor receive the standard professional care that would be given to any child born alive at the same gestational age.

The 1850s debates that propelled Abraham Lincoln to greatness concerned not whether slavery should be abolished forthwith, which was neither a constitutional nor political possibility. Rather, the debates concerned two other questions: Would national policy stigmatize slavery as a tragic legacy and a moral wrong? And: Would policy confine slavery to its existing dominion by banning it from the territories, thereby, Lincoln thought, putting it on a path to ultimate extinction?

Temperate pro-life advocates, practicing Lincolnian prudence, consider the abortion debate akin to the slavery debates for three reasons: Abortion shrinks the scope of the concept of personhood. The issue has been inflamed by judicial fiat (Roe v. Wade as Dred Scott v. Sandford). And confining a morally objectionable practice is a worthy, albeit not fully satisfying, objective.

The changed composition of the Supreme Court, and the supposed imminent danger that Roe will be overturned, is the excuse that pro-abortion extremists have seized upon to do what they want to do anyway: to normalize extreme abortion practices expressive of the belief that never does fetal life have more moral significance than a tumor in a mother's stomach. (Most European nations restrict abortions by at least week 13.

France and Germany are very restrictive after 12, Sweden after 18.) The court's new composition has encouraged some pro-life advocates in their maximum hope, that Roe can be overturned, which would not proscribe abortion but would restore its pre-1973 status as a practice states can regulate. This is not a foreseeable possibility; a more nuanced abortion regime is.