Trump's contribution to the public good 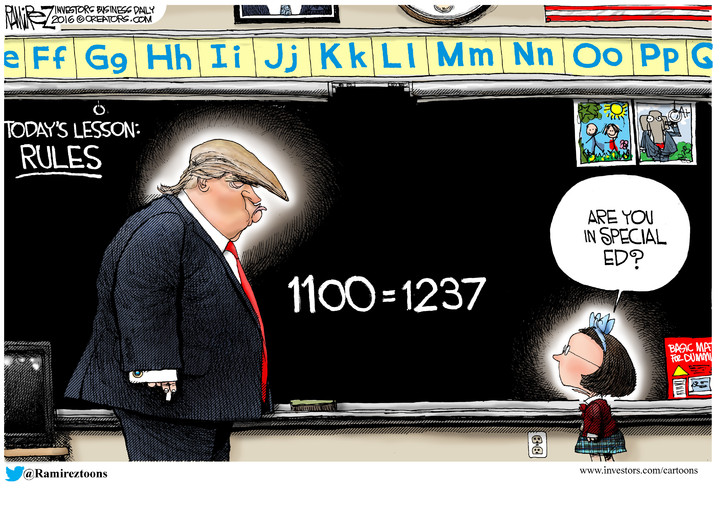 “One fine day, in a fit of euphoria, after he had picked up the telephone and taken an order for zero-coupon bonds that had brought him a $50,000 commission, just like that, this very phrase had bubbled up into his brain. On Wall Street he and a few others — how many? — three hundred, four hundred, five hundred? — had become precisely that . . . Masters of the Universe.”

— “The Bonfire of the Vanities,” Tom Wolfe

Donald Trump, a man about town in Manhattan, doubtless fancies himself a Master of the Universe. He is, however, no match for folks who have run rings around his ramshackle campaign in Colorado Springs and Casper, Wyo.

They met to select, by settled rules comprehensible to all who can read, delegates to the Republican National Convention. They selected so many sympathetic to Ted Cruz that Trump has declared the system in both states, and wherever else the diligent are defeating the dilettante, to be “rigged, disgusting, dirty.” Actually, he is having the novel experience of competing in systems that are not rigged.

Voters can only surmise what Trump is hiding by refusing to release his tax returns and can only guess how much he is exaggerating his wealth, or how much he has made from the money his father gave him. (To the question, “When you publicly state what you’re worth, what do you base that number on?,” he replied: “I would say it’s my general attitude at the time that the question may be asked.”) Voters know, however, his repeated boasts that he has prospered in the New York City real estate business, a petri dish of crony capitalism, by making lavish payments to political decision-makers:

“I give to everybody. When they call, I give. And you know what? When I need something from them, two years later, three years later, I call them. They are there for me.” And: “As a businessman and a very substantial donor to very important people, when you give, they do whatever the hell you want them to do.” And: “I’ve got to give to them, because when I want something, I get it. When I call, they kiss my ass.”

No wonder Trump, in his New York City parochialism, considers grass-roots politics in Colorado and Wyoming (and Louisiana, South Carolina and elsewhere) mysterious and sinister. His rule-or-ruin approach to the GOP, which this real estate operator is treating like a short-lease rental property, is attempting to de-legitimize any process in which he does not win.

He is theatrically enraged by two things he finds inexplicable and illegitimate — the spirit of federalism and the wisdom of “The Federalist Papers.” He is offended that states have the right to have different delegate-selection processes. And he is scandalized that some states have chosen processes that establish what the authors of “The Federalist Papers,” and the Constitution’s framers, recommended — indirect democracy (the framers wanted only House members directly elected) that tempers opinion by filtering it through multiple layers of deliberation. Complex delegate-selection processes test candidates’ abilities that are pertinent to governing, including skillful staffing and an aptitude for long-term planning.

Trump’s campaign to discredit the GOP would benefit from any attempts, whatever their motivations or consequences, to rewrite convention rules now, in the middle of a process that all participants began on the assumption that this year’s rules were settled.

Next year, however, when this year’s competition is, like Trump, just a fragrant memory, state parties that have open primaries should rethink this practice. It makes parties susceptible to free-floating voters and freebooting candidates who are, like Trump, lightly — if at all — invested in the party’s historic mission and its future.

Open primaries are not unconstitutional but they are discordant with a First Amendment value — the freedom of the individual to associate with like-minded persons in political parties to advance a particular political doctrine.

Reformers are apt to revive familiar proposals for making the nomination process tidier by instituting four or five rotating (in their places on the nominating calendar) regional primaries. Leave aside the question of whether tidiness, an essentially aesthetic value, is a sensible political goal for a complex continental nation.

But this arrangement, which this year might have quickly nominated Trump, or any future reform must be evaluated in terms of how it would facilitate or impede future Trumps. Measures to prevent candidacies like his could be his contribution — inadvertent, of course — to the public good.