Cruz is aiming at the wrong Republicans 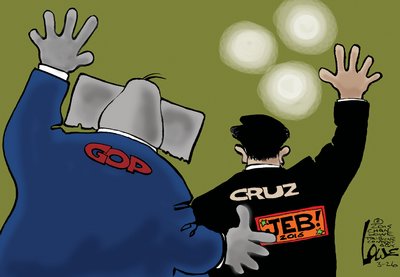 Texas Sen. Ted Cruz was born in 1970, six years after events refuted a theory on which he is wagering his candidacy. The 1964 theory was that many millions of conservatives abstained from voting because the GOP did not nominate sufficiently deep-dyed conservatives. So if in 1964 the party would choose someone like Arizona Sen. Barry Goldwater, hitherto dormant conservatives would join the electorate in numbers sufficient for victory.

The sensible reason for nominating Goldwater was not because he could win: As Goldwater understood, Americans still recovering from the Kennedy assassination were not going to have a third president in 14 months. The realistic reason was to turn the GOP into a conservative weapon for a future assault on the ramparts of power.

Hence in September 1964,William F. Buckley told an audience of young conservatives to anticipate Goldwater's defeat because he had been nominated "before we had time properly to prepare the ground." The candidacy had, however, planted "seeds of hope, which will flower on a great November day in the future." Sixteen Novembers later, they did.

Today, however, there is no need to nominate Cruz in order to make the GOP conservative. Cruz sits in a Senate that has no Republicans akin to the liberals Goldwater served with — New York's Jacob Javits, Massachusetts's Edward Brooke, Illinois's Charles Percy, New Jersey's Clifford Case, California's Thomas Kuchel. When Jeb Bush, the most conservative governor of a large state since Ronald Reagan (by some metrics — taxes, school choice — Bush was a more conservative governor than Reagan), is called a threat to conservatism, Republicans are with Alice in Wonderland.

By disdaining "the mushy middle," Cruz evidently assumes that the electorate's middle — lightly partisan and only mildly ideological — is too minuscule to matter. But even if it were small, all cohorts count when in only three of the past six elections has the winner received a majority of the popular vote — and the highest percentage was Barack Obama's 52.9 in 2008.

Announcing his candidacy with characteristic fluency before the Christian students and faculty of Liberty University, Cruz noted that "roughly half of born-again Christians aren't voting" and imagined "millions" of such voters surging into the electorate. Cruz, like Shakespeare's Glendower ("I can call spirits from the vasty deep"), hopes his rhetorical powers can substantially change the composition of the Republican nominating electorate. Skeptics of Cruz's summoning respond like Hotspur: "But will they come when you do call for them?"

Cruz, and all other Republican aspirants, must be measured against Pennsylvania. It is one of the 18 states that have voted Democratic in six consecutive elections and that, with the District of Columbia, total 242 electoral votes, and Pennsylvania was redder in 2012 than in 2008. Which Republican is most apt to flip Pennsylvania by accumulating large majorities in Philadelphia's suburbs?

Any candidacy premised on conceding those 18 states involves a risky thread-the-needle path to not much more than 270 electoral votes. Writing in Politico, Democratic strategist Doug Sosnik notes that, in the six elections since 1992, a majority of states have not been "remotely competitive."

This is why, Sosnik says, "almost two-thirds of the $896 million spent on television" by the two candidates in 2012 was spent in five states that have been competitive since 1992 — Ohio, Colorado, Florida, Nevada and Virginia.

The Republican nominee must crack the ice that has frozen the electoral map. Cruz cannot do that by getting more votes from traditional Republican constituencies.