Before the voting begins, remember when government wasn't reviled 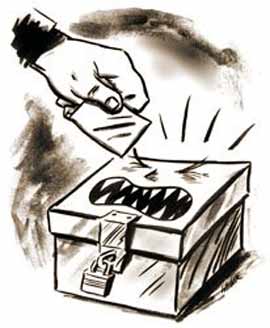 Soon, voters will have the opportunity and impertinence to insert themselves into the 2016 presidential conversation that thus far has been the preoccupation of journalists and other abnormal people. The voting will begin in Iowa, thanks to Marie Jahn.

When, after 38 years as recorder for Plymouth County in northwest Iowa, Jahn decided to retire in February 1975, local Democrats decided to throw her a party. When it came to attracting a speaker, the best they could entice from their party's national ranks was a former one-term governor of Georgia. According to Steven Hayward in "The Age of Reagan: The Fall of the Old Liberal Order":

"Carter's obscurity was confirmed when he appeared on the syndicated TV game show 'What's My Line?' He stumped the panel, which not only didn't recognize him, but failed to guess he was a state governor. When pollster George Gallup drew up a list of 38 potential Democratic presidential candidates in 1975, Carter's name was not on the list."

Eleven months after the fete for Jahn, Jimmy Carter finished second in the hitherto obscure Iowa caucuses, behind " uncommitted." This semi-triumph became his springboard to Olympus. The caucuses would never again be obscure. The moral of this cautionary tale is that voters can be startlingly disruptive.

Perhaps they are somewhat less likely to be so today. Surprises might be more difficult to spring now that there is saturation journalism about presidential campaigns that are in high gear a year before the first votes are cast.

But American politics often has had quirky aspects, as historian Morton Keller demonstrates in his "America's Three Regimes: A New Political History" (2007). The Republican Party, Keller says, became known as the Grand Old Party in the 1880s, when it was about 25 years young. In 1840, when William Henry Harrison, scion of wealthy Virginia planters, ran for president as the hardscrabble "log cabin and hard cider candidate," the resulting paraphernalia included glass log cabins containing whiskey from Pittsburgh's E.C. Booz distillery, which enriched American slang. The Era of Good Feelings, the decade after 1815, was, Keller says, more an Era of No Feelings: In the 1820 presidential election, Richmond's 12,000 residents produced 17 votes. Only 568 of Baltimore's 63,000 residents voted. Nine percent of those eligible in New Jersey voted.

No one will ever call 2016 part of an Era of Good Feelings. If, however, Donald Trump's vitriol pumps up the number of voters, this will at least lay to rest the canard that high voter turnout is a sign of social health.

Given the pandemic distaste for today's politics, it is consoling to remember that things change. In the late 19th century, Robert Ingersoll, a.k.a. "The Great Agnostic," was the nation's most outspoken atheist and a leading Republican, a combination unlikely today.

In the third decade of the 20th century, even a politician with national aspirations could be proudly parochial: The Democrats' 1928 presidential nominee, New York Gov. Al Smith, reportedly said he would rather be a lamppost on Park Row than the governor of California, and when asked his thoughts about the problems of states west of the Mississippi, he supposedly replied, "What are the states west of the Mississippi?" In 1952, the Democratic presidential nominee, Adlai Stevenson, dismayed by the mainstream media's conservatism, fretted about "a one-party press in a two-party country."

Today, there is a sense in which there are few two-party states. In the presidential election 40 years ago, Carter against President Gerald Ford, 20 states were won by five points or less, including the six most populous states: California, New York, Pennsylvania, Texas, Illinois, Ohio. (Note the absence of Florida, now the third-most populous state.) In 2012, just four states were decided by five points or less (North Carolina, Florida, Ohio, Virginia). Today, Larry J. Sabato, Kyle Kondik and Geoffrey Skelley of the University of Virginia's Center for Politics identify just seven states they consider "super-swingy": Colorado, Florida, Nevada, Ohio and Virginia, all of which voted for George W. Bush and Barack Obama twice, and Iowa and New Hampshire, which have voted Democratic in three of the past four elections.

But, again, things change. "One session of the Connecticut Legislature in the 1790s," Keller writes, "devoted itself primarily to imposing a tax on dogs. The next session was given over to discussing whether or not to remove that levy." This was, of course, long ago, before government became ambitious, caring and reviled.