The NEA is a government frill that should be shorn 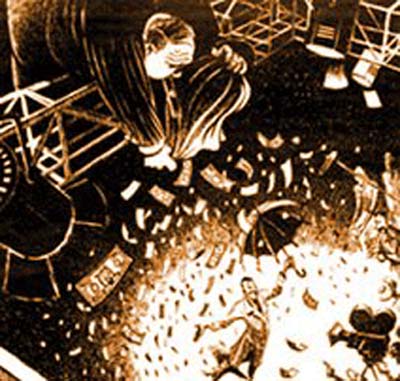 Although the National Endowment for the Arts' 2016 cost of $148 million was less than one-hundredth of 1 percent of the federal budget, attempting to abolish the NEA is a fight worth having, never mind the certain futility of the fight.

Let's pretend, counterfactually, that the NEA no longer funds the sort of rubbish that once immersed it in the culture wars, e.g., "Piss Christ" (a photo depicting a crucifix immersed in a jar of the artist's urine) and "Genital Wallpaper" (don't ask). What, however, is art? We subsidize soybean production, but at least we can say what soybeans are. Are NEA enthusiasts serene about government stipulating, as it must, art's public purposes that justify public funding? Or do they insist that public funds should be expended for no defined public purpose?

Government breeds advocacy groups that lobby it to do what it wants to do anyway -- expand what it is doing. The myriad entities with financial interests in preserving the NEA cloyingly call themselves the "arts community," a clever branding that other grasping factions should emulate, e.g., the "military-industrial community." The "arts community" has its pitter-patter down pat.

The rhetorical cotton candy -- sugary, jargon-clotted arts gush -- asserts that the arts nurture "civically valuable dispositions" and a sense of "community and connectedness." And, of course, "diversity" and "self-esteem." Americans supposedly suffer from a scarcity of both.

The NEA was created in 1965 as a filigree on the Great Society. In 1995, Republicans won control of the House of Representatives and said the NEA was a frill the federal government should be shorn of. Twenty-two years later, it survives, having mastered adaptive evolution, government-style: It defines art democratically and circularly. Art is anything done by anyone calling himself or herself an artist, and an artist is anyone who produces art.

As Walt Whitman neglected to say, "I hear America singing and everyone's singing is above average." Populist pandering is nothing new in Washington. Neither is this utilitarian calculus: Policies are good that provide the greatest self-esteem for the greatest number.

David Marcus, artistic director of a Brooklyn-based theater project and senior contributor to The Federalist, says the NEA produces "perverse market incentives" that explain why many arts institutions "are failing badly at reaching new audiences, and losing ground":

"Many theater companies, even the country's most 'successful,' get barely 50 percent of their revenue from ticket sales. Much of the rest comes from tax-deductible donations and direct government grants. This means that the real way to succeed as an arts organization is not to create a product that attracts new audiences, but to create a product that pleases those who dole out the free cash. The industry received more free money than it did a decade ago, and has fewer attendees."

Furthermore, the NEA's effects are regressive, funding programs that are, as Paul Ryan's House Budget Committee said, "generally enjoyed by people of higher income levels, making them a wealth transfer from poorer to wealthier." A frequently cited study purporting to prove otherwise was meretricious: It stressed income levels of ZIP codes where NEA-funded institutions are, inferring that institutions (BEG ITAL)located(END ITAL) in low-income areas are serving low-income people.

Defense contractors spread weapons systems' subcontracts across the nation like butter across toast; 50 states and perhaps all 435 congressional districts get NEA funds. And here is another reason for the immortality of government programs: If a program is a major expense, its spending generates so many dependent clients that legislators flinch from eliminating or even substantially trimming it. And if a program is, like the NEA, a minor expense, legislators wonder: Why take the trouble, and experience the pain (the NEA's affluent clients fluently articulate their grievances and sense of entitlement), for a trivial gain?

Americans' voluntary contributions to arts organizations ("arts/culture/humanities" institutions reaped $17 billion in 2015) dwarf the NEA's subventions, which would be replaced if those who actually use the organizations -- many of them supported by state and local government arts councils -- are as enthusiastic about them as they claim to be. The idea that the arts will wither away if the NEA goes away is risible. Distilled to its essence, the argument for the NEA is: Art is a Good Thing, therefore a government subsidy for it is a Good Deed.

To appreciate the non sequitur, substitute "macaroni and cheese" for "art."