Congress can take back power from the president. Here's how 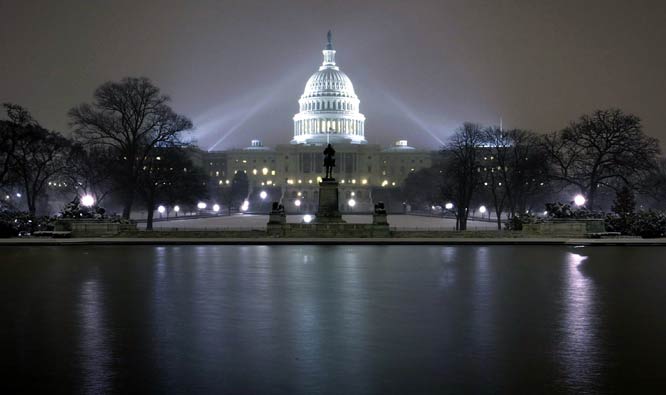 Lee is a constitutional, meaning an actual, conservative who is eager for Congress to retrieve some of the power it has improvidently, and sometimes unconstitutionally, delegated to presidents. As a step toward correcting Congress' self-marginalization, he proposes the Global Trade Accountability Act. It is analogous to the Regulations from the Executive in Need of Scrutiny (REINS) Act, which has several times passed the House only to expire in Democratic-controlled Senates.

REINS, which the House again passed Jan. 5, would require Congress to approve any major (at least $100 million cost) regulation. The theory is that if legislators' fingerprints, rather than just those of unaccountable and secure bureaucrats, are going to be on such regulations, they will receive more exacting cost-benefit analyses. REINS attempts to somewhat expand Congress' governing role as today's sprawling administrative state churns on: Lee notes that last year Congress passed 2,966 pages of laws while federal agencies were churning out 32-times that many (97,110) pages of regulations.

Lee's proposed act pertaining to tariffs is part of the Article I Project, a bicameral collaboration among legislators interested in resuscitating Congress' powers. It would "provide for congressional review of the imposition of duties and other trade measures by the executive branch." No such measures could take effect until both houses of Congress pass a joint resolution of approval.

Lee's excellent proposal would, like REINS, leave Congress in a reactive posture, but at least able to react. Speaker Paul Ryan declares that "we're" -- meaning Congress -- "not going to be raising tariffs," but Congress has long since invested presidents with vast discretion regarding tariffs.

Tariffs are taxes imposed at the border. The Constitution says "Congress shall have power to lay and collect taxes, duties, imposts and excises" and "to regulate commerce with foreign nations." Because the country came into existence insisting on "no taxation without representation," the initiative in raising revenue was entrusted to the political institution composed of directly elected representatives proportionate to population: The Constitution's Origination Clause says, "All bills for raising revenue shall originate in the House."

Although all tariffs raise revenues, not all are primarily "for" that purpose. Some are intended to protect from competition some industries that the government decides should be favored. So, by repeatedly over a century, beginning with the 1917 Trading with the Enemy Act (TWEA), delegating to presidents the power to impose tariffs, Congress has empowered him to raise taxes. Lee's proposal would require congressional complicity in this core government function.

Without it, presidents can wield powers akin to those of a wartime commander in chief. Gary Clyde Hufbauer of the Peterson Institute for International Economics notes that the TWEA is "the mother of all presidential powers over international trade." In 1933, newly inaugurated President Franklin Roosevelt's first act was to invoke a section of the TWEA -- never mind that the nation was not at war -- to declare a national emergency and order a bank holiday, actions which were, as Hufbauer says, "at best remotely related to foreign commerce." Congress promptly extended the TWEA to cover national emergencies declared by presidents.

In 1971, the "national emergency" invoked to justify President Richard Nixon's 10 percent surcharge on imports was the Korean War. It had never been declared and essentially had ended 18 years earlier, but the emergency that was declared when it began had never been formally ended.

Although the TWEA's opening language says it pertains "in time of war," the current president could use it with impunity to legitimize his imposition of tariffs, citing ongoing U.S. operations in Iraq and Afghanistan. The International Emergency Economic Powers Act of 1977, like the TWEA, and six other statutes give presidents vast power to regulate international commerce during an "unusual and extraordinary threat," which the current president thinks is the nation's current condition. And courts defer to presidents about emergencies.

Congress last passed a declaration of war many wars ago, on June 5, 1942, regarding Hungary, Romania and Bulgaria. Since then, Congress has explicitly authorized certain uses of military force, but its ability to inhibit presidential discretion regarding war-making has atrophied. If Congress passes Lee's measure, and Trump signs it, it will limit presidential discretion regarding trade wars and will crimp the modern presidency's imperial swagger.