The dog, the fracture and the 'palmists' 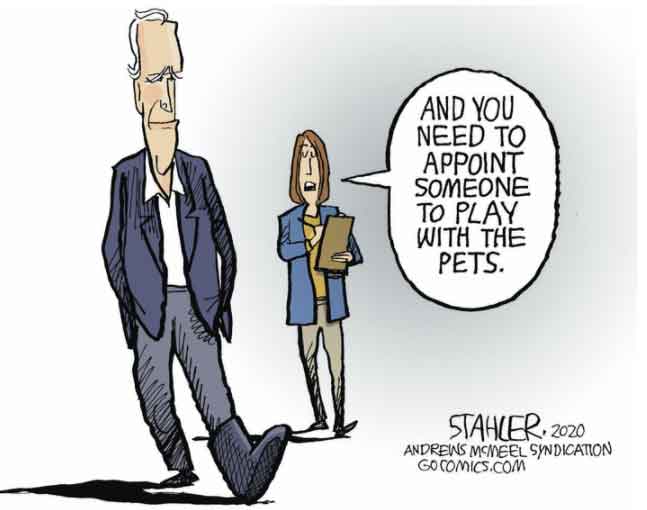 Whenever president-elect Joe Biden makes a rare public appearance and is out of the immediate control of his team it increases my suspicions that he is not physically, and above all mentally, up to the job he is about to take over.

Last week, Biden fractured his foot and now must wear a walking boot for several weeks while it heals. The Biden staff claims the fracture occurred while he played with his dog, Major. They also want us to know the German Shepherd is a rescue dog, which is a joke waiting to be told, full of irony. Who will 'rescue" Mr. Biden from himself?

The press pool was denied access and not allowed to take pictures of Biden after he visited an orthopedist and was given the boot (no pun intended). This caused even Andrea Mitchell on liberal MSNBC to complain that the Biden team wasn't being transparent about his injury. On Tuesday he finally allowed photographers to take pictures of his boot.

Contributing to the narrative that Biden is slipping (pun intended) was on display when he attempted to quote from the Bible. Biden, who self-describes as a practicing Roman Catholic, 'referred to the authors of Biblical Psalms as 'palmists.'" Twice. When President Trump quoted a passage of Scripture during a speech at Liberty University, the press widely mocked him for referring to 'two Corinthians" instead of 'Second Corinthians." It prompted a joke that began 'two Corinthians walk into a bar." There was no similar mocking of Biden for his 'palmists" mispronunciation.

This is no laughing matter. A president of the United States needs to be physically fit and mentally aware to address every challenge, especially those that might come from foreign governments.

Throughout the campaign Biden has engaged in numerous malapropisms, slurred words, mispronouncing words and misidentifying people (he called his wife his sister, after all) to raise serious concerns. Yes, George W. Bush and other presidents have, on occasion, stumbled over the English language, but this seems different. The website pjmedia.com has a list of 22 incidents and the list is not exhaustive.

There is nothing about this that should arouse partisanship. Past presidents have had health issues they and their staffs tried to hide from the public. Most notable was John F. Kennedy's back problems and his Addison's disease and the drugs to control his pain prescribed by his physician and withheld from the public.

However one voted in the recent election, none should wish any president ill. But if Biden does suffer from mental impairment and struggles as he does to articulate even the most basic thoughts, including an inability to put together sentences that make sense, even when reading a Teleprompter, this is â€“ or should be — cause for concern.

The major media, which have constantly lambasted President Trump for actions real and imagined must not apply a different standard to Mr. Biden, but likely will if recent softball questions asked of him are any indication. The greatest power of the media is the power to ignore and suppress information.

There are those who believe that Biden is only a placeholder for vice president-elect Kamala Harris, whom it is speculated many on the left would prefer as president. Refusing to be transparent about the president-elect's mental and physical health can only lend credence to that theory.