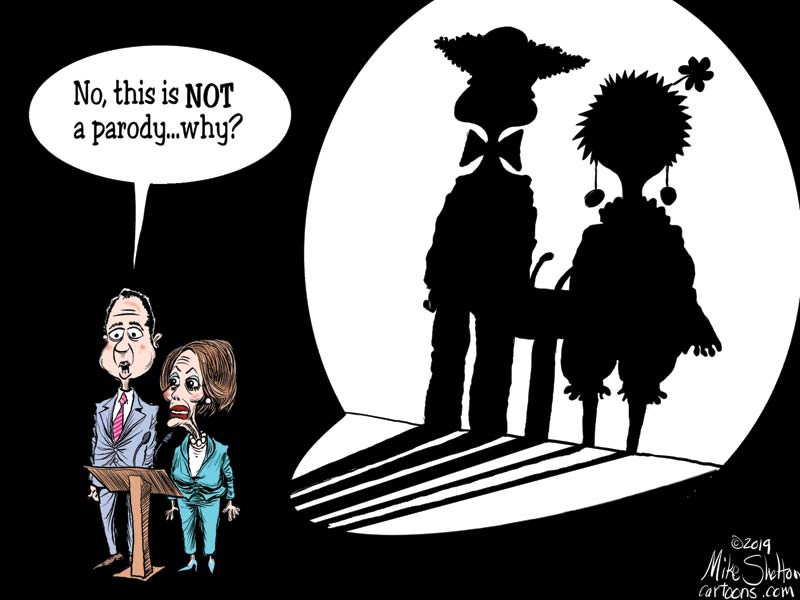 If you are paying attention to the circus that is the impeachment inquiry into handling of the much maligned call, this is what real collusion looks like: a media largely committed to advancing the goal of to severely damage or remove him from office, a series of at first private testimonies by people who appear to have similar motives and connections to and/or anti-Trump forces, and now a new book by "Anonymous," which claims the president has a bad attitude and is difficult to work with.

"Anonymous" is a self-admitted coward. He, or she, apparently still works within the administration. A true patriot would resign and go public so their accusations could be tested. Writing a book like this while still on the public payroll is more than cowardly, it is also an attempt to disregard, disrespect and dishonor the people who voted for .

Next comes the testimony starting Wednesday of carefully selected "witnesses" before Rep. "intelligence" committee (now there's a play on words). These testimonies are designed to advance the left's narrative about , but only the narrative that fits their agenda and not the one featuring a real quid pro quo involving then-Vice President and his overpaid son, who held a directorship with a energy company while his father was vice president and involved in policy on . At the time, the elder Biden urged to fire its top prosecutor, with the threat of withholding aid.

Having failed at other attempts to smear the president, this is the Democrat's last gasp. They must know that even if they draw up dubious articles of impeachment, the won't vote to convict and remove Trump from office. This could create one of the biggest political backfires in history if the public perceives it as unfair and driven by bias, ignoring evidence that would be to the president's benefit.

Take one example of many that unmask the objective of the anti-Trumpers, which has been obvious at least since the 2016 election.

The attorneys for the so-called "whistleblower," the person who heard from someone who listened to the call between and the president of , have numerous Twitter postings stating their intentions. Here are some of them taken directly from their tweets.

From : "#coup has started. First of many steps. #rebellion #impeachment will follow ultimately." This tweet was posted just after the president was sworn in and before he had done anything.

In the summer of 2017, Zaid tweeted "We will get rid of Trump" and "as one (coup) fails two more will take their place." He repeats these sentiments and objectives over many months. Zaid also predicted would be an ally in the pursuit of impeachment. Anyone examining that network's "reporting" can attest to the accuracy of his prediction.

The other attorney for the whistleblower, , also appears to be an anti-Trumper. He has tweeted that the president is "unable to discharge the powers and duties of his office. That's the standard (in) the 25th Amendment."

All of this is the stuff of show trials and banana republics. The left does not have a single issue on which they can defeat the president, most especially when it comes to the economy and the lowest unemployment in nearly 50 years, and as Trump claims, "the highest stock market ever."

If the public comes to see this as the partisan assault that it is and a power play to nullify the will of the voters who elected the president in 2016 -- assuming they pay attention during the coming holidays -- this could prove the greatest political disaster for them since lost 49 states to in 1984.

And they will deserve it.