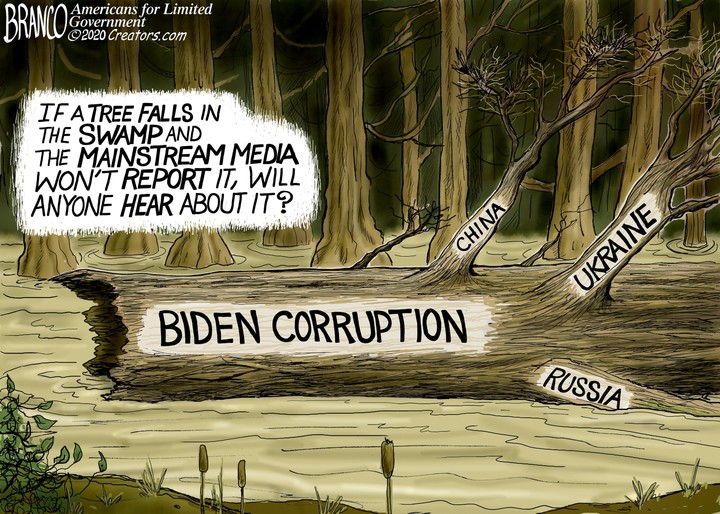 If Joe Biden survives recounts and several lawsuits filed by the Trump campaign into what Trump says has been widespread vote-counting fraud (we await proof), do not expect him to be hounded over his and Hunter Biden's business ties to China and Ukraine as President Trump has been over "Russian collusion" charges and numerous other attempts by Democrats, the left and the media to undermine his administration.

In an address to the nation last Saturday, President-Elect Biden claimed he has been given a "mandate for action on COVID, the economy, climate change (and) systemic racism." He called for healing and unity.

Biden reportedly plans to issue a slew of executive orders, reversing those by President Trump. It is his right to do so, but how does that promote healing and unity? For Democrats, healing and unity often means bowing to their policy wishes. It never seems to work in reverse.

Does Biden have a mandate on COVID? Would Americans, including businesses owners, accept a national lockdown that could cripple the economy? In a Hill-HarrisX survey conducted in July, 53 percent of registered voters approved of President Trump's job on economy, which, despite COVID, is recovering, "albeit unevenly."

A September Gallup poll found that 56 percent of registered voters believed they were better off under Trump than under the Obama-Biden administration.

What about open borders and lifting the ban on immigrants from nations that have experienced and, in some cases, promoted terrorism? Does Biden have a mandate for that? Will he be anti-Israel, as some believe Obama was? Will Biden undermine peace agreements brokered by Trump between Israel and three Arab/Muslim states? Was Trump's impeachment by Nancy Pelosi's House a contribution to healing and unity?

The Biden economic plan includes tax increases and more spending. Biden also said, "the purpose of our politics isn't total, unrelenting, unending warfare." You wouldn't know it from the way Democrats behave, starting with their slander of Robert Bork during his hearing to become a justice of the Supreme Court — ditto Brett Kavanaugh — through the presidential election of 2000, which many Democrats then and now claim illegitimately elected George W. Bush, to the 2016 election when they claimed Hillary Clinton should have won based on the popular vote and mounted a four-year political assault against the president.

Biden's bromides sound comforting, but Democrats do not practice what they preach.

"We may be opponents, but we are not enemies. We're Americans," he said. No credit to Abraham Lincoln. An earlier comment that we are not "red or blue states, but the United States" was taken from President Obama.

Speaking of Lincoln, who Democrats like to cite as a great Republican president, I am re-reading Carl Sandburg's brilliant four-volume work on Lincoln called "The War Years." Sandburg quotes some of Lincoln's many critics, including Democrats and the press at a time when the nation was even more divided.

After the 1860 election and before he was sworn in, the owner and editor of the New York Herald, James Gordon Bennett, called on Lincoln not to assume office: "A grand opportunity now exists for Lincoln to avert impending ruin, and invest his name with an immortality far more enduring that would attach to it by his elevation to the Presidency."

Trump critics planned to impeach him before he was inaugurated and publicly said so.

Biden says he wants to bring us together? On which issues would he be willing to compromise and find common ground with Republicans? To win the approval of Democrats and their media acolytes, Republicans must lose elections and forfeit their principles.


The mystery is why so many Americans vote for Republicans in one election and Democrats the next. Too many it seems vote mainly on personality and superficialities, not substantive policies.

It was the media's job to dig under the superficial and reveal the true Joe Biden (and Kamala Harris, who could likely become president sooner than later). They failed, becoming an extension of the Democratic Party and anti-Trumpers. If Biden's policies fail don't expect Democrats to admit it; they will blame Republicans.

Meanwhile we are a bipolar nation, unlikely to unify.