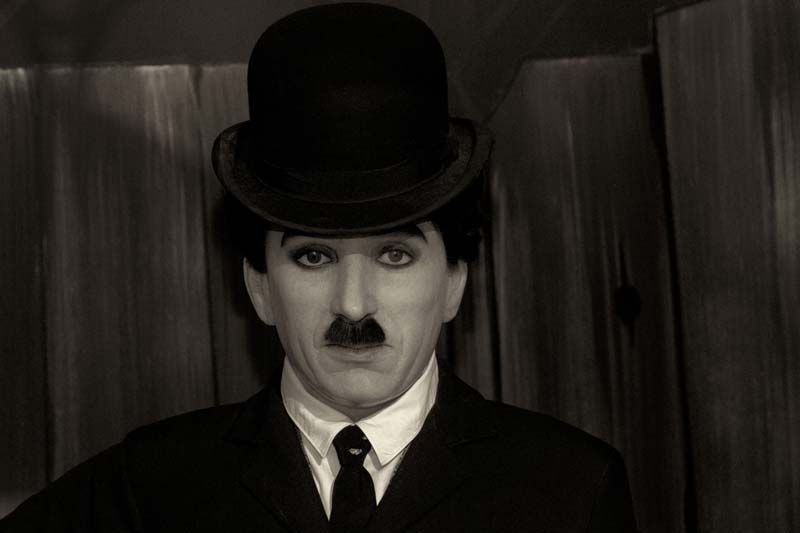 , the iconic actor and at the time a well-known political leftist (some said communist), delivered a speech in in 1941 prior to America's entry into World War II. As recounted in the biography of her parents, actress and screenwriter , quotes from a letter her father, who heard the speech, sent to her mother: "(Chaplin) plunged into a speech extolling the Russians -- their ideology (by saying that if communism produces men of such heroic stature, he'll take communism, etc.). He resented the organized efforts for the last 20 years to present Russians as ogres both here and in -- and by G od, if any man can't get along on $25,000 a year, he is a cockeyed liar and a traitor to his country."

According to the website celebritynetworth.com. "Chaplin had a net worth equal to $400 million dollars at the time of his death in 1977 (after adjusting for inflation)." Never mind.

At the latest Democratic presidential debate, millionaire and hedge fund billionaire had an exchange that came from a question about Sanders saying billionaires should be taxed out of existence to help close the "wealth gap."

Sanders responded by ticking off his familiar litany of misery -- half a million people living on the streets (he didn't mention that many are in cities and states run by ), the cost of education and student debt (he didn't mention the many options for receiving an education that would substantially reduce student debt), 87 million uninsured, or underinsured (wasn't Obamacare supposed to fix that?), adding, "you also have three people owning more wealth than the bottom half of American society."

Sanders called that a "moral outrage," though on his moral scale, abortion on demand is not a problem.

For his part, Steyer sought some moral cover for his wealth, agreeing with Sanders and adding that corporations have "bought this government for the last 40 years." Don't those four decades include the Clinton and Obama administrations? Steyer said he would undo every tax cut for rich people and wealthy corporations.

We've heard it all before. The Left would take from the prosperous and do what? Past welfare and redistribution programs haven't liberated the poor. If they had, there should be fewer poor people. Wasn't that the stated goal? Why didn't it happen? The reason is government is a bad charity.

What astounds is that younger people who buy into the "wealth gap" nonsense (because that is what they have had drummed into them by teachers and Democrat politicians) have little understanding of economics. There is no fixed amount of money from which all must draw. If there were it would be unfair for some to take (earn?) more than others. Wealth is a bottomless well. No one is destined to live permanently in the lower class.

The reason envy, greed and entitlement continue to surface in most election cycles is that it appeals to human emotions. Charging the rich with not paying their "fair share" in taxes is a distraction from the real issue: government spends too much.

In the letter to his wife, wrote, "The Charlie (Chaplin) you once knew has been buried with honors -- and a new one has been born. Let's hope the new one has everlasting life -- for he will cling to it as long as that political philosophy remains popular..."

Sanders and Steyer seem to believe the Chaplin philosophy remains popular among some voters. Don't include them, though, because they're rich and you won't see them sending a check to the .