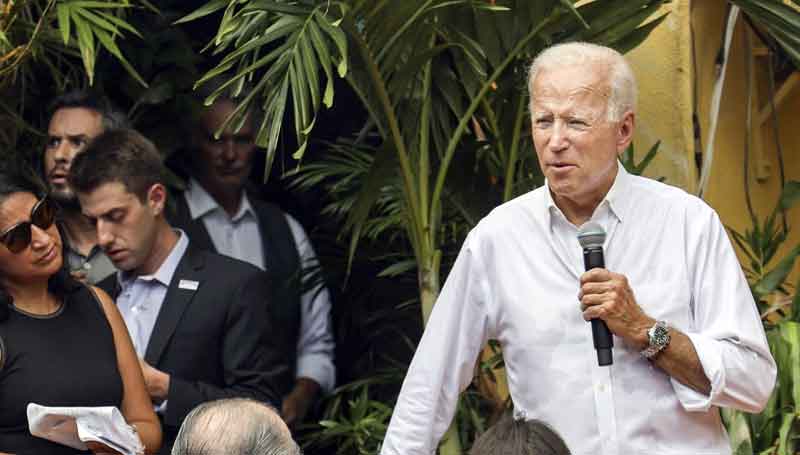 MIAMI — Hispanics are 60 percent of the population of Miami-Dade County, according to the U.S. Census. In the 2016 election, Hillary Clinton won Hispanic votes here by a margin of about 290,000, which was not enough to win the state for her. An NBC News/Marist poll last month showed President Trump with a 50 percent to 46 percent lead over Joe Biden among Florida Hispanics in the upcoming election. According to a recent Reuters/Ipsos opinion poll, Biden leads Trump by 12 points nationally among likely voters.

Esteban "Steve" Bovo is the Republican candidate for mayor of Miami. His heritage is Cuban-American. I asked Bovo if there is a profile for the Hispanic vote: "The mistake many of these pollsters make in trying to measure the Hispanic vote is they make an assumption that as Hispanics we only care about immigration, or immigration-related topics. What I have found across the board is many Hispanic want law and order; they want security, safety, opportunity to invest, opportunity to raise their family, get good jobs, a good education. That seems to be universal. The same thing applies for whites, blacks, brown."

Bovo has a take on the rioting and looting, not only last spring in Miami, but in other cities such as Portland, Seattle and Louisville that the media have never investigated: "The initial intelligence we got in the rioting here in Miami was that we had elements who were (not) from here. After a couple of days (we learned of) elements here of Nicaraguan government officials — Sandinistas — we had Chavistas from Venezuela (people fiercely loyal to Venezuelan dictator Nicolas Maduro), we had â€˜Castristas' (agents of the Cuban communist government), we had agents from countries that have a dual purpose. Number one to see harm come to Miami-Dade County, because (we) have been the refuge for all of those folks who fled those sick, perverse systems."

He sees the rioting and looting as one of several strategies to achieve their second purpose: "In a bigger picture they want to see Miami-Dade County and the country bend the knee. This is your Che Guevara wearing T-shirt guy, who wants to be the anarchist. What is sad is that any opportunity to engage in a real conversation about race, racial injustice and how do we become more aware of these things, has been hijacked by a bunch of latte liberals who are mostly well-to-do white kids going out and acting like fools with police and we lose the opportunity for a good conversation under this banner of justice. They're not interested in justice. They're just interested in destruction."

Florida Governor Ron DeSantis recently ordered all restaurants and other businesses open 100 percent. If local jurisdictions object, he said, they could restrict occupancy to no less than 50 percent.

Joe Biden has said he would shut the entire country down again if scientists say so. What does Bovo think of that?

"That's crazy talk. It doesn't (address) the reality of what small business owners are going through. What we have done to small businesses is atrocious. If I'm elected, I'm going to meet with all 35 mayors of Miami-Dade County. We are going to have one comprehensive plan for the entire county. What we see is a disconnect, the county doing one thing, some cities wanting to do something else. And the only people to pay a price for that are the residents of our communities. They are not getting a straight message from their government. I would go to a business owner and ask â€˜how would you keep your employees safe; how would you make your customers feel safe? I want to put it on their lap."

Not getting a straight message from government seems to be a problem that extends beyond Miami.