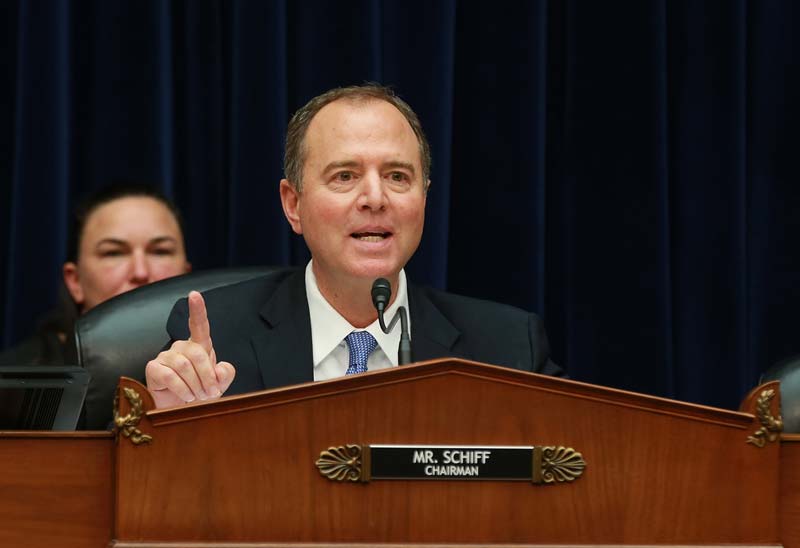 Kirk D. McKoy / Los Angeles Times
A 1961 "Twilight Zone" episode starred as a Central American revolutionary whose paranoia eventually leads to his destruction. The dictator he has deposed tells him about a mirror given to him by "an old woman," a mirror that will show him who's plotting to assassinate him. The revolutionary soon sees enemies everywhere and begins to unravel, picking off his comrades one by one, believing they are out to get him.

Fantasy, sure. But and Vice President Pence could use such a mirror to reveal those partisan forces attempting to carry out political assassination on the entire Trump administration.

The first anonymous whistleblower has tentatively agreed to meet with congressional lawmakers, according to , on the condition that his or her legal counsel is cleared to accompany the whistleblower to the meeting. No word yet on the second whistleblower's conditions.

This is all political theater and bad theater at that. are going through the motions of impeachment, hoping to thwart the president's re-election. They know the is unlikely to convict him should impeachment articles be approved. It's all about pleasing their base and fundraising, which both sides are doing. This is one of many reasons approval ratings remain low.

Ruslan Ryaboshapka, new general prosecutor, told Reuters that he was not aware of any evidence of wrongdoing by the son of former Vice President , but would be reviewing criminal cases opened by his predecessor, including some that could relate to the Ukrainian gas company, , a natural gas company that paid .

If , the prosecutor tapped by Attorney General to look into the origin of the phony Russian collusion probe, comes up with facts that lead to the indictment of anti-, will that make any difference to those smearing the president? It might in public opinion, which are trying to shape against the president, but probably not to the real conspirators and colluders, except perhaps some lower-level types. The Establishment always protects its own. Could it be possible that are rapidly pursuing the impeachment inquiry to soften any blows that might come from Durham's report?

That the president had to suggest Ukrainian and even Chinese leaders look into possible corrupt activity is its own indictment of the anti-Trump media, Obama administration holdovers and career prosecutors.

The conservative organization has been relentless in its pursuit of collusion by anti-Trump actors. It has released 145 pages of communications between former Deputy Attorney General and others which it says include a one-line email to special counsel . It said, "The boss and his staff do not know about our discussions." The communication included "off the record" emails with major media outlets (collusion?) around the time of Mueller's appointment and "show that Rosenstein did not dispassionately go along with the fraudulent probe in an attempt to get at the truth, but was an active participant in the deep state coup, secretly plotting with other FBI and DOJ officials against the president of ."

If true, why is that shocking, given the nonstop media assault on even before he took office? Their goal has been to impeach, or damage him sufficiently so a Democrat will win the next November. Consider the one-sided "coverage" in major newspapers, the broadcast and at least two cable networks.

More facts will emerge that undermine the narrative, but it won't matter to anti-Trumpers. They live in the Twilight Zone.